The Temple of Artemis

Monday, 24 August 2009. We left the more modern delights of the steam locomotive museum at Camlik and travelled to a car park by the side of a marsh. The ground was, thankfully, dry and covered in fallen stone. 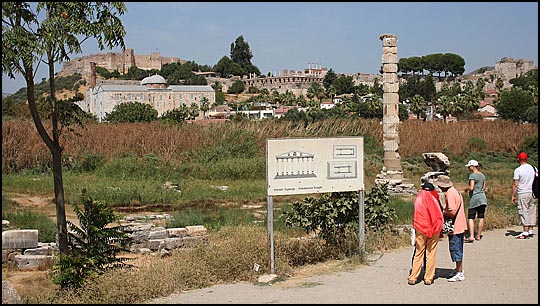 In one place a single column had been re-erected. I have seen photographs that look like the column rises from a lake... This was the site of one of the Seven Wonders of the Ancient World. The list of awe-inspiring buildings and sites of which the only one left standing in a condition to give sightseers any idea of what it may have originally been like is the Great Pyramids of Egypt. Of the sites, two were in Egypt; two in Greece; two in Turkey and one in Babylon.

You can get an inkling of what this temple may have looked like if you visit (as we shall, later on this trip) the Parthenon, high on its hill at Athens. But the Temple of Artemis was almost four times the size of the Parthenon. 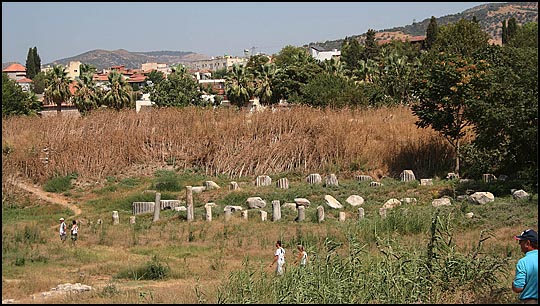 The Turkish Artemis is not the same goddess that the Greeks worshipped. She was a godess of fertility and hunting and was depicted with either many breasts or perhaps with eggs, hung from her body to represent motherhood and fertility. In fact there was evidence of five temples built one above the other. Wars, earthquakes and vandalism had done for them. The previous temple had been the pride of Ephesus. 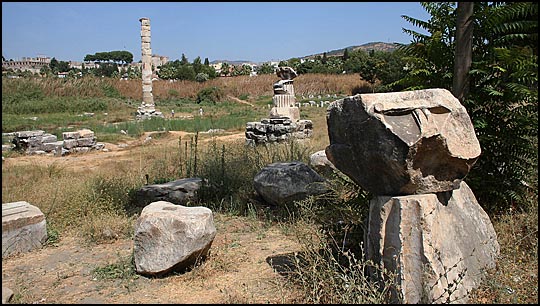 It was burned down in 356 BC by a young Ephesian, Herostratus, who wanted to go down in history. It was such a hideous crime that his wish was quashed by a law making the mentioning of his name punishable by death. And yet... we know it... The rebuilt temple that became one of the Seven Wonders was the first building to be constructed entirely of marble. 425 x 225 feet, it had 127 columns to hold up the roof. It was still under construction when Alexander the Great came here in 333 BC - by coincidence he had been born the night Herostratus had burned the previous temple down. The building reportedly took 120 years, although some now dispute this and think half that time would be a better estimate. 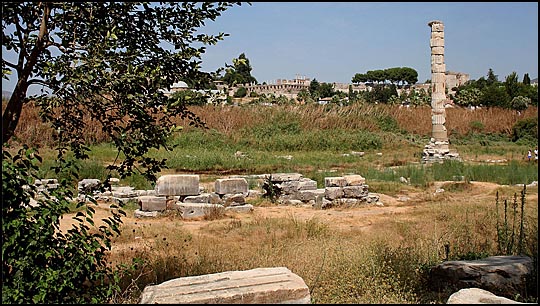 It was built on this marshy ground to try to save it from the effects of earthquakes. Silting of the river and coast had caused the ground to rise by at least 4 or 5 metres since the 8th century BC when the first temple had been built. To prepare the ground large quantities of charcoal and fleeces were trodden into the marsh. It stood until destroyed by the Goths in 262 AD when both Ephesus and the cult of Artemis were in decline. Constantine, the Roman, rebuilt Ephesus a century later, but left the temple crumbling. The single re-constructed column is all that remains standing of the temple. Beggars, mostly children, swarm around visitors with hands held out. Their controller, their Fagin, sits by his car, watching... 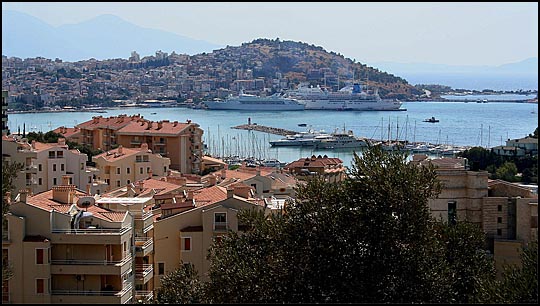 We didn't stay long. It was enough to see what there was to be seen and to be able to say we were there. The coach returned to Kusadasi and the Thomson Celebration, stopping on this hill for a photo opportunity overlooking the port and ship. That brings to an end our day in Turkey. Tonight the ship will sail back towards Greece, though we have a change in destination for tomorrow. We were due to visit the port of Thira on the island of Santorini. But the port is a tender port - the ship would anchor offshore in the lagoon of this island group and ferry passengers in by tender boat. The weather is such that this would be too dangerous and so we will be heading for Samos instead. 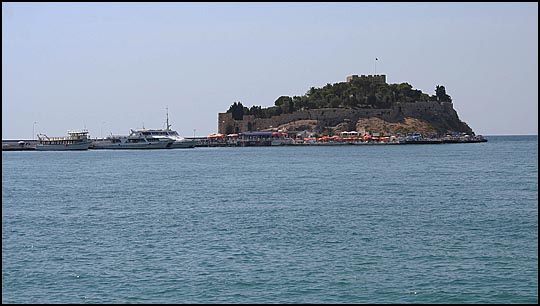 I took the photo of Kusadasi's fortress as we sailed out of the harbour.

Pearls of The Aegean Cruise Index
Posted by John Burke at 11:40