Currently I've been going through lots of enprint wallets, finding negatives from the 1990s that have either never been scanned before, or sometimes where the prints were scanned before I had a scanner that would do negatives. The enprint wallets themselves will probably make a blog post sooner or later as there are a few different sorts! For now though, this post covers a trip down to Copthorne near Gatwick airport for the Copthorne Jukebox and Collectables Show on 26 April 1998. 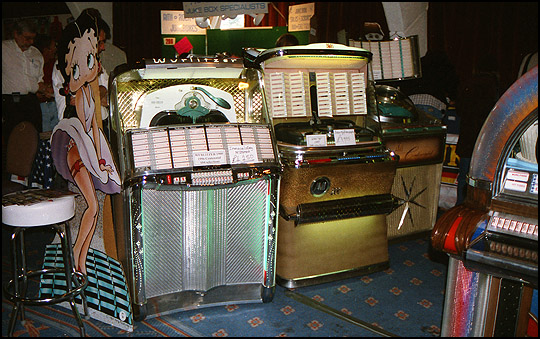 Whilst you have a look at the jukes I'll just fill you in on the previous day... We decided to travel down part of the way and stay overnight at a Travel Inn or something. However there was nowhere to be found and we realised too late that it was the London Marathon on the Sunday so tens of thousands of people had descended on London and the surrounding area looking for accommodation. In fact we ended up having to drive all the way down to the south coast and managed to find a guest house in Bognor Regis at 10:00pm that hadn't shut its doors for the night. 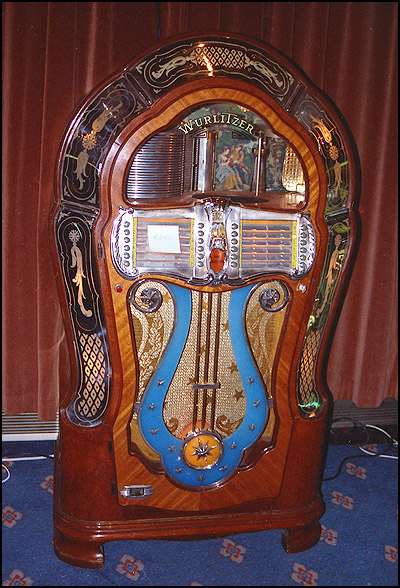 Jukeboxes started out in shops and bars in the 1930s and 40s, when records had to be played at 78 revolutions per minute (RPM) and the needles were usually made of steel and fitted into playing heads that were measured in pounds weight rather than fractions of a gram... The records were 10 inches in diameter and the early jukeboxes generally had wooden cabinets. These were the Golden Age jukeboxes. 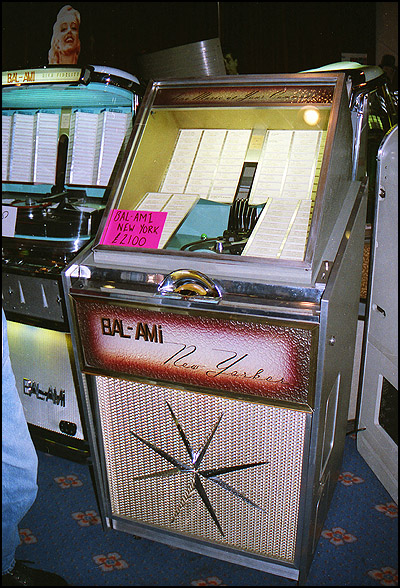 The Silver Age jukeboxes were those from the late 1950s through to the mid 1960s which played 7 inch 45 rpm vinyl records and had a visible mechanism so that you could watch the records being selected and played. At some point after that some boring moron said "I've got a good idea! Why don't we take away all the windows and just sell a box with a record player inside?" 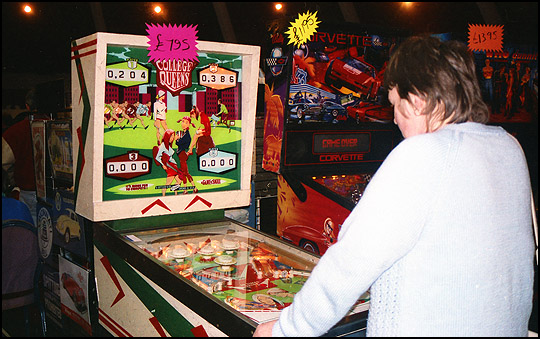 A chap called Bob Thompson at the time ran a business selling old pinball machines and had a working display of over 20 machines all on free play. The machine shown is Gottlieb's 1969 College Queens, a four-player version of the company's 2-player Airport which had been released a month before College Queens. This was an electro-mechanical game (i.e. before computer chips appeared in games) and had chime bars for sound - a bit like the Avon Calling doorbell. 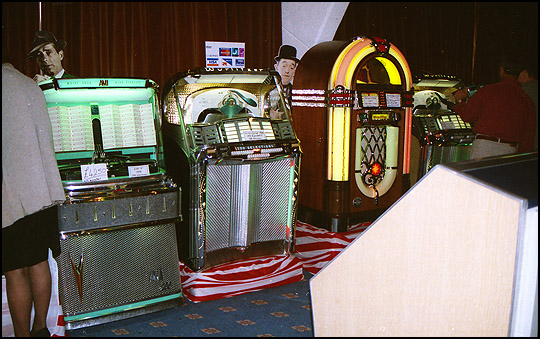 The Wurlitzer 1015 towards the right is the ultimate collectable jukebox with bubbles running up glass tubes and coloured plastics rotating behind the clear plastic behind the tubes so that they change colour repeatedly. They came out in the 78 rpm record era in 1945 and remained in production through 45 rpm and into the CD era. Reproduction machines can still be bought brand new. 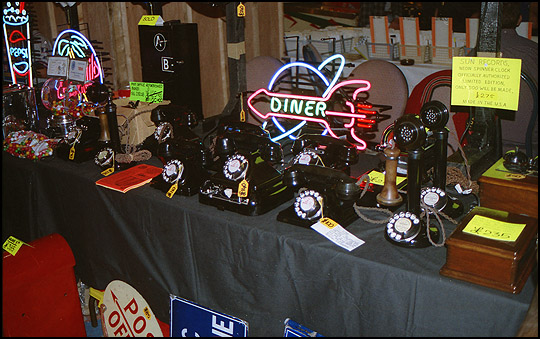 Other collectables were on sale too. Various stands had old telephones and neon signs for sale. 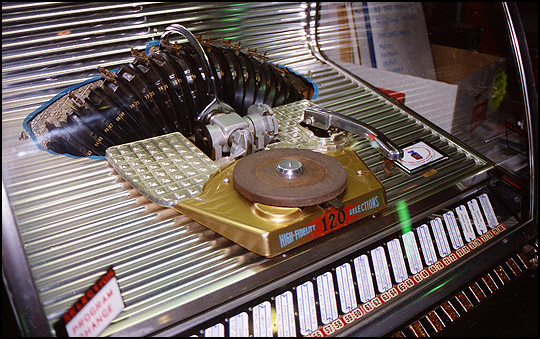 The jukeboxes holding 78s have a special fascination for me. The price of these though is well out of reach as working examples started at around 4,500 pounds in 1998! Note that I said "working" and not "immaculate"... 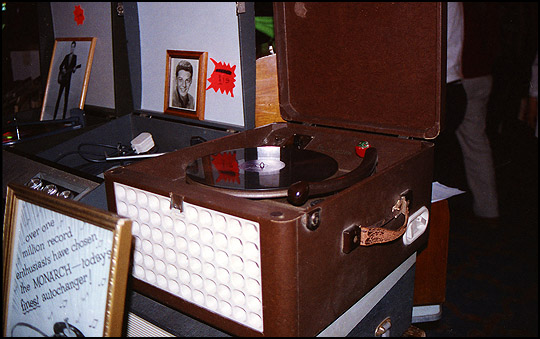 This 1950s record player was on the stall run by the chap from whom I bought a number of record players at another jukebox event - Jukebox Madness - one year. Most jukebox events have Dansette and other vintage record players for sale. In 1998 they were quite affordable, but not long after people cottoned onto the fact that they were becoming collectable and the price went up accordingly. 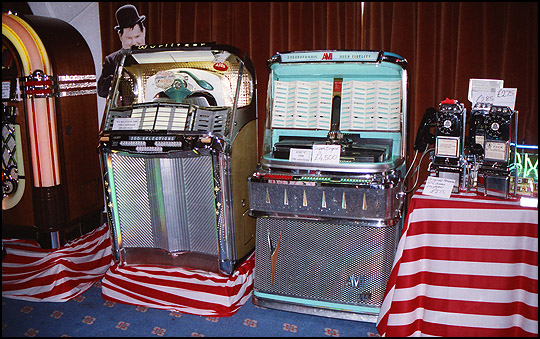 Ami went through a number of partnerships with BAL-AMI and Rowe-Ami being names that can be found on Silver Age and later machines. I have a Rowe-Ami RI-2 jukebox that is currently in need of a little TLC as it tries to select from the space between two records instead of plucking one out of the carousel... It's these little details that can make a big difference... 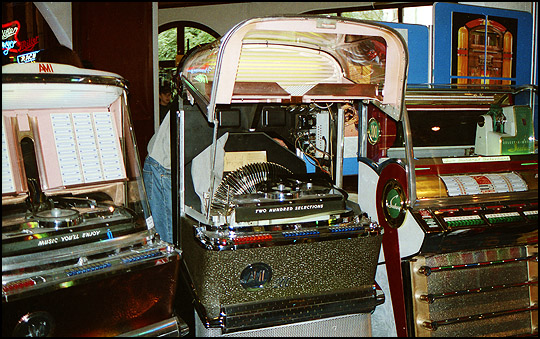 In the 1950s it became possible to produce curved glass and both car windscreens and jukeboxes were quick to take advantage of this. Here the hinged glass of the Ami jukebox has been swung up to allow access to the turntable. 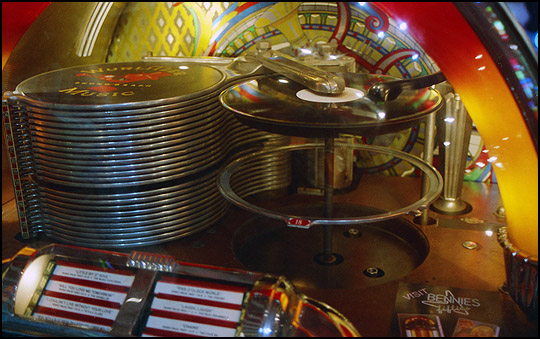 The standard Wurlitzer jukebox 78 rpm mechanism stored the 78s horizontally. The holder swung out and the turntable rose, lifting the record out of the holder up to the play arm that was up at the top of the cabinet. This meant that only one side of each record could be played. Somewhere is a load of 78s that are knackered but with immaculate B sides... 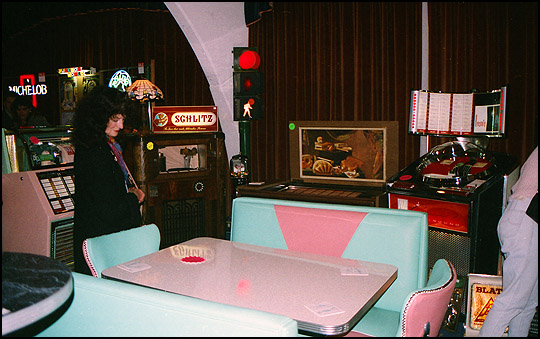 Diner-style furniture and an Ami Continental jukebox, as seen in the film Ghost on the right. Next to the Wurlitzer 1015, this is the second most collectable jukebox. 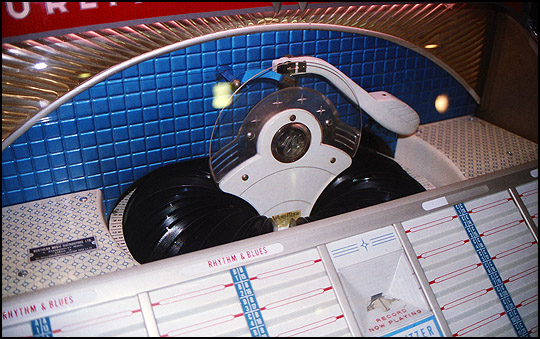 The Wurlitzer 45 rpm mechanism was a carousel that stored the records which were played against a vertically spinning small hub turntable. The playing arm has a stylus fitted on both front and back to allow both sides of the record to be selected. On the small blue arm near the playing head is a small brush which brushes the stylus free of any dust or debris between each play. 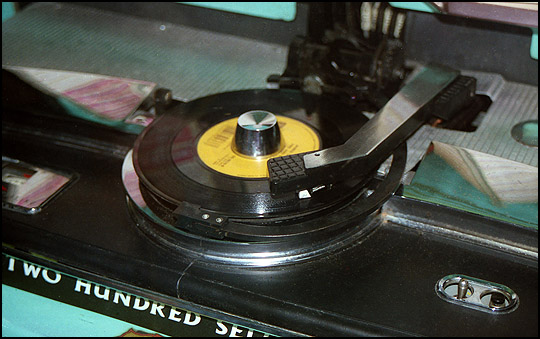 I'm not sure what this jukebox is - possible a Rock-Ola which was another of the "Big Four" of Wurlitzer, Ami, Seeburg and Rock-Ola. 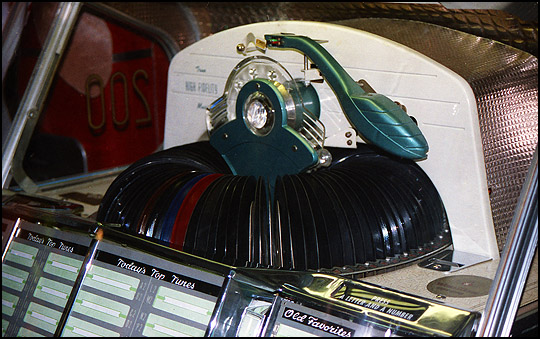 Another late Silver Age Wurlitzer from the 1960s. 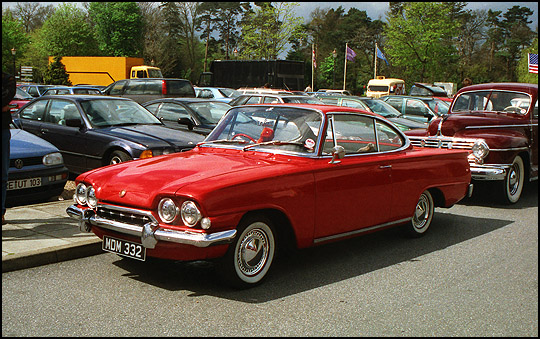 And finally a couple of classic cars which were parked outside the main entrance. This is the first Ford Capri, a 1964 coupe model based on the company's Consul Classic, which was the first British car with double headlamps at the front. 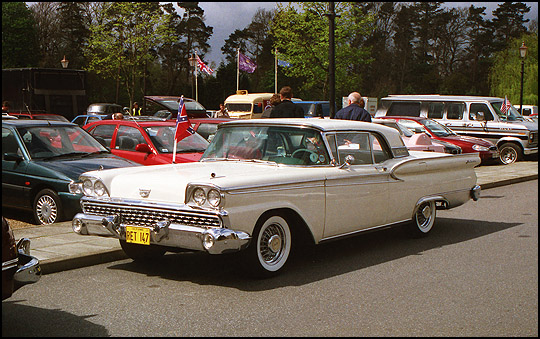 Anyone turning up in an American vehicle could get in free. A nifty way of ensuring that some would turn up for people to look at!

Last night found us driving out to Garstang to play for a Golden Wedding party for two lovely people who have booked the band in the past, several years ago and remembered us from then. 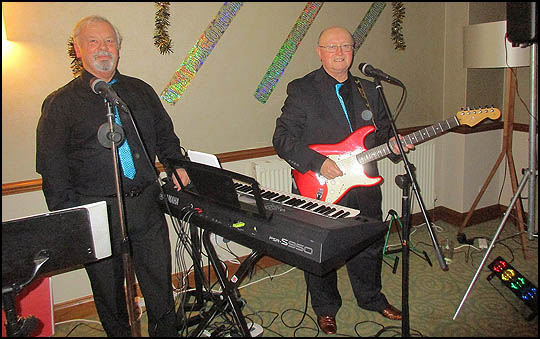 The format of the party roughly followed the format of the wedding, 50 years ago, with speeches by the Best Man and Groom. There was an Irish Raffle. We hadn't heard of this before but basically prizes chosen had to remain on your table in front of you and more tickets were drawn than there were prizes. Once the stock of prizes ran out, winners were allowed to pinch a prize from someone else, which made for a lot of fun and a much-travelled bottle of champagne! The tin of beans didn't move about anywhere near as much...! 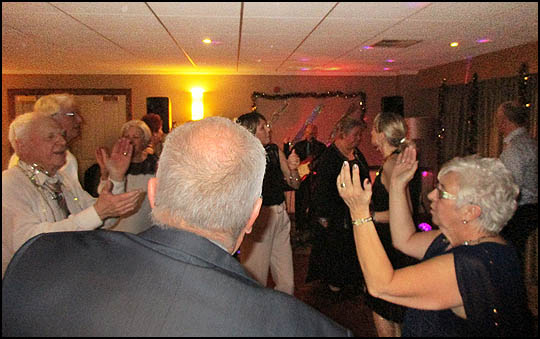 Barry and Marlene, it was a pleasure to play for you again, I just hope we have that sort of energy when another ten years goes by to Miss Franny and my own 50th Anniversary! Heck... I wish I had that much now! 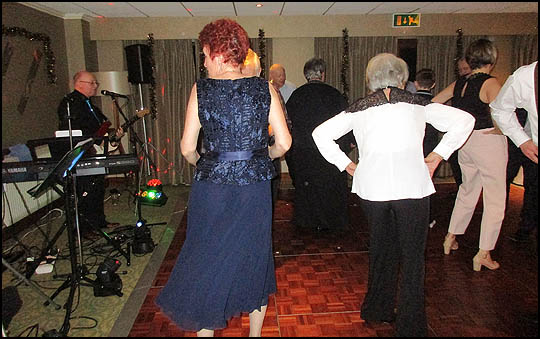 And just to bring past gigs up to date, here's a couple I missed over the Christmas and New Year period... The 29th December saw us out at Darwen, playing at the house party of some long-standing friends. Very informal and lots of fun. We were pipped at the post this year and missed out on a hat-trick of winning Brian's quiz... 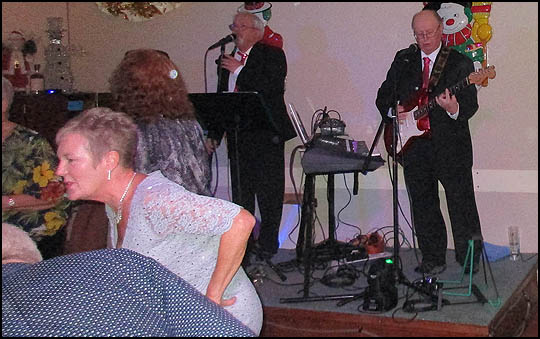 New Year's Eve saw us playing at the Thurlby Club in Preston, where we had played earlier in the year. A game of Bingo was held to raise funds for necessary repairs to the roof. David won and donated the prize back with a wish that they did the bit over the stage first...! A really good night with a load of laughs!