Met up with several friends at the Shrewsbury charity gig, but one in particular - Hayley Easthope - has given me lots of postcards in the past and presented me with a bunch of World War One era postcards as we got together. I'll show them over several articles as there are a few different subjects - a collection of views of Amiens, a comic postcard booklet collection about the Mannequin Pis in Brussels and a handful with messages from the War and just after. 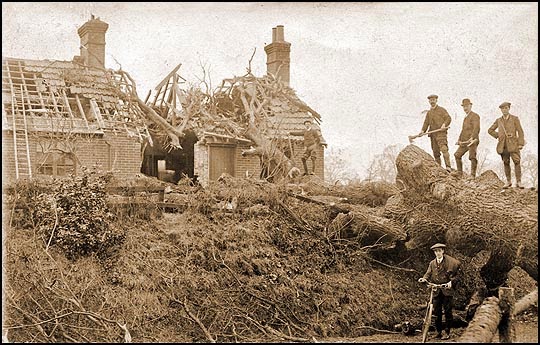 I'll start with this one though. The original is very faded and I expect was taken by a local photographer and hastily produced due to the topicality of the subject matter. Unfortunately the stamp has been removed which robs the card of its dated postmark, but it was removed without enough time or water as the stamp has ripped and the fragment remaining is a green halfpenny stamp of King George V, whose reign began in 1910. 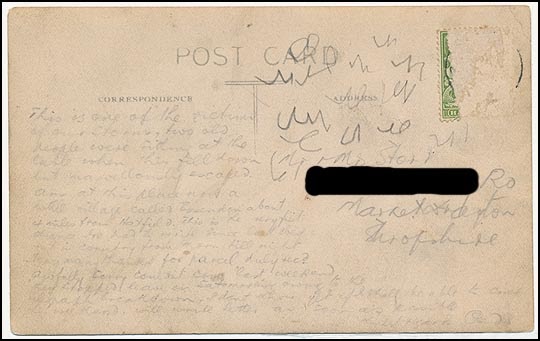 The postcard was written in pencil which has also faded badly, but by scanning it and playing about with tone, contrast and brightness I think I've managed to decipher the tiny writing - the sender managed to fit quite a sizeable message on his card. Plenty of value for a ha'penny which in today's money is just £0.0020833 - only just over a fifth of today's penny.

I suspect the writer was training in the army as "leave" is mentioned and quite possibly was on placement working on a farm from a comment about working hours. They signed with a bit of a squiggle which I'm afraid I can't make out.

This is one of the victims of our storm. Two old people were sitting at the table when this fell down but marvellously escaped. Am at this place now, a little village called Essendon about 4 miles from Hatfield. This is the very first chance I've had to write since last, they work in country from morn till night.

Very many thanks for parcel duly rec'd awfully sorry couldn't come last weekend they stopped leave on Sat morning owing to the telegraph breakdown. I don't know yet if I shall be able to come this weekend, will write letter as soon as possible. Kind regards...

By the time the photographer reached the scene to take his photograph the fallen tree has been chopped and sawn into several parts, but it is possible to get a good idea of the size of it and the damage it did to the house that it fell on. The old couple at their table had a lucky escape indeed!

Post Script: Hayley has messaged me to say - The sender was Edgar Pedley my dad's uncle. He served in the signals. (which explains why leave was cancelled due to the broken telegraph! - John) I have a photo of him in uniform.

Back to the Edgar Pedley Index
Posted by John Burke at 21:15 No comments:

On Sunday night we played at "Sean's Fundraiser", a charity event in aid of a very poorly little boy, critically ill with leukaemia and lymphoma cancer. We came to hear of this from his grandma, who we met through the Billy Fury networks. 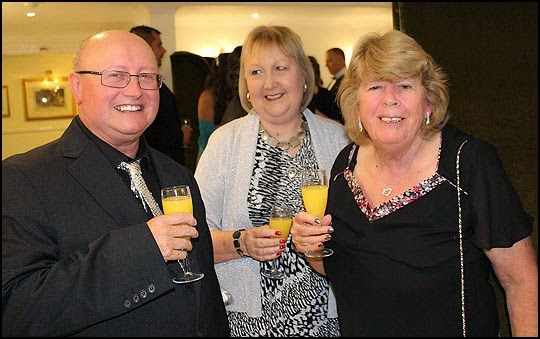 And we met up with Mags and Marie, also friends from the Billy Fury website http://www.billyfury.com. 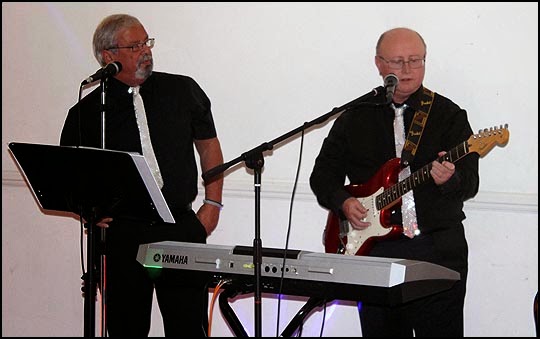 This fundraiser was held at the Albrighton Hall Hotel in Shrewsbury and included a delicious three-course meal and a charity auction and raffle before we were called upon to sing for our supper. 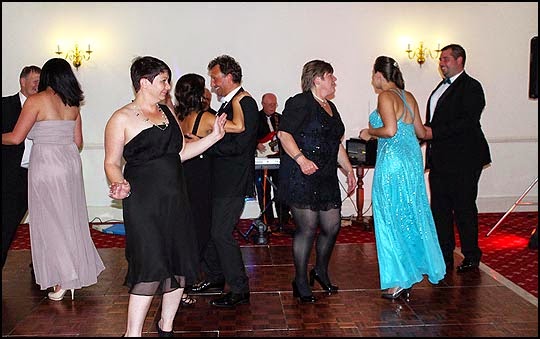 As the auction came to an end, there was one final lot - a chance for the organisers, Gaynor and Rhian and the auctioneer, Jeremy to undergo this ice bucket craze. "Crazy" is the word I reckon, but it is in a good cause. Rhian went off to change into one of the hotel's towelling dressing gowns but Gaynor sat down in all her glam and serenely took her dousing. (Is "serene" the correct word for jumping up and screaming?) 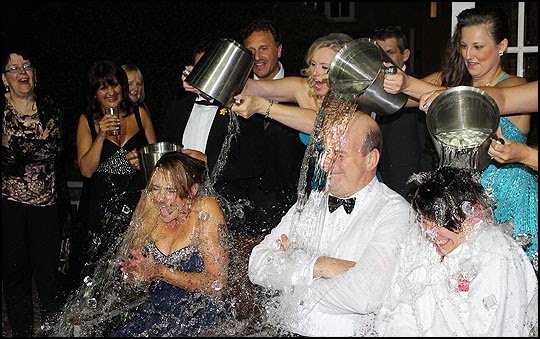 Anyway, well done to all three. Rhian was able to go and put her glamrags back on whilst Gaynor spent the rest of the evening in her dressing gown...

But there again, how many times (apart from at home with the gorgeous Miss Franny) do I get the chance to cosy up to beautiful ladies in their dressing gowns? ...and before you ask, the lipstick mark on her face is not my shade... Massive thanks to Sean's gran, Hayley Easthope for involving us and for adding yet again to my postcard collection! Great to see Hayley and Steve again at the do.

Saturday night saw us once more at the fabulous Coast Riders Diner Bar, playing for Pete's 65th birthday. Themed as Luau-cum-holiday night, the room was filled with rather loud shirts and one or two snorkels... 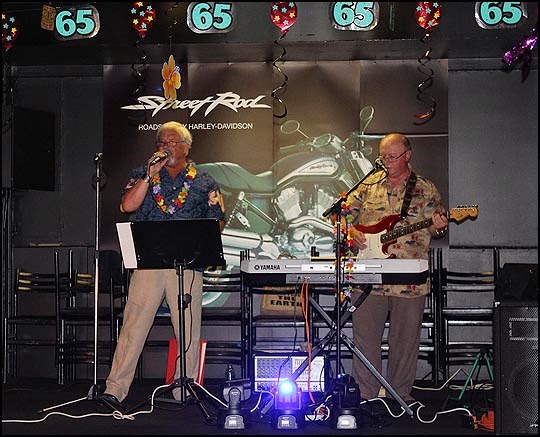 An interesting night - I was playing against a persistent tinnitus background hiss and was a bit paranoid that I might not be able to hit the right notes. I mean singing rather than the odd guitar/keyboard whoopsie! Anyway a few new tunes got unveiled. Apart from Pete's birthday it was the anniversary of Elvis's passing so In The Ghetto got a first play, as did a 3-song medley of Teddy Bear, Don't Be Cruel and Hound Dog. The last time we were at Coast Riders I made a rash promise that we would come up with a version of Roy Orbison's Penny Arcade and also The Beatles' P.S. I Love You came out.

And I have an awful feeling we may have... no surely not... but yes... I definitely remember playing Dancing Queen...

The Secret of Stamboul / The Spy In White

In the last article I had mentioned reading Dennis Wheatley's The Eunuch of Stamboul and that I had greatly enjoyed the film of the book a long time ago and thought I'd probably not get the chance again. 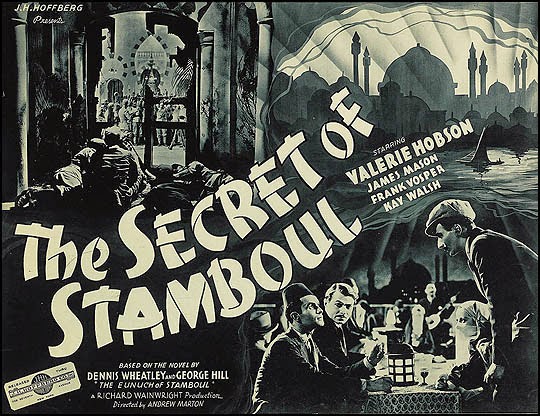 Wrong! After I published that article I googled the film under the title The Spy In White which was the title of the 1939 re-issue. It came out just after the success of The Spy In Black... Clever eh? Do you see what they did? ...er yes actually...

Anyway the original title on its initial 1936 release was The Secret of Stamboul. Although James Mason takes the hero's part and probably gets the most screen time, Valerie Hobson at a gorgeous 19 years old has the starring credit. She plays Tania, the daughter of an exiled Russian Countess who is blackmailed by the villain of the piece into working as an agent for him.

This villain is Kazdim, the ex-harem eunuch (though the "ex" only refers to the "harem" part of that description) and now the Chief of the Secret Police. Being the star of the show, Valerie's character takes a slight divergence at the end of the film to the Tania of the book and comes to the end of the film a much happia Tania. Incidentally, almost thirty years later Valerie Hobson was the wife of disgraced politician John Profumo who got caught up in a bit of a scandal... 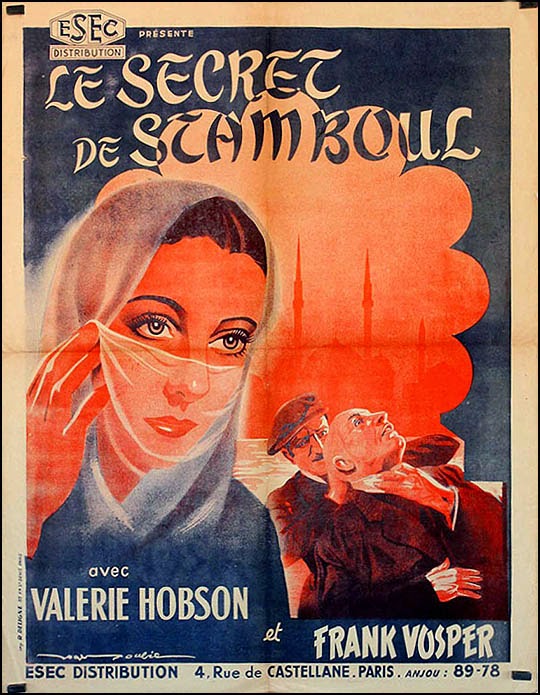 James Mason doesn't even get a mention on this French poster of the film. It was only his second screen appearance. He plays a competent part and looks the hero throughout. After slogging the loutish Turkish Prince Ali, that worthy aristo snarls "I'll not forget this!". Mason's character, Larry Destime, looks coolly back and says "A well-taught lesson should never be forgotten, your Highness."

Frank Vosper plays the fiendish Kazdim, playing the part with gusto and obviously enjoying himself immensely. An actor since 1919 and in films from 1926, he would only make one more film after Secret of Stamboul before he died falling overboard from the ocean liner SS Paris

The Google results took me to a DVD site in the U.S. who had the film and at quite a low cost. The shipping was as expensive as the film... Watched it the other night. Wonderful!