I know! A full month without a post! You lucky people! But here I am again, having spent a number of weeks with my brother trying to get to a state where we could sort out the probate following the death of my unmarried uncle. Until that happens there will be scant news of the process and findings, but I now know where my hoarding genes come from. Not just the collections of my uncle but of family members I have only just found out about... I never knew the names of my great-grandparents until we started on this, but now I've started to draw up a family tree. How long before I find myself out on a limb, I wonder...

Anyway, I can't see any harm in having a quick look at some postcards from the 20th century that various family members sent or received. There could be more of these to come... 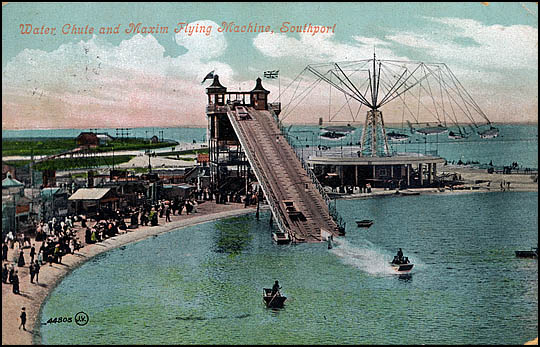 Sent home to Castleton, Rochdale from Southport by my Great-Grandad to my Great-Grandma who, for whatever reason, had been left at home. 24 September 1906. "Arrived safe about 1/2 past 1 o'clock. The weather is grand here. Yours W.T.B."

W.T.B. was William Thomas Burke, my Great-Grandfather. He's not exactly pouring his heart out here, but it would be too easy and perhaps unfair to draw conclusions from so few words. Funny though that I never even knew his name until now... The rides are long since gone from Southport, but just up the coast in my own home town of Blackpool the Pleasure Beach still has their own version of Sir Hiram Maxim's Flying Machine still in operation. Sir Hiram originally wanted to install controls so that riders could send the gondolas up or down but with thoughts of cars stalling and diving or simply being too low when the ride slowed and crashing into the landing stage, the request was denied, leading to the designer dismissing the ride as "merely a roundabout". 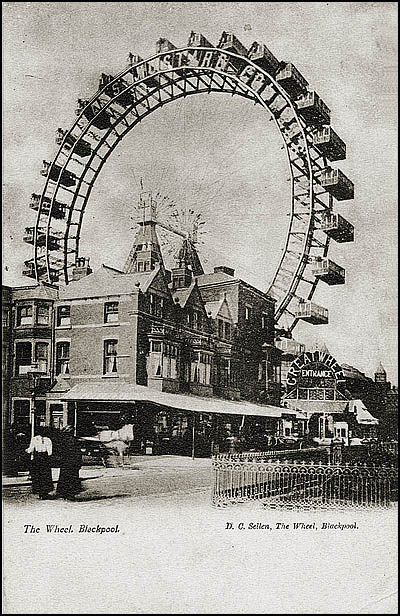 Sent by "Emily" to my Great-Aunt Cissie on 19 August 1907. "Dear Cissie, I arrived on Saturday at 11:30am. Enjoying myself very well and I hope you are, though you are at home. The weather is nice so I hope to return in the best of health. Your affectionate friend, Emily." Cissie was my Grandad Burke's sister. 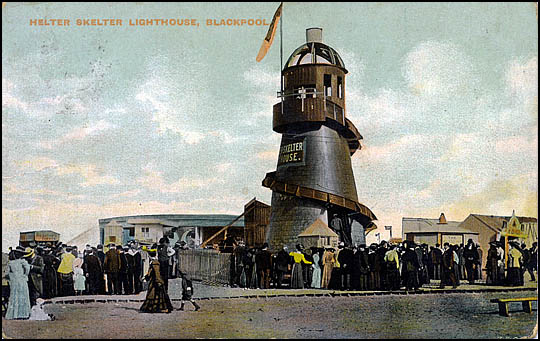 Another Blackpool postcard sent by my Great-Great-Aunt Florrie home to her mother in Rochdale on 22 August 1907. "Dear Mother, I am still enjoying myself. Yesterday we went on the Helter Skelter and got stuck in the middle. On Thursday we kept having showers, but never keeps us in. Florrie". Florrie Woolfenden was the sister of my Great-Grandmother on my paternal grandmother's side. 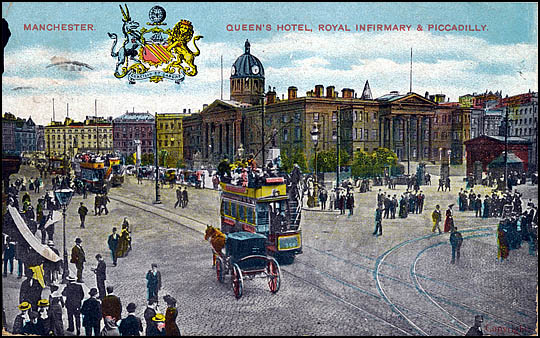 Manchester Piccadilly - somewhat different to the present day! This card was another sent by "Emily" to my Great-Aunt Cissie in Castleton, Rochdale on 29 November 1907. "Dear Cissie, I was glad to hear from you and will meet you at quarter to seven. Please bring programme if for entrance. All are well, have plenty of time to talk tomorrow, your loving friend Emily." Cissie at this time would have been aged somewhere between 10 and 14 I think. I only remember her as a quite wrinkled old lady who had never married and who chain smoked unfiltered cigarettes. I rather think though that she was quite a character during her youth and there's a super photo of a very confident young woman in full 1920s flapper-style complete with head dress that will no doubt find its way onto the blog at some point. 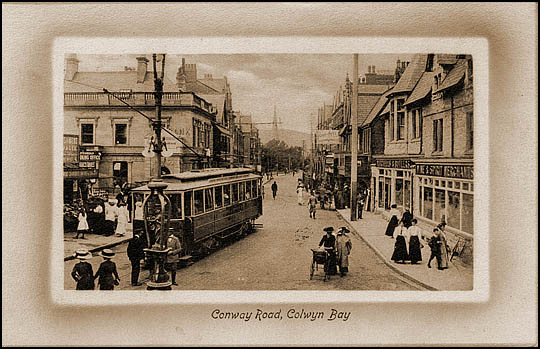 Five years later Cissie sent this card from Colwyn Bay back to her mother (my Great-Grandma Burke) in Castleton, Rochdale on 17 August 1912. "Dear Mother, Arrived here quite safely, got lovely digs. Rained here this afternoon, fine now. We are rather a long way from Colwyn Bay centre but in a nice position lovely scenery. With love from Cissie." 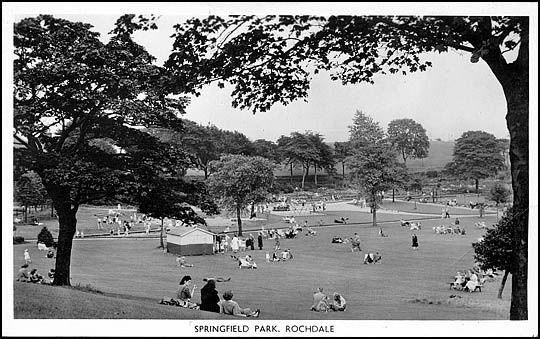 A local postcard sent from their home town on 7 September 1961 by my Grandad and Uncle Geoff to my Grandma who was on holiday at Morecambe Bay Holiday Camp, Heysham. "Dear Mum, Hope you are having a good time. Have you won anything at you know what? We expect to arrive on Saturday between 2-00 and 2-30. Love Geoff and Dad"

The mention of winning refers to whist drives - she would play every night if possible and would sometimes tut or grumble under her breath if my Mum and Dad insisted we play for matchsticks not pennies when she played cards with me and my brother when we were small! Yet she would have gone mad at the thought of gambling in any other way. Inflation has gone mad here - all the postcards from 1906-12 were sent for a ha'penny (a halfpenny - pre-decimal coinage. 24 of them would be the equivalent to a 5p coin today, though that ignores inflation). In 1961 it cost tuppence ha'penny or 2½d, equivalent to 0.521 pence of today's money without inflation. Just to be clear, that's £0.00521 pence... Add in the effects of inflation and today it costs 56p to send a postcard second class or 65p first class. There was only one class of postage in 1961 and post was delivered twice a day.

Comments on a postcard please...