After five long years of work on Blackpool's tramway system, it is getting back to working order with the introduction of the new Bombadier Flexity2 trams. 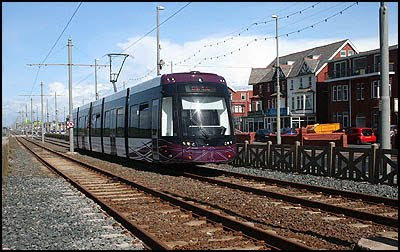 They are sleek, they are fast, they are quiet. Not all those necessarily being desirable on a crowded Promenade, but I'm sure they will come into their own on the fenced tracks towards Fleetwood. 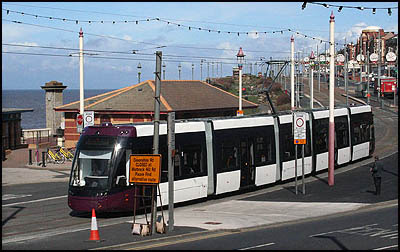 They are now becoming a familiar sight on Blackpool's system, though the full fleet has yet to be delivered. Eventually there will be 16 of the Flexity 2 trams based at Blackpool.

To see them to their best advantage you need to choose your spot wisely. They can be well camouflaged! 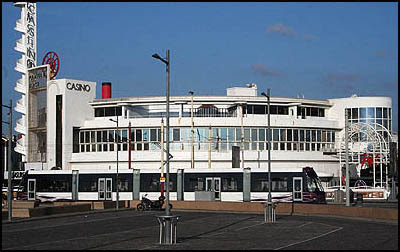 There was a lot made of a derailment at Fleetwood on the first day of operation. This was caused by sand blown from dunes on the beach. "Did they not know sand could blow?" cried the critics. Yes I expect they did. How long does it take to fill a track groove of around an inch deep I wonder? Five minutes? Ten? Not a lot anyway. It would be pretty stupid to have the trams drive at walking pace so someone with a broom could keep an eye on the track.

The problem at Fleetwood is that the dunes should never have been allowed to develop in the first place at that spot. They are a modern natural development. The authorities not having done anything to stop them coming into being, conservationists now claim they "teem" with wildlife and cannot be removed. The alternative would be an unsightly wall blocking the view of the beach to keep sand from being blown across the tracks - I suspect no one wants that either. 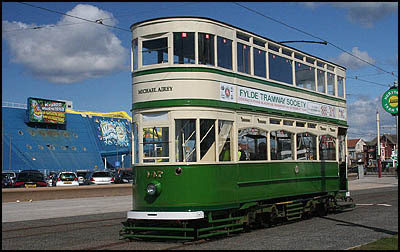 Despite many concerns about modern trams not being a tourist draw, a number of the heritage trams will be seen out on the tracks, operating between the Pleasure Beach and Bispham.

Return to Blackpool Tram and Bus Index Page
Posted by John Burke at 09:24 No comments:

Yesterday we played at the award-winning Elgin Hotel, Blackpool for an after lunch event for British Gas Pensioners. 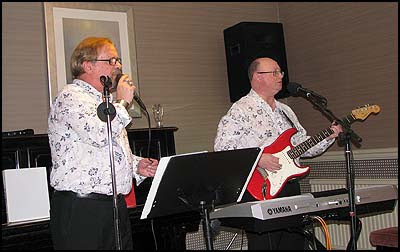 This was our second event for the organisation and we hope they enjoyed it as much as we did. I rather think that they did from the comments we received!

And no surprises that the hotel wins awards because the food was excellent and every time we have played there, the friendliness and helpfulness of the staff has been top notch.

Our next public performance will be at Blackburn's Witton Park on Sunday afternoon, 13 May 2012 - come and meet us and say hello between songs!

Just to bring you up to date on a couple of projects.

I'm currently involved in putting together a book about Blackpool. Commissioned by a publishing company it will be a collection of old postcards with modern views taken from as near the same viewpoint as I can get.

There are several old postcard views of Blackpool on the pages of this blog but these will be ones that I haven't published before and hopefully a good many may not have been seen since they were sent through the post some hundred years ago!

There's no end of old postcards available of Blackpool two of which are shown below. These will not be in the book... 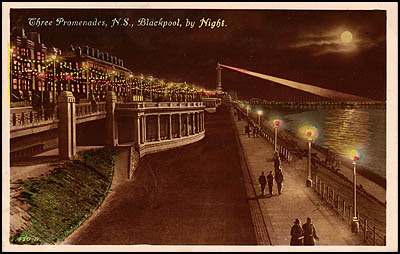 I love these old photos with a certain amount of artistic licence! This is a daylight shot as can be easily seen from the shadows of the railings etc. The festoons of lights on the upper Promenade are if in scale, around the size of footballs...

But here's the same photo with a bit more paint... 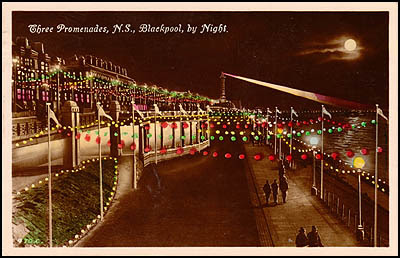 There just weren't enough light bulbs on that other one so the company artist has added a few more strings, some flag poles to dangle them from and for good measure a string of them around the grassed area where in reality they would have been broken within ten minutes or so...! I'm indebted to Chris Wynne of Shrewsbury for the kind loan of many postcards from his collection.

The book will contain around 90 photographs in 45 pairs and will probably be published somewhere in time for Christmas. Keep looking in for more news.

The other project is another book - this time a novel. I wrote this in the late 70s and early 80s but had put it on the back burner to be something of a retirement project.

However with ebooks bringing publishing within reach of everyone I've dusted it off and tightened up a few bits. The book is a fantasy take on the King Arthur and Merlin legends, the older of which contain much by way of elves and enchantments and lots to get the teeth into! Arthur in this book is a little removed from most people's idea of who Arthur was or may have been! It will be called King and King To Be.

I'm currrently waiting for cover art to be completed and then it will make an appearance, at first, for the Kindle and then hopefully... who knows?

As there have been a few literary John Burke authors - one writes history titles and another wrote film and TV scripts and adaptations amongst other genres, I shall have to adopt pen names. Non-fiction under the name John D. Burke and fiction as J.D. Burke.

Email ThisBlogThis!Share to TwitterShare to FacebookShare to Pinterest
Labels: blackpool, book, kindle, king and king to be, king arthur, postcard 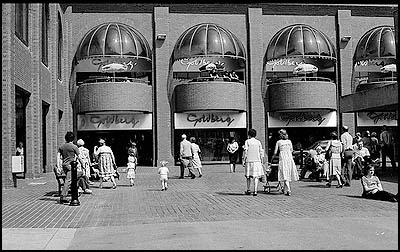 It was taken in July 1982, at a time when the Houndshill shopping centre - I can't remember anyone calling it a "mall" then - was fairly new. This was the "rear" entrance, with the main entrance on Victoria Street.

Someone asked what shop occupied the Goldbergs site in 2012, so I went down yesterday to take a photo from the same viewpoint. 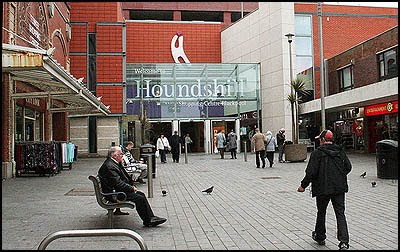 There has been considerable change. More than is immediately apparent.

The people approaching the doors of the centre in 1982 could instead have turned right and walked down a side street that would have brought them to the Argos store on Albert Road. There was an exit from the Houndshill multi-storey car park that utilised this road.

Because the road was narrow and heavily used by pedestrians, cars leaving the car park posed a risk and the exit was closed and the front of the shopping centre extended forward to block access to and from the side street.

Just inside the entrance now on the right hand side is a Costa coffee outlet and, behind that, the whole interior of the mall has been extended south to lead down into the new Debenhams store.

Return to Blackpool Town Index Page
Posted by John Burke at 09:10 No comments: