Last Saturday, the 18th, we performed for the second of our own charity gigs of the year. Usually we do these every two years, but the response after the April one was such that we set about organising this one almost immediately. 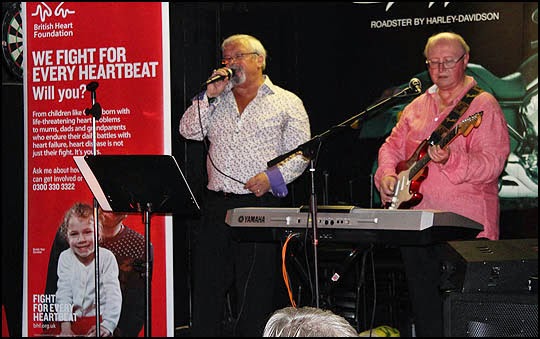 It's for an invited audience, but we always have a few new faces at these events, brought by friends or family. Miss Franny and Miss Jeannie were kept busy on tombola and raffle with help from daughter Gillian and a few friends. We already had lots of raffle prizes but special thanks must go to all those who turned up with more, including an expensive pair of hiking boots which made their winner very happy! 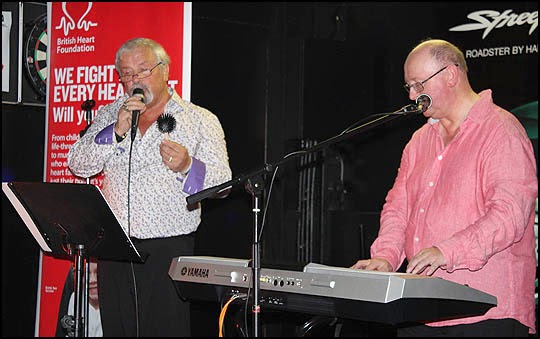 David sang to a hairbrush for some reason during "Wooden Heart" - he claimed someone called Elvis did the same thing in a film... I don't know...

A special mention must go to Peter and Janet at Coast Riders Diner, who not only provided us with a free venue and food but also added a very generous sum to the pot and we ended up (so far) with a collection of £710 for the British Heart Foundation. Someone from the Coast Riders people asked us to play Johnny Preston's Running Bear, a song we've never done before, but hey - if we know the song we love a challenge and they were incredulous that we'd never played it before! I was a bit incredulous at the key David chose to launch into, to be honest, but that's a different matter. I'm now designated to come up with a polished version for the next gig...

We now take a short break from gigs as Miss Franny starts radiotherapy. Little did we know in April when we did the gig for Cancer Research that we would be in need of the results of that research within 6 months. But things are progressing well. As for the Heart Foundation, well I'm already a heart attack survivor and David carries a second one in the shape of a pacemaker in his shoulder. He claims this makes him a Time Lord, but the dalek he tried to intimidate was having none of it... 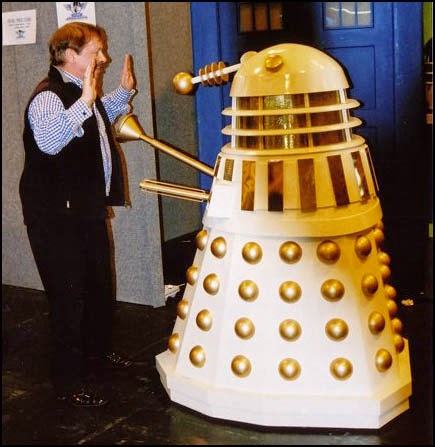 Last night we were out at Charnock Richard Football Club to play at a charity night. What a brilliant night it was too, lots of people all round the room singing along with us. I unveiled my new solo song as a nod to Sheridan Smith's fantastic performance as Cilla Black in the recent TV 3-part bio - Cilla's You're My World. It certainly got a good reception - David might not let me sing it again...! 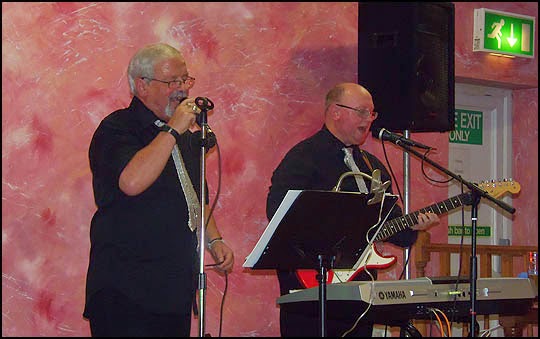 A cheque for £2000 was presented to Lancashire Air Ambulance from the Heskin Hall Steam Fair back in June and there was a huge raffle and the auctioning of a beautiful hand-made wooden old-fashioned lorry loaded with barrels. And I do like a gig where we pick up a couple of bookings for the future!

Today a quick post - it's been a busy week, family things are taking up quite a bit of my time at the moment so to keep the blog going, here's a few postcards of steam trains in South Africa that were brought by Marlene of the Ladies-Over-The-Water (a while since they were featured) when she came for a visit in 1997.

The actual cards are up in the attic somewhere just at the moment so I can't be much more specific than "South Africa", though at least some are of the Orange Free State and Bloemfontein. Awesome photos though! 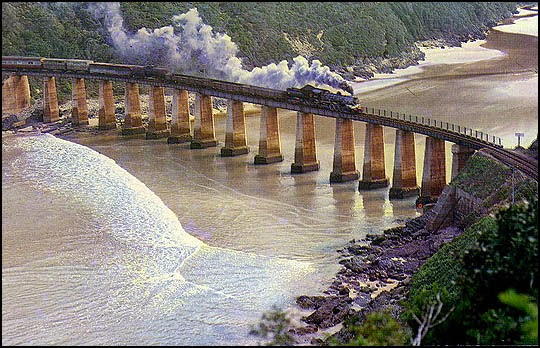 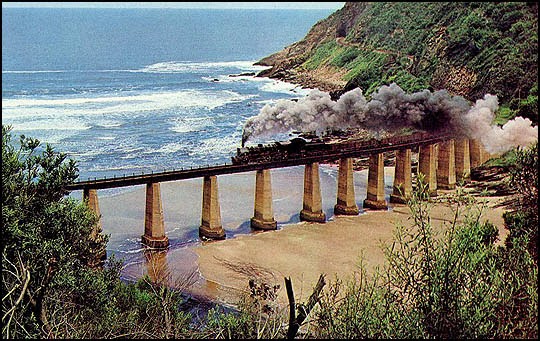 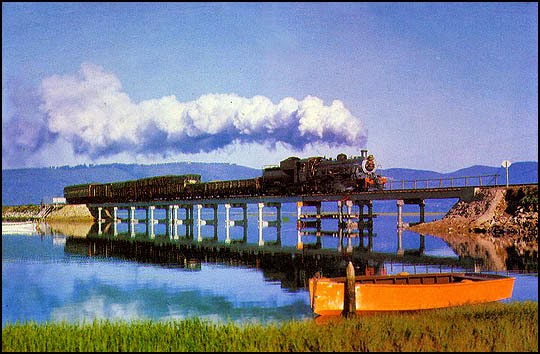 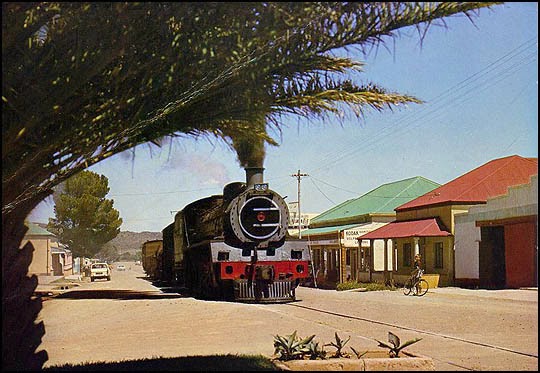 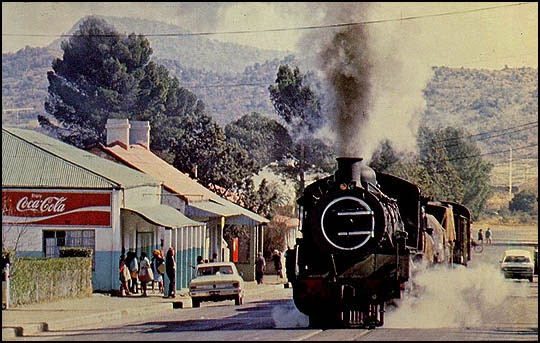 WWI Postcard From The Front

The last we heard from Edgar Pedley of the 59th Signal Corps, it was 1916 and he was about to leave for France.

It's now 18 March 1917. Edgar is on Active Service and the postcard he sends is simply postmarked "Field Post Office". A crimson stamp mark attests that his comments have been passed by the Field Censor. 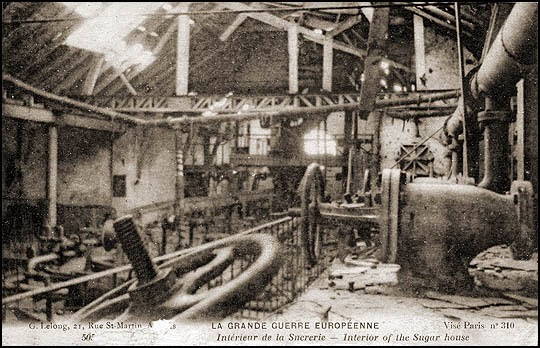 The postcard is one of a French series "La Grand Guerre Européene" ("The Great European War") - even at this stage it was becoming known as "The Great War"... We don't know where the postcard was sent from - the postcard looks as though it once gave the location away, but this has been rubbed or scraped until the name has been obliterated so that if it came into the hands of the enemy they would not be able to tell where Allied troops were stationed.

Either the U of "sucrerie" was placed upside down by mistake or every U had been lost to war damage and the N inserted as most people (French speakers at least...) would know what was meant. Edgar filled every available space on the back of the postcard yet without giving away any secrets - no mention of his unit or place names, or his rank. In a short sentence right at the top of the postcard he writes: "Read page 3, column 4 Mail Mar 17th" Obviously significant in some way, but I've not been able to find a copy to see. It's possible that this message could have been added later. I can't imagine that Edgar would have managed to read the paper from France only the day after it was published. 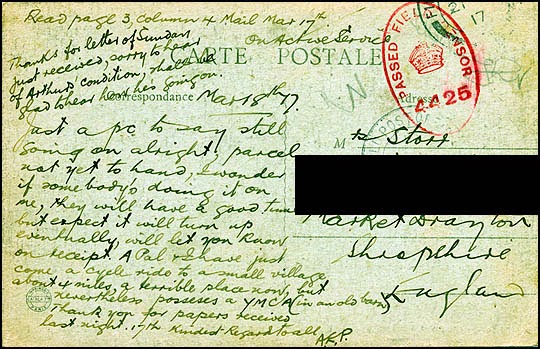 There is another postscript added towards the top of the card but in the order that I suspect Edgar wrote his card, he says:

Just a pc to say still going on alright. Parcel not yet to hand, I wonder if somebody's doing it on me, they will have a good time but expect it will turn up eventually, will let you know on receipt. A pal and I have just come a cycle ride to a small village about 4 miles, a terrible place now, but nevertheless possesses a YMCA (in an old barn). Thank you for papers received last night, 17th. Kindest regards to all AEP.

The postscript at the top reads: Thanks for letters of Sunday just received, sorry to hear of Arthur's condition, shall be glad to hear how he's going on.

Postcard from the Hayley Easthope Collection.

Back to the Edgar Pedley Index
Posted by John Burke at 14:24 No comments: