Over the years with all the cruises we have undertaken, we have seen quite a number of ships in various harbours mainly in the Mediterranean, Aegean and Adriatic seas. This series of articles, of which this is the first, gives me a chance to catalogue them and present the photos as a collection rather than their being dotted here and there amidst other more general holiday photos. This particular series will not include ships that we have travelled on, as I intend to do a separate series with an article on each of those ships at some point in the future. 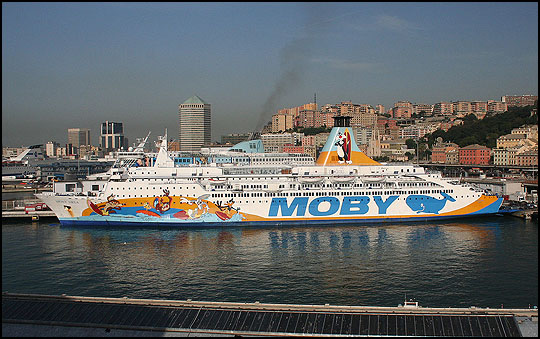 The Moby Drea, seen here in Genoa in August 2007. It was launched in 1974 as Tor Britannia, for the Swedish Tor line. In November 1977 she was involved in a dramatic rescue of the crew of a Roll On-Roll Off (RO-RO) ferry, the Hero as that ship sank due to a storm. In 1991 after renovations she was renamed Prince of Scandinavia. She ran aground off the island of Elba in 1997, enjoying the experience so much she did it again also off Elba in March 1999. Luckily she suffered no great damage on either occasion. Third time lucky perhaps... Bought in 2003 by Moby and renamed Moby Drea, she cuts a dashing figure with the Warner Brothers cartoon figures incorporated into her paintwork. 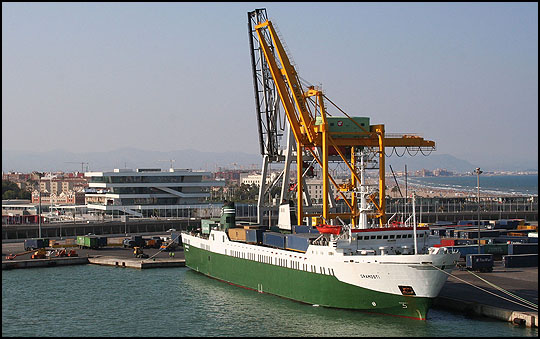 MV Gramosti is a RO-RO passenger and container ferry and we saw her in Valencia in August 2007. She was built in 1984 in Romania as the Paltinis. She spent from 1997-2005 as the Sammarina A after which she took on the name of Gramosti. She is listed on Shipspotting.com with a status of "Dead" and as far as I have been able to make out is currently for sale somewhere in Romania. 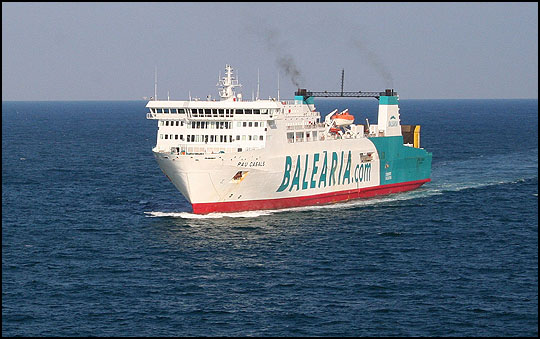 On the same day the Balearia ferry Pau Casals sailed into Valencia. She's had more names than I have dinners in a week... She was built for Cenargo International as Dawn Merchant in 1998 and has been Europax Appia, Pau Casals, AVE Luebeck, T Rex(!), Norman Trader, Stena Alegra and now operates for Stena as M/F Kaiarahi. As Pau Casals in 2008 she was involved in a scare when the bow door alarm sounded during rough seas whilst heading to Barcelona. The doors were closed but a locking pin had become disengaged. 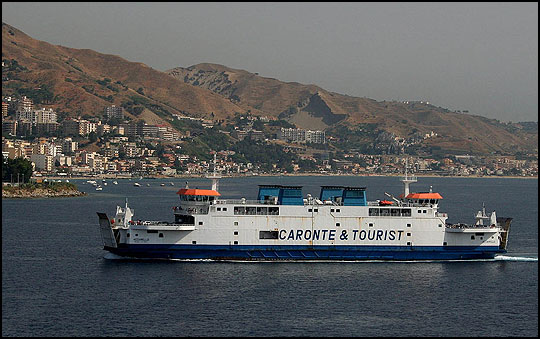 The Acciarello double-decked car ferry in the Straits of Messina, on 7 July 2008. Built in 1997 in the Netherlands as Prins (Prince) Johan Friso as one of a pair of ferries crossing the Western Scheldt - the estuary of the Scheldt river in the Zeeland province of south-western Netherlands. Prins Johan Friso operated until 2003 in the Netherlands at which point a tunnel was opened for traffic underneath the Western Scheldt and both the ferries were sold to an Italian company. Prins Johan Friso became Acciarello and operated between Messina on Sicily and Villa San Giovanni on the Italian mainland. 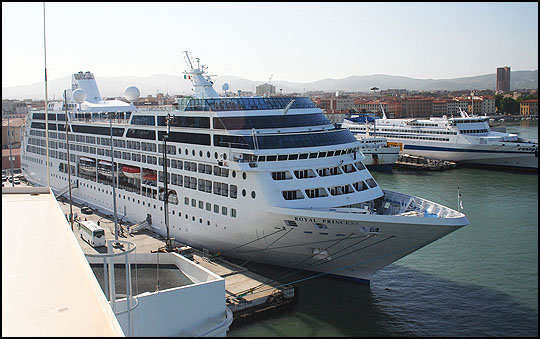 The Princess Cruise Line's Royal Princess in Livorno, Italy in July 2008. This was the second of three ships of that name to be operated by Princess Cruises, so if anyone is going "Huh???" right now, then this could be why! She was built in 2001 for Renaissance Cruises as the last of eight "R" Class ships and was named R Eight (see what they did there?) Renaissance went bankrupt in 2001 and the ship was laid up before joining Swan Hellenic as Minerva II. The company had named her after their previous ship: Minerva. She transferred to Princess Cruises in 2007, becoming the second of their ships to be named Royal Princess. She transferred to P&O in 2011 and was given her current name Adonia. In 2013 two of her passengers were shot during a robbery in Bridgetown, Barbados.

Just over one hundred years ago, this postcard was bought by a lady called Florence to send to her friend, Rose, who lived in Sowerby Bridge, Yorkshire. 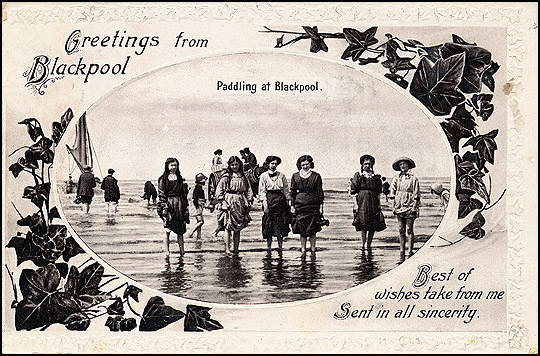 The postcard was postmarked at 4:00pm on 18 August 1913. It was published by The "Philco" Publishing Co. and is one of a style that was run through an embossing machine. A border of raised leaves surrounds a design with foliage to two corners, greeting and message in the other corners and an oval embossed depression with photograph. Entitled: Paddling at Blackpool, the photograph gives the impression that the photographer sent his dog to round up a few paddling females and told them to stand awkwardly whilst he took his photo. The young lady on the right liked the look of him so much she has hitched her skirt well above the knee in order to impress. Meanwhile, to her side, someone who has eaten a few too many whelks has unfortunately leaned into the photo as she returns them to the sea... "Dear Rose, Have arrived safely at about 8:45. It is a lovely day but it's rather hot. Am already sunburnt. We've been sitting on the sands this morning watching the tide come in. With love, Florence."

A Morning in Bolton

This week the feeling that we should do something with our one weekday when we don't have our Granddaughter became intense enough for us to pile into the car and trog off down the M61 to Bolton. 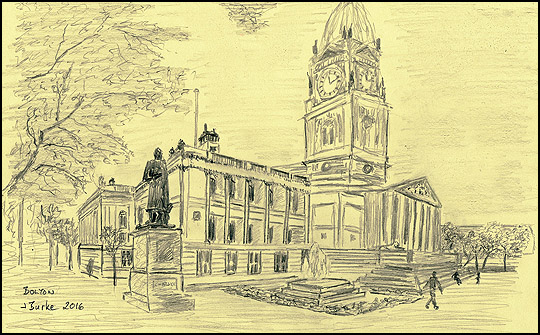 It's several years (decades) since we looked round Bolton's shops and market and I couldn't for the life of me remember where we used to park, but we followed signs for a car park and turned up behind a short queue of traffic along a narrow street, only to find ourselves waiting for our turn to turn round in the entrance to the now closed car park and re-trace our wheels a bit. Surely it can't be that hard to take signs down when a place closes, but evidence in almost every town suggests that it is in fact one of the most difficult things in the world...

Anyway we eventually parked in the multi-storey car park near the Victorian covered Market Hall. The entrance and exit involves a double helix spiral road affair which is quite exciting. The idea is to stop at the top and guess which direction you are facing compared with your entry to the ramp... Even better, this car park gives visitors 90 minutes free parking! Well done Bolton!

Our exit from the car park on foot led to the first floor of a shopping mall attached to the Market Hall. There were lifts but no apparent stairs to the ground floor (they are further along the mall) but a large Debenhams store was at the nearest end of the mall. We nipped in there and I fulfilled Miss Franny's expectations by rejecting all the shirts as either boring or tailor fit - which my body isn't... It's butcher's dog fit in case you are interested...

We utilised one of their escalators to descend from the first floor down to what is described as Floor 1 rather than Ground Floor so Miss Franny (who is wary of escalators at the best of times) insisted against my protestations that we go down to the Lower Ground Floor which would better be described as basement and we had the excitement of travelling both down and up an escalator to escape.

We had a latte in a Costa and I wondered for the millionth time why we are all so enamoured of extremely strong coffee that adds to corporate profit, sells far too big portions that we have now come to think of as normal and has led to the scarcity of small family-owned cafes where the owners actually smile and are pleased to see you, rather than minimum wage employees who see you as an interruption to their conversation. I still think the best coffee is a heaped teaspoon of Nescafe in a mug which is then filled with hot milk. It takes about 10 seconds to make. In all the mock Italian places a cup of coffee takes so long to make that at least two people have to be involved and despite their best efforts takes forever. My aunt still likes to have a coffee, visit two shops and then have another which was a common thing in the 1960s, but nowadays means that you have got through several buckets full after a couple of hours... Tiny Pyrex cups and saucers - and a price that doesn't empty your pocket in one fell swoop: that's the answer!

It's February and we didn't expect it to be warm outside, but Bolton is quite a pleasant town centre and the Town Hall is worth standing to look at for a few minutes. I had no camera and no, I had no sketch pad either. I did the above sketch from a photo found on the Internet this morning. HB pencil on A4 yellow paper.

In 1979 I bought myself a battered old Triumph 1300. After a couple of years of not having a car it was a cheap and cheerful if not exactly sparkling example of motoring heaven. 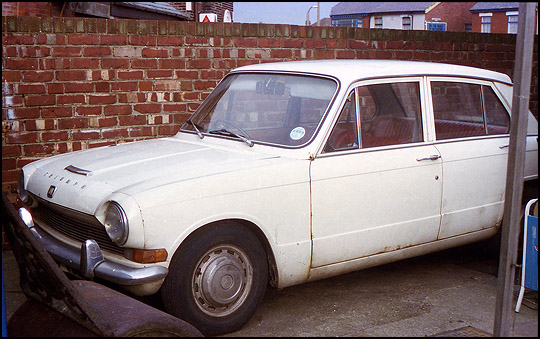 It had been registered in 1968 and so was 11 years old when I bought it. Although painted white, this had discoloured unevenly and was impossible to clean up - even with my old remedy from teenage days, a tub of Vim followed by re-polishing! A number of dents in the sides and the roof(!) suggested it had been rolled at some point or other... 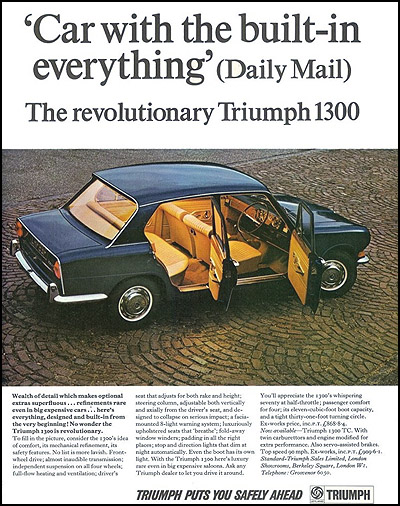 The car had been designed as the successor to the Triumph Herald and was originally produced as a front-wheel-drive car competing with its contemporary the Austin 1100. This didn't give it the same handling benefit as its rival however, which had a transverse engine like the same company's Mini. The Triumph had the engine mounted in the traditional front-rear orientation and it was mounted over the gearbox. In 1970 it was re-styled as a rear-wheel-drive and became the Triumph Toledo. 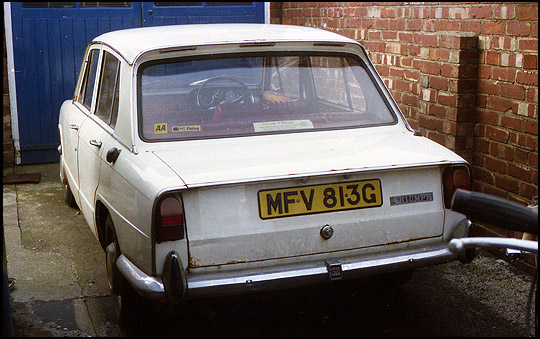 It was what I'd call a gentleman's car though, with a walnut wooden dashboard and wooden trim below the side windows. Changing gear required some care and was never a lightning-quick operation. The roof extended beyond the rear window a little and had three vents over the window which can be seen here. These provided through-flow air replacement by drawing air from the car interior to be replaced by air flowing in through the dashboard air-vents. 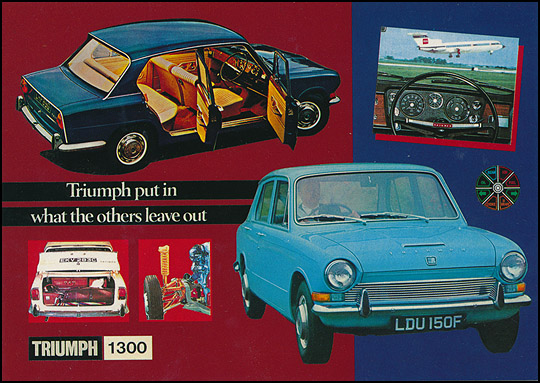 We had the Triumph for a couple of years and then in 1981 I sold it through the local car auctions. Not long afterwards the police came looking for me. The new owners had obviously not registered their side of the ownership change and it had been left blocking the entrance of the Imperial Hotel on Blackpool's Promenade - at the time of the Conservative Party Conference!

In those days of IRA bomb scares, the police told me it was in danger of being blown up in a controlled explosion. Sadly, they wouldn't give me a lift down to watch and in the event it must have been moved without being blown up anyway!