I know, I know... I have been sadly lax in publishing articles here for the last few months. Well lots of other stuff has been getting in the way. We moved house for one. So I'm now no longer a Blackpool resident but am living in a place called Poulton-le-Fylde just a couple of miles away from my old house. Miss Franny and I have spent several months stressing over it all (oh my God that is not over-egging the past few months in any way, shape or form!) But now we are here, 6 or so weeks in and having found (I hope) most of the things that needed fixing in the short term. 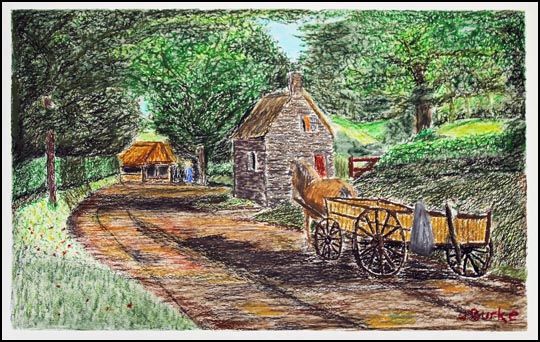 So with this belated catch-up entry I'm going back to look at various bits of art (you know... - my doodling!) that has been produced since I last mentioned it. You should have seen a few pencil sketches from holidays - and if not then I hope you're going to do some catching up of your own! Tsk! At one point I showed the old sepia postcard that I was considering doing a painting of. Not that long ago, not even two years - it was on the 11th April 2017 to be precise... Anyway, having never attempted to draw a horse before I cut the number of them down by a half and did this A2 size oil pastel over the ten days following that blog article. 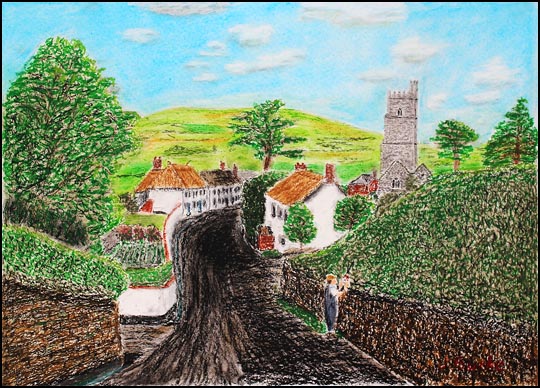 This was also from an old black and white postcard and is another A2 sized oil pastel. I overcame my usual nerves at adding figures and put a workman clipping the hedges on the right. I'm not the best at drawing humans but in this case he was actually an early 20th century robot in blue dungarees (how do you spell that???) so it was alright! 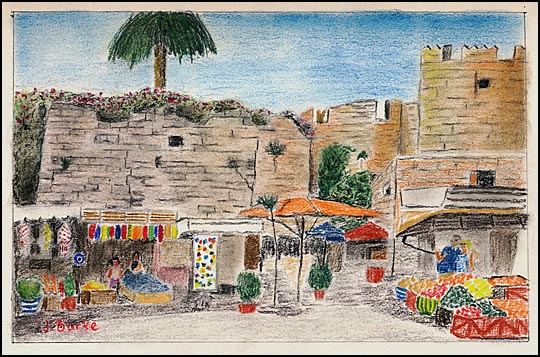 My uncle and aunt bought me an A4 spiral-bound sketchbook for Christmas in 2016 and this was my first sketch in it. For some reason I thought I'd start at the back instead of the front of the book thinking any finished works wouldn't get smudged by flipping the pages over. Totally never thought about how they might get moved as I did more art on pages resting on top of them... duh. This is a street market in Rhodes, Greece and is done with my best set of kids' pencil crayons. 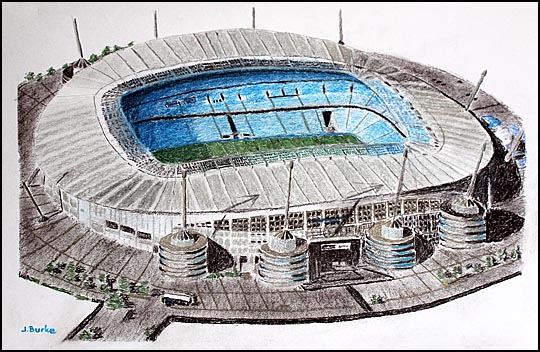 My mate David is not only mad enough to trust me to back up his singing but he watches football. Which is probably why he's a singer and not a musician as I spent all my Saturday afternoons from age 12 learning to play guitar and keyboards. After 50-odd years you'd think I'd have got the hang of it by now... Anyway he asked me to have a bash at the Etihad stadium of his team, Manchester something or other. A3 done in pastel pencils. 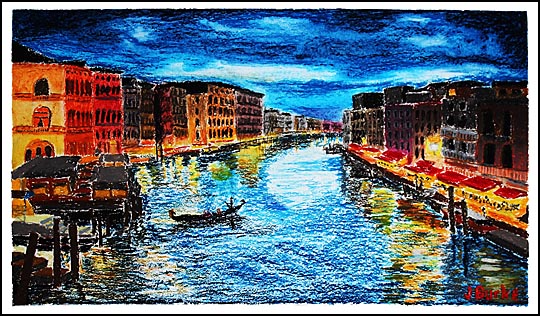 I found a photo of this Venice scene on the Internet and it prompted me to try an oil pastel of the Grand Canal at twilight. A2 in size, it's become a sort of favourite and now hangs in my dining room. A bit of a waste as we sit in the living room most nights watching Pointless as we eat our tea... 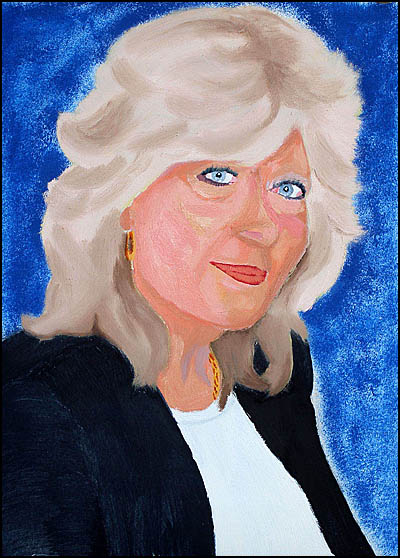 I was admiring some portraits painted by a friend and said how I'd never dare to have a go. He poo-poohed this and said I should try it so I dug out a photo I took of actress Ingrid Pitt in the late 1990s and set to with a set of oil paints given to me by my son-in-law. So my first portrait and my first real painting done with brushes and paint. I used a grid to get the likeness and there's a good four unsuccessful layers underneath this final layer, which I'm quite chuffed with. A2 size. I'm so sad that I was unable to show it to her as she passed on a few years ago, but she did have a pencil sketch I did of her which she was graciously enthusiastic about at the time. 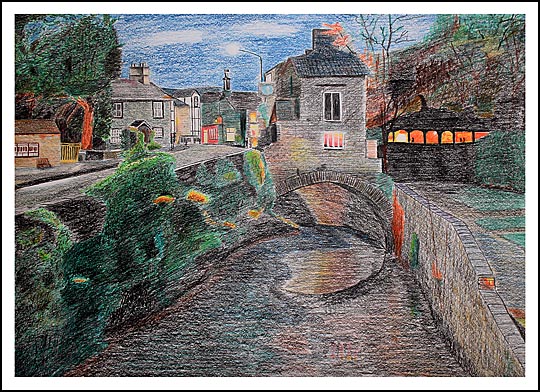 A bit closer to home, this is the Bridge House at Ambleside in the Lake District. Another night scene and done on A2 paper with pencil crayons. They are watercolour pencils but I couldn't screw up my courage enough to get this wet... 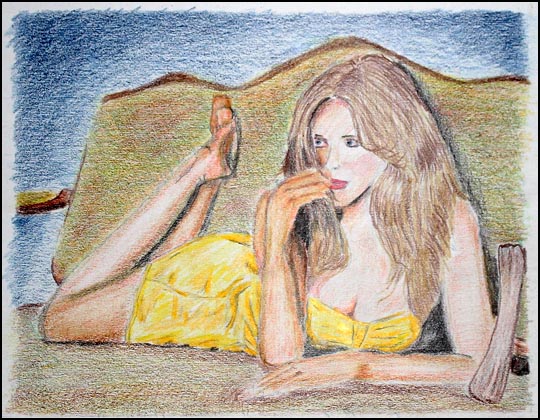 "Phew, I might take up art if I can have someone like this stretching over my settee..." said one of my FaceBook friends. No such luck for me though as this was done from a photo. Another pencil crayon sketch in the A4 sketchbook. If any young damsel would like to be sketched from life, my email address is to the left... (Right, now. Who changed that template???) 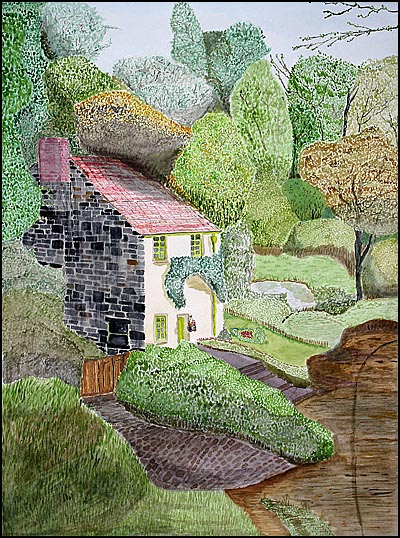 Ever looking for new challenges, this is a watercolour. I have another friend on FaceBook (yes two of them, who'd have thought...) who keeps posting scenes of picturesque... er... scenes... So this was done from one of those. The colours, lighting and some content were changed to protect the innocent. A2 on cartridge paper, which stretched and warped a bit from the watercolour. I've taken it to be framed and the chap in the shop was a bit worried. I don't like to be the only one with a challenge, now do I? 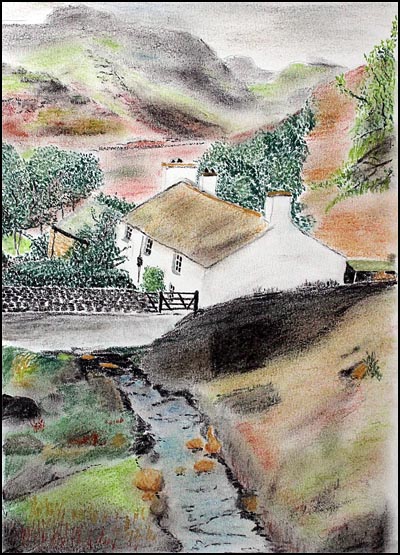 This was done in January this year to take my mind off the fact that the people buying our house had pratted about for so long that the house we wanted to buy ourselves had been put back up for sale. We did get it in the end and I'm sitting in it now but we had a few months where life was a sort of pressure cooker existence. This is another scenic scene from the afore mentioned friend on FaceBook and is another part of England's Lake District. Pastel pencils in the A4 sketchbook. 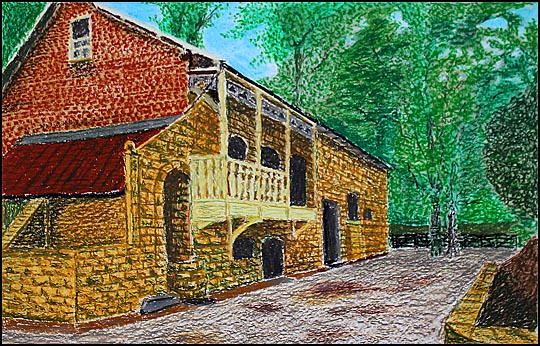 And bringing us up-to-date, this is my first artwork done in the new house. I went back to the sepia Edwardian postcards again for this view of the mill at Guy's Cliffe in Warwickshire. Oil pastels on A2 paper with (thankfully) no humans, horses or any other species waiting for me to mess up the picture by attempting them.

Return to Sketching and Artwork Index
Posted by John Burke at 21:42 No comments: