It was Tram Sunday today and we went along to Fleetwood quite early so as to be able to park at a reasonable distance and filled the time in before the day officially opened by having breakfast in the excellent family-run Ferry Cafe. We always expect Fleetwood to be busy on this day, but we also commented on how busy the water was. There were three people on jet skis, there were yachts and even a catamaran going out down the River Wyre into Morecambe Bay as well as several small boats and a medium-size boat on what I presumed might be a fishing trip. The Knott End ferry was busily crossing to and fro across the river. The weather was warm...ish... but it wasn't promising to behave. Although in the event it did and as I write at 8:20pm, the sun is "cracking the flags" as we Lancastrians are wont to say. This despite the fact that any pavements paved with flagstones are likely to turn back to earth overnight these days, the price of flagstones being what it is... 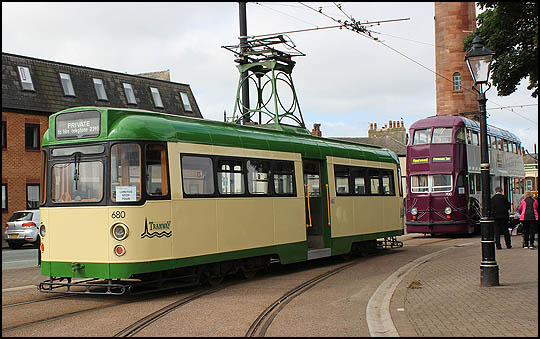 Despite the name "Tram Sunday", these days the trams are relegated to static displays only. The narrowing of the roads to "calm traffic" has left too little space to allow trams to try to share the road space with pedestrians in recent years. On display near the Pharos Lighthouse was my old friend, ex Twin-Car tractor unit 680. It spent many years acting as a stand-alone without its trailer and now looks refurbished and sparkling, if sadly lacking the old Progress logo on the side. Balloon tram 700 sits behind in the new tramway livery. 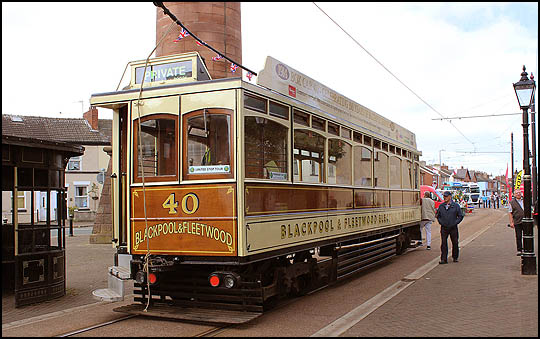 Parked on the other side of Balloon 700 was Fleetwood Box tramcar 40. It was built in 1914 for the Blackpool and Fleetwood Tramroad which since 1898 had operated from Fleetwood to the Gynn, Blackpool, where passengers could either travel up Dickson Road towards Blackpool North railway station, or get off and then get onto a Blackpool Corporation Tramways tramcar to continue their journey along the seafront. The Fleetwood and Blackpool Tramroad was bought out by Blackpool Corporation as from the beginning (the very beginning - 1st January) 1920. 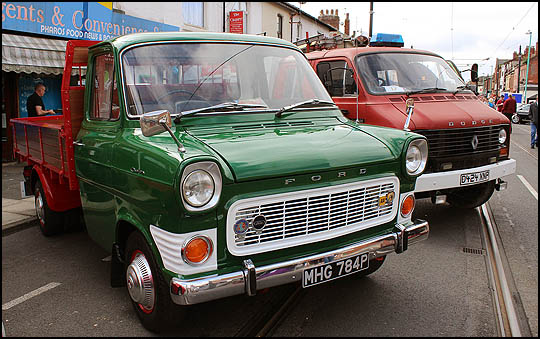 A side-effect of the pavement widening / road width reducing nonsense has been the drastically reduced amount of parking space available for vintage or classic cars on Tram Sunday. And, of course, yours and my cars on every other day... In the early days of this event there would be two long lines of cars, vans, lorries and buses all the way along Lord Street, but now they are dotted here and there and have become increasingly disappointing to someone who loves the days when you could tell the make and model of a car with a cursory glance. I'm sure they probably excite someone, but a line-up of American SUVs from 2002 do nothing for me. I would much rather look at a Ford Transit Mk.I. The Mk.I was introduced in 1965 and remained in production until a facelift in 1978 resulted in the Mk.II. This 1975/76 example has a drop-side pick-up configuration. 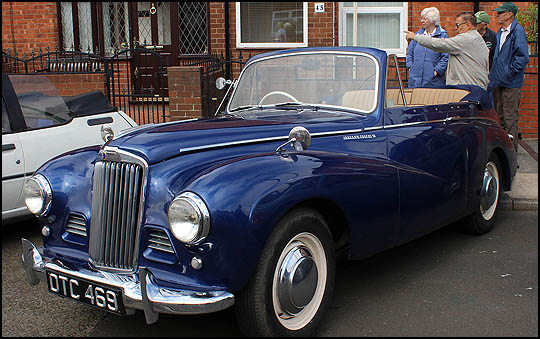 Sunbeam Talbot 90 Mk.II 2-door drophead coupe. Built from 1948 to 1954, this was the last Rootes model to bear the Talbot name. This particular car dates from 1952. 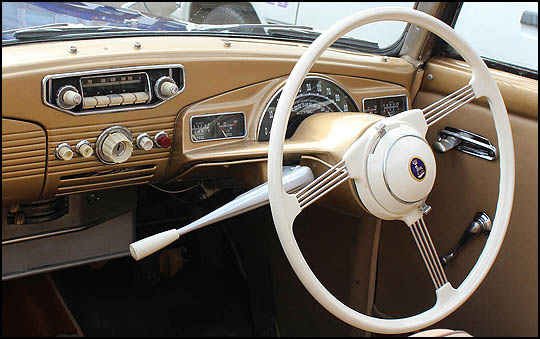 The same car. As with most other cars of the period, the ignition key goes in the dash and is probably just that. On or Off. The starter is probably the red button. You would turn the key and then press the button to start the engine. The surround to the keyhole has a pointer because it is the lights switch with three positions labelled Off, Side, Head. The switch for full beam will be where it still should be in modern cars if it weren't for idiot designers thinking people can steer and reach behind the steering wheel at the same time. It will be a small toggle button on the floor to the left of the clutch pedal. So easy to immediately dip your headlights no matter whether you were negotiating twisty moorland roads - there were no motorways in 1952. Column gear change too. I used to love those... 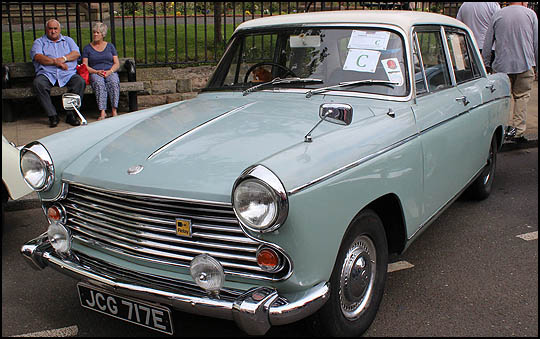 A 1967 Morris Oxford. Two-tone cars - weren't they just the biz...! My great-uncle had a similar car, a Wolseley I think. 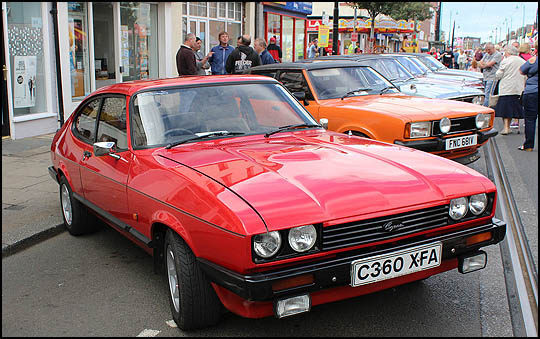 I had a couple of these one after the other, though they were company cars not my own. Not as posh as this either, mine were the basic 1600. This is the 1970s glam car - the Ford Capri. I remember one of mine had a problem with the driver's seat which wouldn't lock into place on the floor but shot forwards or backwards if I stopped or set off too quick... Hence the fact I managed to get a second one... 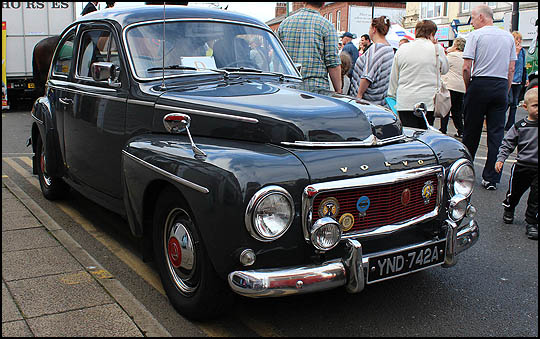 A 1963 Volvo PV544. The design was never going to win prizes. It looks like a 1930s car with the front cut off but the original bonnet retained and plonked on top of a more modern front grill and wings. It was long-lasting though, despite upgrades it remained in production for 18 years and towards the end of its production run Volvo placed tongue-in-cheek adverts asking the car's fans not to hate them! 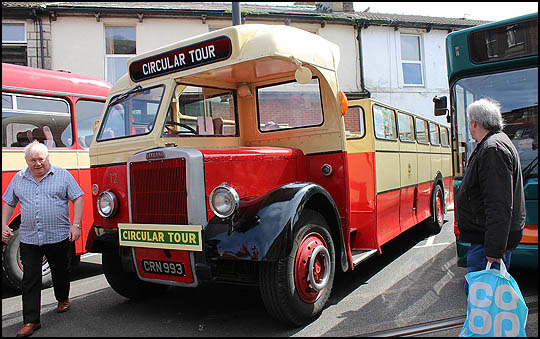 A Leyland half-cab open-top bus. Looking back twelve months to the last Tram Sunday, I see that this same bus was then identified as a Leyland Tiger PS2/5 with a Burlingham body, built in Blackpool, converted to open top use in Southport and rescued from dereliction in Rhyll. Elementary my dear Watson...

On Saturday night we were playing at the Thurlby Club in Lea, Preston. A tiny stage forced me to re-think our usual layout and I placed the keyboard at an angle to give myself enough room to stand. It worked very well as I felt there was less of a barrier between me and the audience. 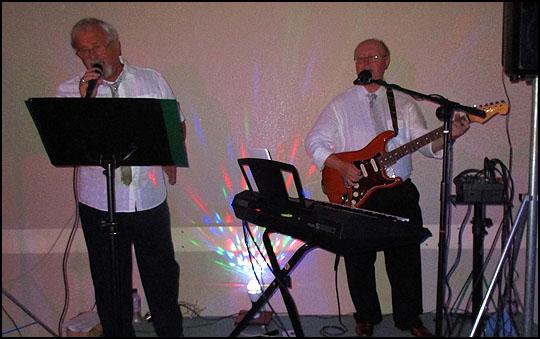 Usually I stand with the keyboard in front of me, the mic stand in front of that and then usually some floor-standing swivelling lights in front of that again. We were expecting a few games of Bingo, but in the event they played a Spanish game that they called "Cassie-Cassie" (Sp?) This had each player with a sheet of nine playing cards having three rows of three cards and the caller turned over a card from a second full deck. Like Bingo they played four corners, then a T shape with the cross bar either at the top or the bottom, two vertical rows and a full house. It was quite good fun and didn't take as long as Bingo with 90 balls to choose from. 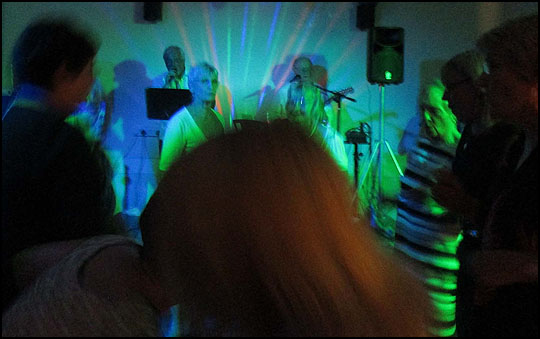 We played two sets mainly from our 60s song-list to an enthusiastic crowd of around 50-60 people and were told later that in the audience was a guitarist who used to play with The Ivy League who had apparently said "These lads are bloody good!". Thank you kind sir! Our first playing of the Elvis song Can't Help Falling In Love With You.

Saturday 14 May 2016. We played a memorial concert for a young lady, wife and mother who died tragically of cervical cancer. She was too young to be called for a routine test and by the time the cancer was found it was inoperable. 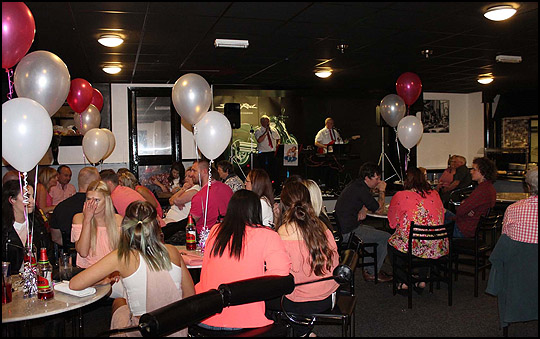 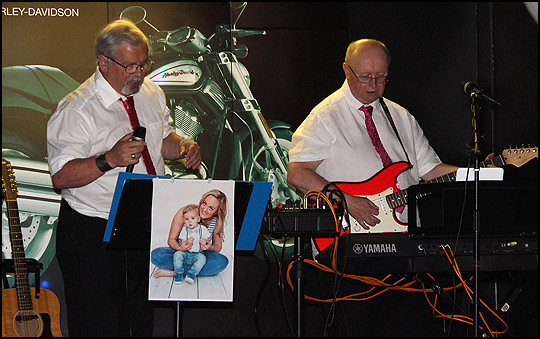 Saturday 4 June 2016. We found ourselves driving down twisting country lanes somewhere to the west of Eccleston in Lancashire. The Heskin Hall Steam Fair that we had played for years has moved from this year and we were heading for a farmer's field out in the country. 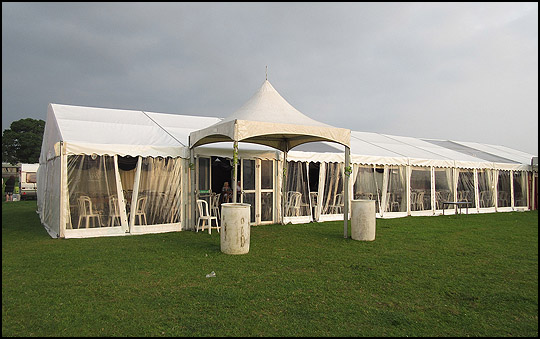 The event looked bigger than ever and with our long-time collaborator, Jack Gerrard at the helm, we knew that the facilities would be top notch. The marquee is always the size of a small palace and with a dance floor and twinkling LED lights set in the draperies over the stage area, it looks the biz, particularly once it goes dark. 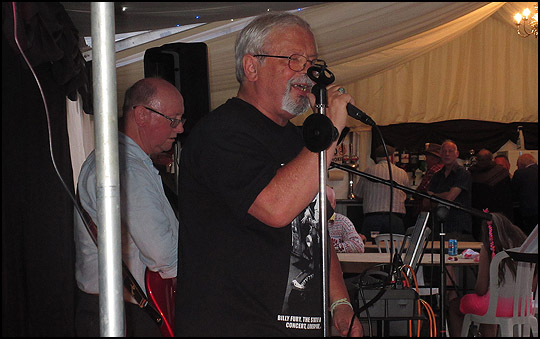 There's always been a good crowd in the marquee at this event and so it proved this year. Despite the new venue, we recognised lots of regular faces and we gained some great feedback and a couple of future gigs too! 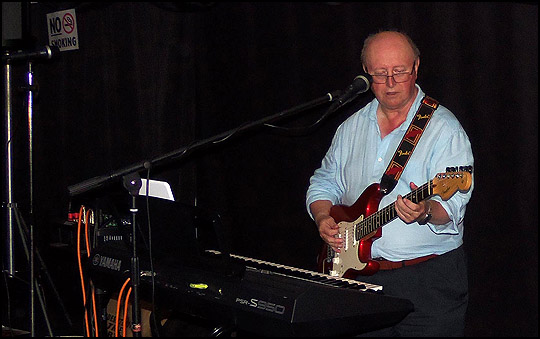 I even got to play a couple of instrumentals too - that'll teach him to "lubricate his throat" so much... 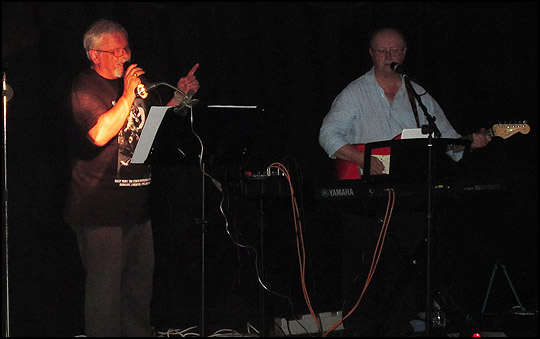 Sunday 12 June 2016. Everything was looking good for this year's open day at the land-based campus of agriculture college, Myerscough College. 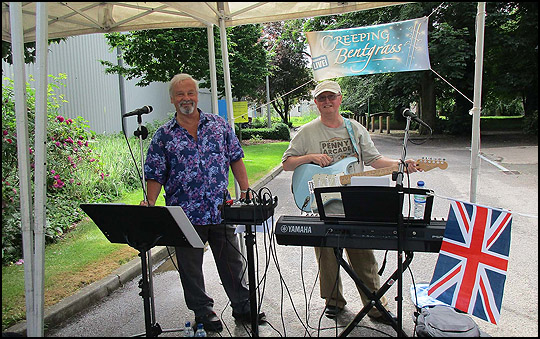 The weather started out fine and sunny, though the forecast was for rain around late afternoon. In the event though it arrived a bit before schedule and by 1:30 we had to admit defeat and move all the gear out of the wet. Our wet-weather alternative spot were showing the Euro football to a disinterested few and that was that. Hopefully we'll have a sunny day all day next time!

Monday 13 June 2016. We had been asked to play at the significant (must have been 21...) birthday party of the lovely Andrea who rules our favourite venue, Blackpool Coast Riders Diner & Bar, with a rod of iron. (That is what you asked me to put isn't it Andrea?) 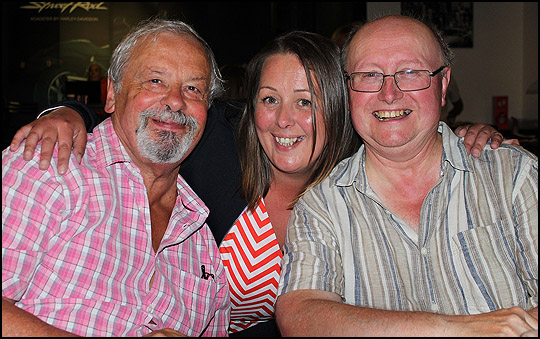 Here's the birthday girl with the two of us after our set. The venue has recently started a carvery project which we went to try out the other Sunday lunchtime - yummy! 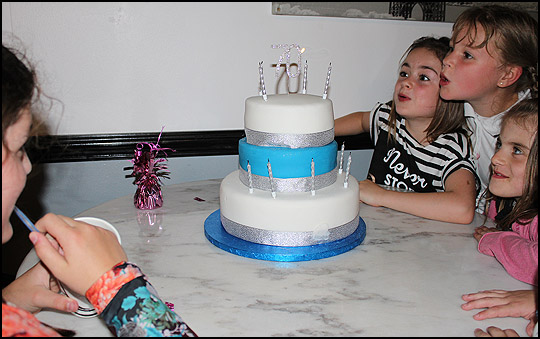 Not only was it Andrea's birthday celebration but someone else who had reached the age of 70. Obviously I cannot mention a lady's age, but added together they would have been 110... Hang on kids... Did you just blow those candles out...? 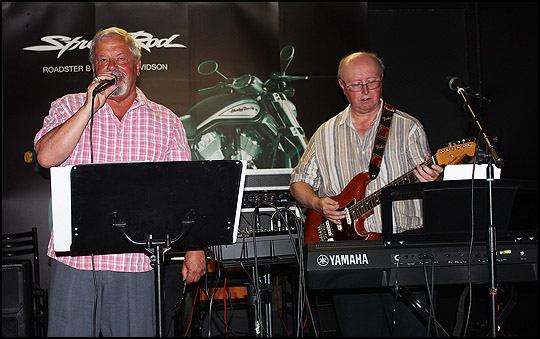 I'd brought out the ice blue guitar at Myerscough on the previous day, so tonight I gave the woody a chance to come out and rock and roll! A lovely looking guitar, but I still personally prefer the tone from the cherry red guitar. Everyone else says they can't tell the difference, so maybe it's just different, not necessarily better. Another great night at Coast Riders - and (why was I expecting this?) a couple of challenges for next time in the form of half-forgotten songs from way back!

Friday 24 June 2016. The Fylde Farm Weekend. We are once again in a marquee, this time in a field next to the M55 motorway in Treales. 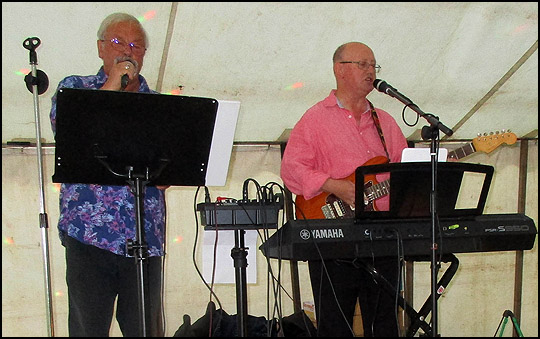 The weather had been a bit damp during the day, but it was fine and the field was firm enough as we drove in and made our way towards the back of the field where the beer tent was situated. 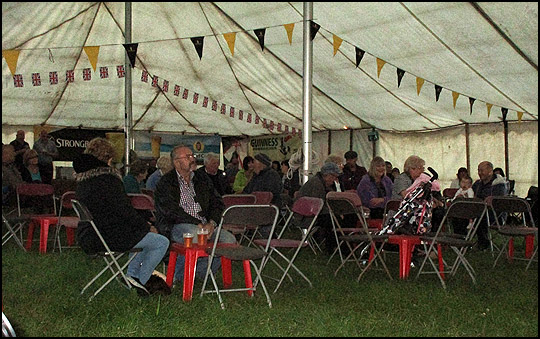 This is usually a quieter event for us than the Steam Fair, but there was a good-sized audience of between 70-80 people for most of the night and as usual there were some regulars and familiar faces to be spotted. 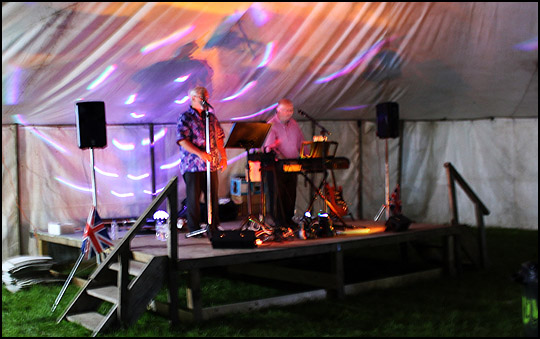 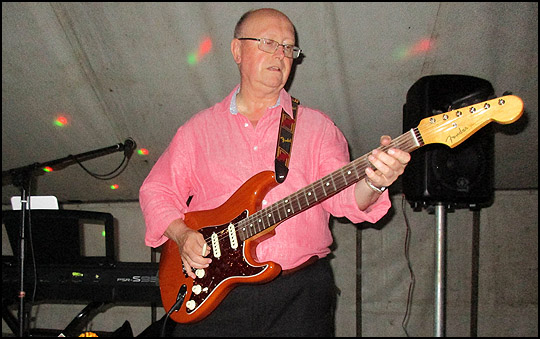 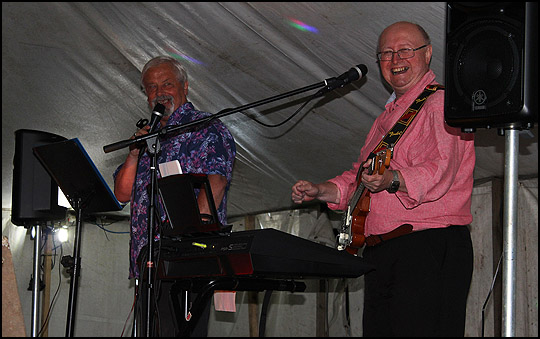 Another good night - favourite quote of the night: "We come here every year and always say you couldn't possibly get better - but you do!" Thank you kind sir and we hope your hearing improves soon!