Hobbies tend to go in circles - I'm scanning old photos again at the moment and in the middle of doing some negatives of a holiday we took in London way back in December 1995. Nineteen and a bit years ago! 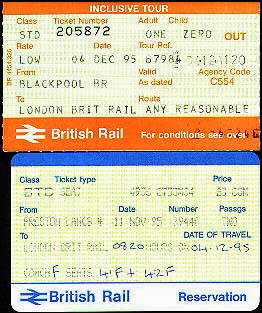 This was the first time we had stayed in London and the couple of day trips we had had previously can almost be discounted as we did little apart from faint at the cost of stuff. We were travelling by train (talking of fainting at cost of stuff...) and the holiday started to prove interesting even on the trip down.

We caught the 08:30 train from Preston to London on Monday 4 December. We had booked seats but at Crewe an old nun decided I was in her seat and was very ungracious when I saw on her ticket that she had caught the train an hour earlier than she should have done. She thought that the two of us should have moved for her anyway. She sat across the aisle and spent the journey muttering to herself much to the amusement of two young girls sitting opposite. Mind you, we all found it amusing when she locked herself in the loo and had to be freed by the guard... As she made her way (muttering) back down the train, an anonymous voice (but not unlike my own) murmured "Oh dear... what can the matter be..." 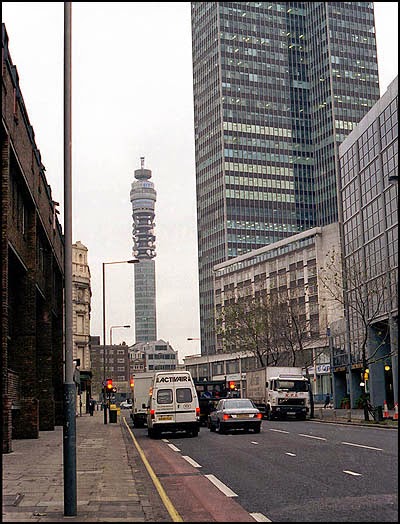 We got into London just before midday and booked in at the Kennedy Hotel nearby Euston Station. I think it became a Thistle hotel a few years later. On coming out of the hotel the first landmark to be seen was the Post Office Tower. London was dull and somewhat chilly. It was to become just downright freezing... 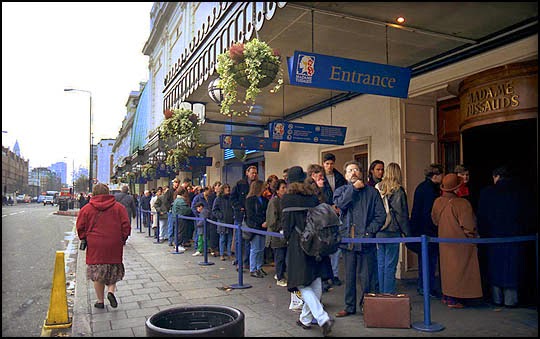 We had bought our tickets for Madame Tussaud's by post and were allowed to dodge the queue to go straight in. What a swiz when we realised the queue wasn't all that long anyway! I'm not going to post photos of anything that they are likely to still have on show but here's just a couple of tasters. 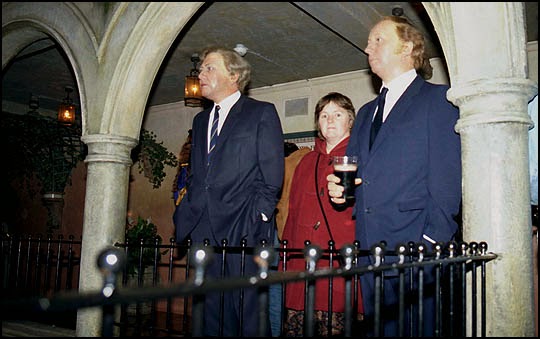 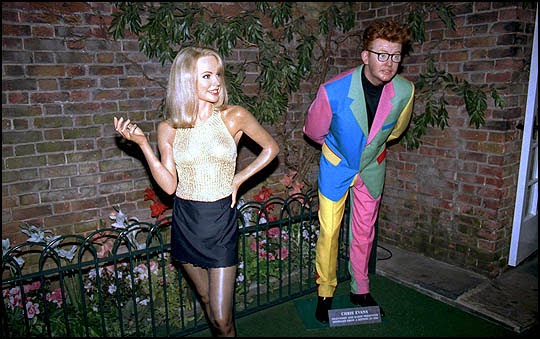 Not yet 30, Kylie Minogue was at this point still much loved for her appearances in Australian soap, Neighbours, as much for her singing. The iconic hot pants of Spinning Around were still five years in the future. Chris Evans looked as though he had been modelled in the act of stooping to speak to her and there is lots I could say but won't about the suit...!

We enjoyed the rooms with past and present royalty and the tour finished with a short ride through a sort of steam punk London, probably before the term "steam punk" came in to being(?) We came out into winter and decided to walk down to the West End shops. 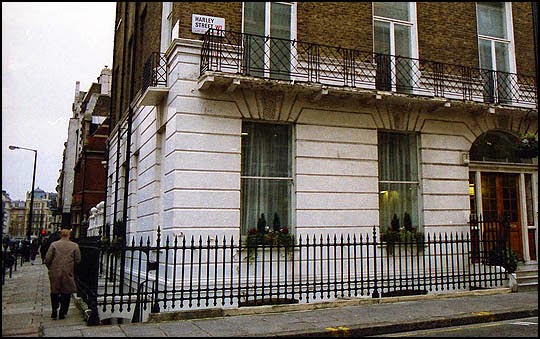 Our route took us through some uniform and rather unappealing streets though, behind some of these windows in Harley Street, people were making in that one afternoon more money than I would see in a year or three... 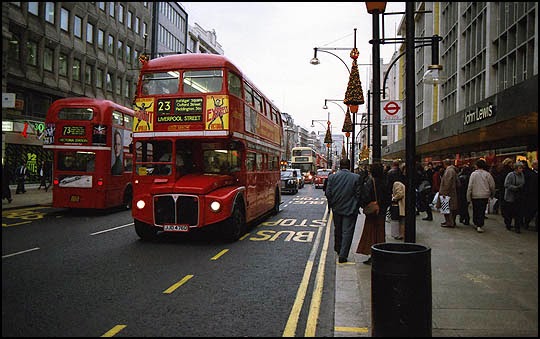 And so we reached Oxford Street. Routemaster buses were still to be seen in profusion, though equally in evidence were other more recent double decked buses. At least the horrendous far-too-long bendy buses had yet to infest the capital. 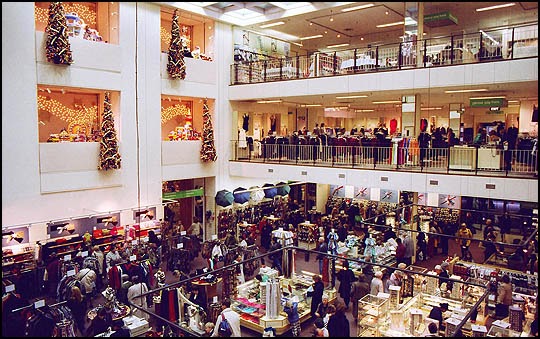 We had a look round a few of the larger shops, bright and seasonal with Christmas goods. This is John Lewis. Easily spotted, he is the one turning away from the camera behind the table on the top floor... 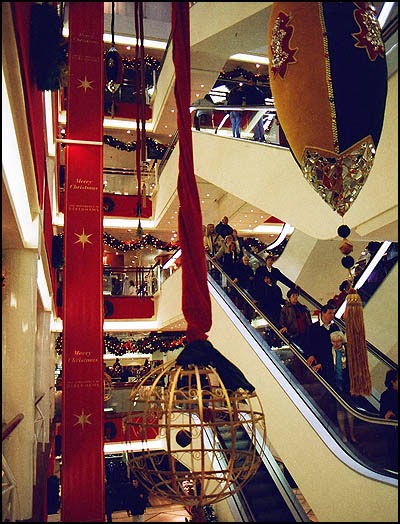 Coming down the escalators in Debenhams where some awesomely large Christmas baubles were hanging down the stairwell! 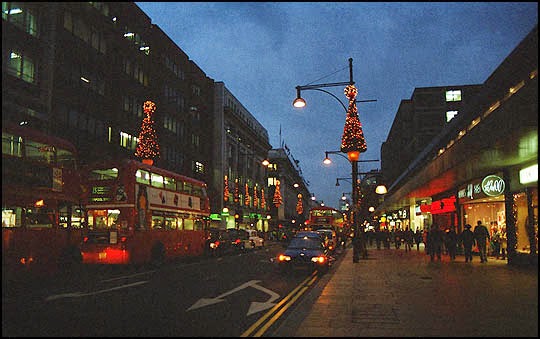 We walked the length of the street to Marble Arch and then came back down the other side of the street, starting to feel cold and a bit peckish as the sky got darker. The Christmas Lights came on and we decided to have a look at the posh end of the West End shops and find Bond Street. Which we shall, in the next entry, bumping into a rather well known face!

Return to London Weekend 1995 index page
Posted by John Burke at 11:07 No comments:

A Chilly Visit to York

Blimey! The 27th of January and not a single blog post until today in 2015! Sorry folks! Busy doing other things, but some of those things will form the basis for more entries over the next few days with a bit of luck.

Last Sunday saw our first proper outing of the year when we got into the car and set off across the Pennines to York. Notwithstanding the M62 being a mess of roadworks and speed restrictions, we arrived late morning and decided to go into the excellent York Castle Museum. 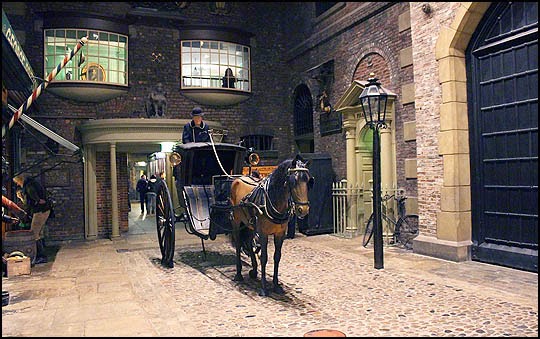 This is the famous museum with a street. Shop and other building fronts have been collected and set up in a street setting with the sound of horse hooves and displays of contemporary goods in shop windows. There are also a set of period rooms from the 1600s right up to the 1950s. The final room depicting the 50s bears an uncanny resemblance to my grandparents' living room from that time. I'm never really comfortable with publishing lots of photos from museums so will limit myself to the above and a couple of items that form a more temporary display of toys and childhood, both of which have personal memories for me. 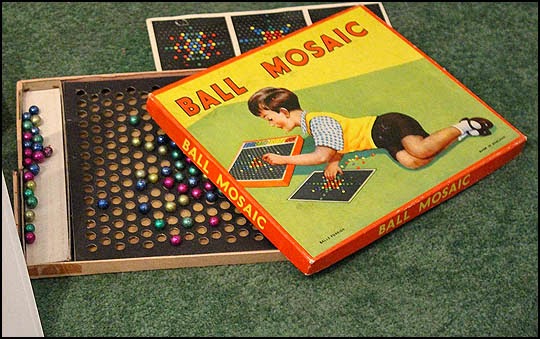 The first was this - a 1950s toy called Ball Mosaic which was as simple as they come. A perforated sheet of cardboard and a small collection of shiny coloured balls that sit on the holes and can be arranged to form patterns or pictures. A sheet of paper shows a few samples to give ideas. And then the child is only limited by his or her (or parents') imagination! 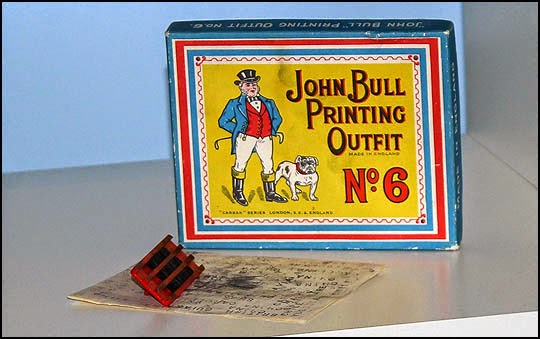 The second item is a John Bull No.6 Printing Outfit. These comprised of a couple of wooden (later red plastic as shown) holders into which you fitted small rubber stamps, each of which was of a letter of the alphabet or a number in reverse. A pair of tweezers was provided to pick up the letters but invariably you would try to pick up a row or a word and squeeze the tweezers too hard, catapulting letters all over the place. Once you had spelt out your message with the letters, you stamped the face of the letters on an ink pad and then on a piece of paper to print your message.

This was a great hit with all little boys who liked to get messy and, I'm sure, a disaster for all mummies of the time who would unwrap this present for her offspring and happily anticipate ink blots all over her carpets, tablecloths and furniture... Luckily the letters soon got lost and the toy thrown away! 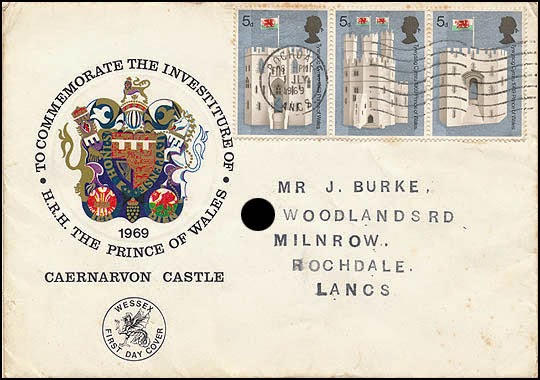 In 1969 I used the remnants of my John Bull Printing Outfit to print envelopes for first day covers of the stamps commemorating Prince Charles' investiture as Prince of Wales. 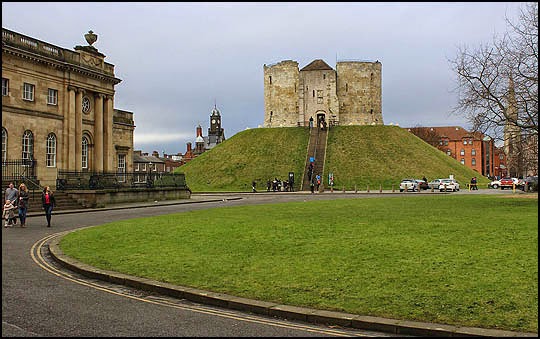 We came out of the museum to a dull and cold day and this view of Clifford's Tower, the keep, and only surviving building of William the Conqueror's castle apart from some curtain wall which also forms the town walls. The mound, or motte, never fails to impress me and the castle has seen some horrendous events in its past. Here in 1190 some of York's Jewish community including wives and families barricaded themselves from rioters in the tower. With either forced conversion to Christianity or, more likely, death at the hands of the mob staring them in the face the men killed their families and set fire to the tower, committing suicide. Those who escaped the flames were indeed killed by the rioters, many of whom owed money to the money-lending Jewish society. Following the massacre, the rioters broke into the Minster and burned the records of their debts.

Here also in 1537 on the orders of King Henry VIII, the leader of the Pilgrimage of Faith, Robert Aske, was executed slowly and cruelly by being hung, festooned in chains from the walls. Without a noose, with no drawing and quartering of his body, he remained alive in his chains until he died of exposure and thirst, this taking days of agony. The good old days eh...? 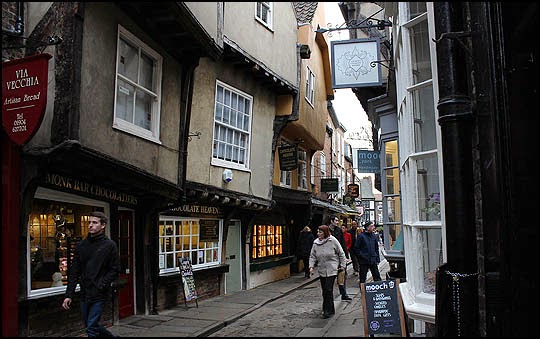 We had a leisurely lunch in Gert & Henry's, a 16th Century building near the Shambles (shown). Some American girls came down to pay at the counter which was near our table. "How is it still here?" asked one on being told the age of the building. "It was built well..." replied the owner. A biker couple in their late twenties came in for lunch, she being in leathers so tight and well-fitting, that the mere sight warmed me up far more than the excellent food! 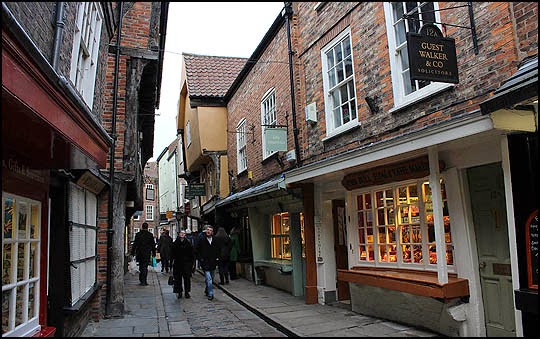 The Shambles is a fascinating street to wander down. It contains some very old buildings with overhanging upper storeys that come so close to each other at the top that it would be almost possible to shake hands across the street. 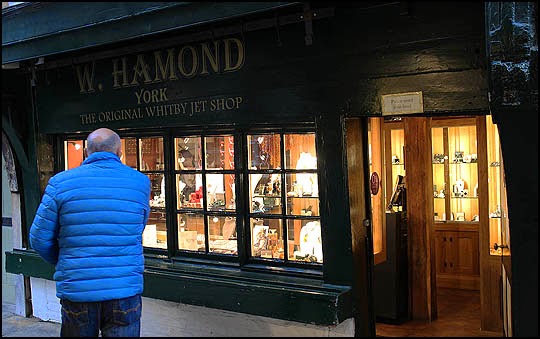 Windows have tiny panes of glass in sturdy frames and street lighting is noticeable by its absence. In fact the only downside is that the street attracts lots of people! But if you go there yourself, you can hardly complain at that...! 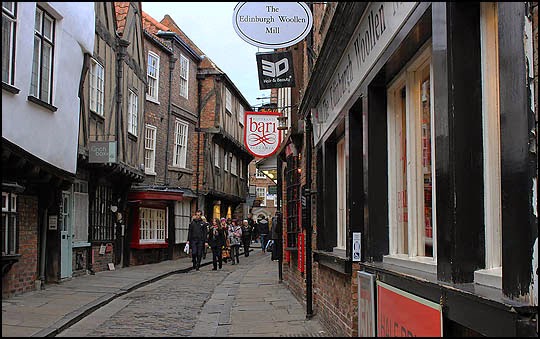 We walked the full length of the short street and back again. Then a slightly rash decision to walk through the shopping centre on our way back to the car park. 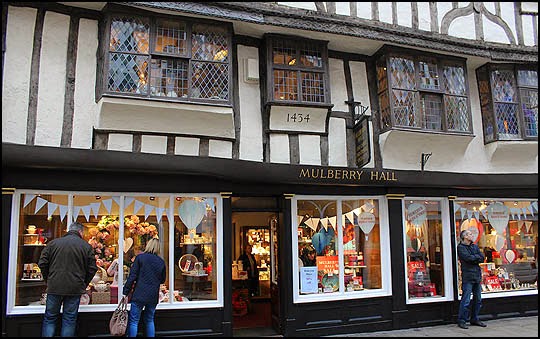 Walking down Stoneygate we pass Mulberry Hall, another ancient building from 1434.