A Hot Morning in Corfu

Friday, 28 August 2009. The ship returns to Corfu and we must prepare to return to the UK. However, our flight is a late one. We are not due to leave the ship until 7:30pm and so we go out to walk into Corfu. 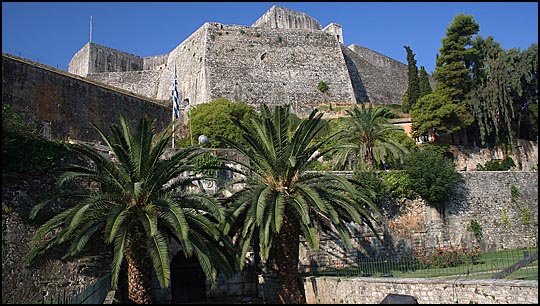 It is first thing in the morning and yet the temperature is soaring way into the 90s. By the time we reach the old - sorry make that the New - Fortress, we are hot, a little footsore and wanting a drink. We walked past and then up the side of the fortress. It was built between 1572 and 1645 by the Venetians, with further work done to the defences by both the British and the French. Above the gate that is behind the palm trees there was a carving of a winged lion that I found later to be the emblem of St Mark. In fact it's official name is the Fortress of St Mark, but everyone calls it the New Fortress because there is an older one that we saw on a previous cruise. 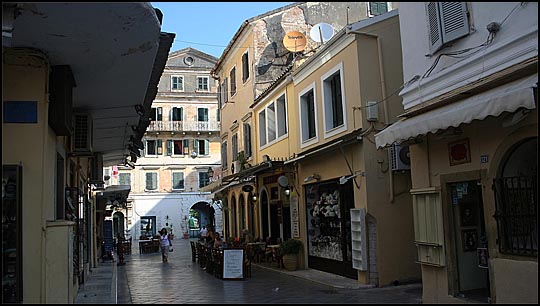 We reach the Old Town, a place of narrow streets, marble paving underfoot and full of character. Arcaded walkways shelter you from the sun and provide some cool against the glare and heat of the sun. We walk past a large pile of boxes on the pavement. A van has made a delivery to a shop and unloaded quickly and moved off. On roads of this width even one parked car means the road is blocked until it moves. 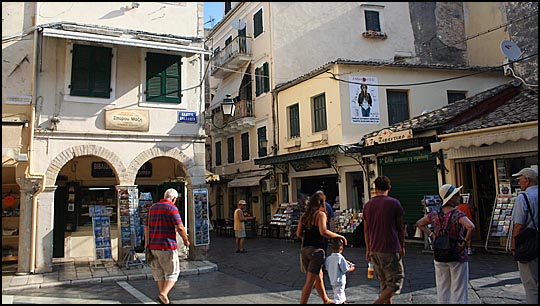 It's too early for there to be many tourists about. Almost everyone we see is a local, hurrying to get their shopping done before the heat of the day becomes too unbearable. 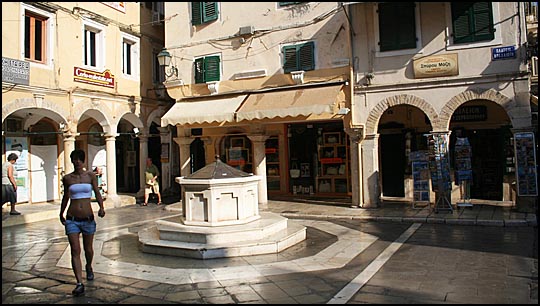 The old town of Corfu has some interesting corners - or perhaps I should say curves... Those shorts are miraculously defying gravity! The Old Town is full of little squares like this - if not all so splendidly adorned by near-naked maidens... In the centre is an old covered well. 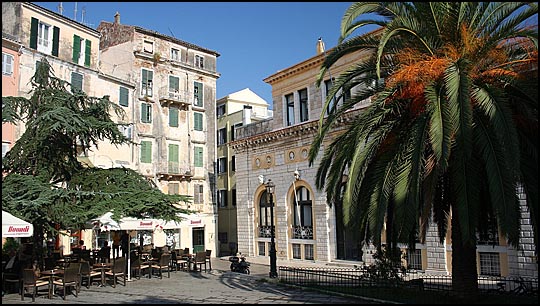 A larger square gave us a chance to rest our legs and admire the scenery. From here we retraced our steps until we hit the edge of the more modern town where we sat on a corner and ordered drinks at a street cafe. Two other passengers, Robert and his grandson Ryan came past and joined us for a while. Having had our rest we walked slowly back to the ship, my shirt almost entirely darkened by sweat as the temperature was now over 100 degrees. Our cases had been taken from the cabin late the night before, ready for going to the airport so there was nothing we could do about getting changed. But once back into the air conditioning onboard we started to cool down and feel better. 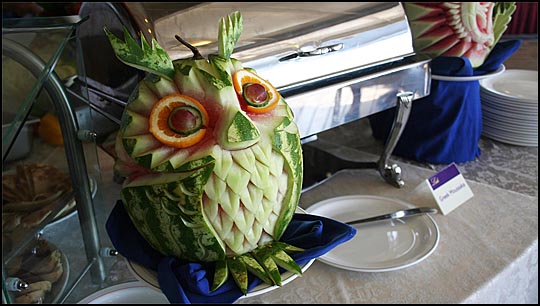 We had lunch and then wandered the ship for a last look round before heading for our usual refuge in the Horizon bar. I read for most of the afternoon - finishing the book that I had meant to read on the flight home... Then the usual wait at the airport, enlivened for a moment as I walked through a cloud of what I thought was smoke, as I was walking behind a lady and her son. She dropped her "ciggy" in a bin and there was a shout of laughter from her family. She had been spraying deodorant to cool herself and then realised she shouldn't have still had it, having already passed through security! Christopher Biggins was waiting to fly back home and was incredibly patient with the queue of people who lined up for an autograph. No one asked for mine... Homeward bound!

Pearls of The Aegean Cruise Index
Posted by John Burke at 09:26