It's been a busy few days and not only have I not been posting here but regular visitors will know even the Flickr account has been a bit quiet!

So I'm delving into the past here going back 28 years or so which is a little frightening because that only takes us back to 1981 - sheesh, I'm in danger of becoming a Crumbly!!! 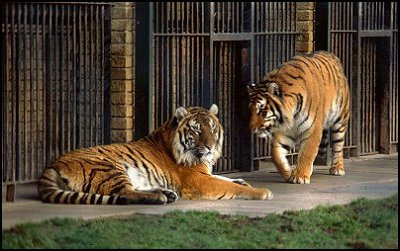 I used to take a lot of black and white photos back then as I was freelancing to magazines quite a lot. However I did take a few colours as well - on a variety of film stock! I used to use Ektachrome 64 a lot for colour slides as I used to process the film myself with some rather nasty chemicals and a bath full of hot water to keep them at the right temperature! It was a finicky business, but I'd been processing my own black and whites for years and wanted to have a bash at colour too.

Blackpool Zoo had a couple of tigers at that point and they are seen above making the most of the sunshine! 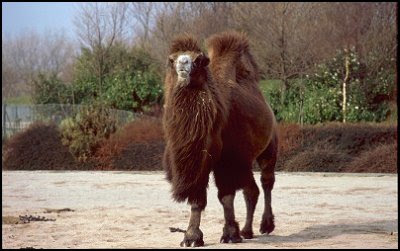 The camels had a spot near the entrance - as the entrance to the zoo at that time was along the path past the elephant enclosure. The elephants in those days shared the outside enclosure with giraffes and rhinos. Indoors were three different pens and only one species was allowed out at any one time of course!

All these photos are from colour slides, but when it came to colour print film I experimented with all sorts of stuff! Technicolor, Kodak, Agfa, Barfen (which I bought in 100ft rolls and loaded 35mm cassettes myself), Sakura, and loads of other weird names produced film that I tried out. Some of them were really grainy, lots of them have now discoloured making scanning the negatives a nightmare! 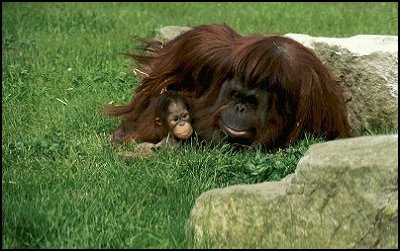 Azimat was the name of the zoo's most popular orangutan at that time. She had her little baby, Victoria, in the very early 1980s and I was there to celebrate! Azimat gave me a set of pictures that I had published in She magazine and the American National Enquirer and so was a favourite of mine!

Sadly she is no longer with us but Vicky is still at Blackpool and is now the matriarch of the orangutans at the zoo.

Kumba was the star of the gorilla pen and was the male silverback gorilla with the haughty stare and a disquieting way of handling his own droppings as though considering lobbing them over the wall at you...

Lomie, one of his female companions was another favourite of mine. She and Azimat both got used to me, I used to visit that often and they would be quite unperturbed at me pointing a "long tom" at them. I had a 400mm lens that was around a foot long on the front of my camera!

Who would have thought then that not only would miniature cameras be able to zoom into such faraway details but that film would not be necessary and that you would be able to take photographs on a telephone that you could carry in your pocket!!!

What a strange place the world seems now if looked at from the perspective of 30 years ago!
Posted by John Burke at 21:10