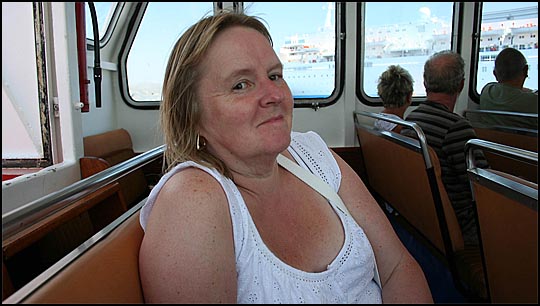 Samos, like Thira, is also a tender port - by which I mean that there is not a harbour large enough to take a large cruise ship so Thomson Celebration anchors off the shore and we transfer into their tender boats for a short ride much closer to the water than we get onboard the ship! 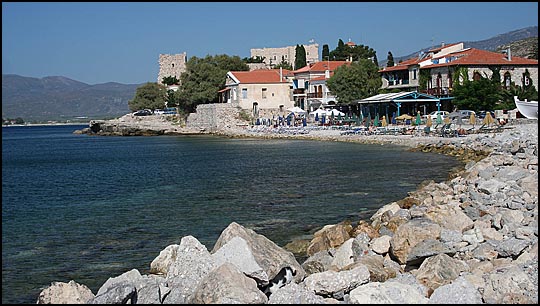 As we climbed out of the tender boat we could see a fortress on the hill in front of us and decided to walk up to it. We went up the hill to a dead end that delivered us to someone's front door and we swerved to the right and then up a bit more only to find we had gone past the fort and landed at a church on top of the hill. 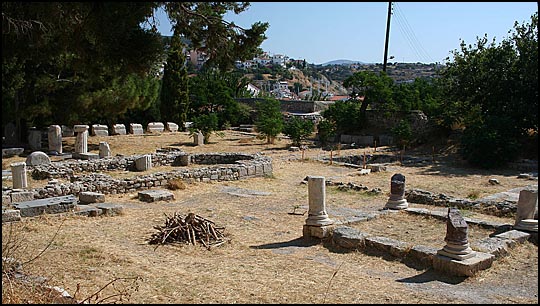 The church had the ruins of a far older basilica on the land adjacent and we had a look at that for a while and then went for a look at the Greek church with it's garden full of orange flowers. 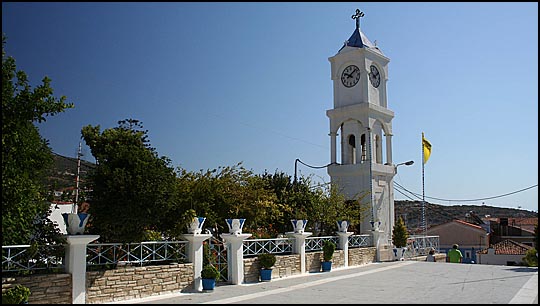 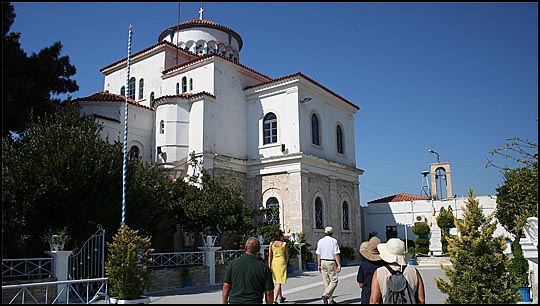 The church was open to visitors, but it was such a nice day that we opted to stay outside and we made our way inland to find ourselves on a busy main street. 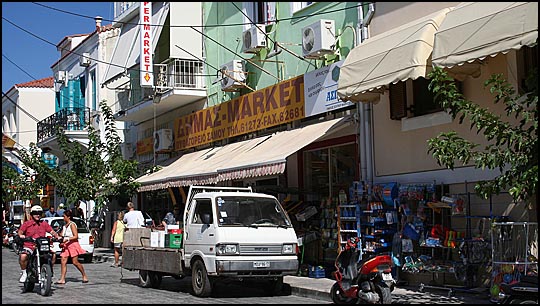 I enjoyed the bustle of locals doing their shopping or standing on corners to people watch - I suspect they were watching us actually as I must confess there were a few sights amongst our fellow passengers, as there are in any large group! 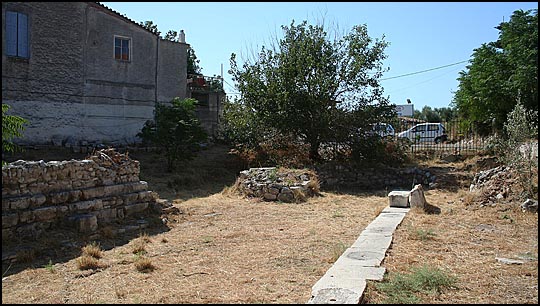 At the top of this street was another ruin - a temple to the goddess Diane, the Roman name for Artemis. However this had at the most a couple of stones and it was the equivalent of knocking your garden shed down and erecting a sign saying "the site of"... A bit like New Brighton did with their open air baths actually... Several decades later there is still a big empty oblong sunken patch on the grass with a sign next to it! 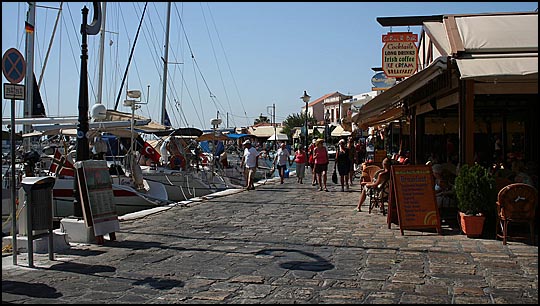 We walked back down the hill to the harbour and then walked along its length. Two young children were begging, a boy of around six, sitting cross legged in the baking heat, playing a tiny bazouki stringed instrument. He was getting a tune from it too. A girl of at the most three years old with a small accordian around her shoulders that she squeezed in and out, looking lost and obviously not wanting to be there. Heart rending, but then you see the mother, sitting in the shade, smoking and reading magazines, taking money from the kids whenever they had enough to give her and sending them back, scolding the little girl who wanted some shade... You can feel sorry for the kids but it's not them that end up with any money you give. 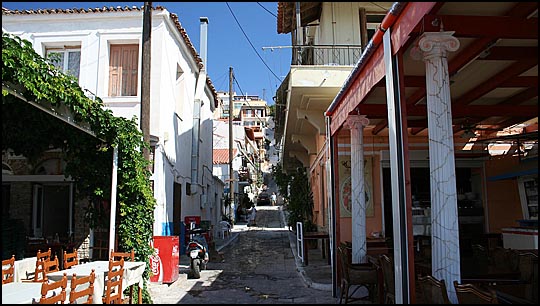 You can get some idea of the steep slope behind the harbour from this shot where the steps keep going up and up way up to the roof height of the yellow building in the distance. 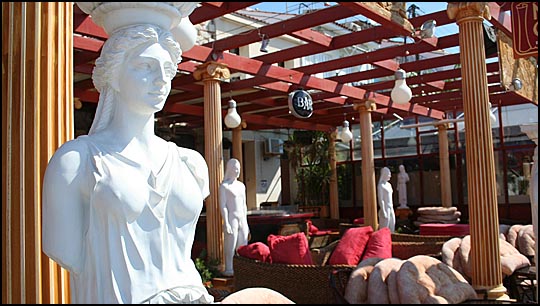 Some of the bars had spent a lot of thought on their theming! 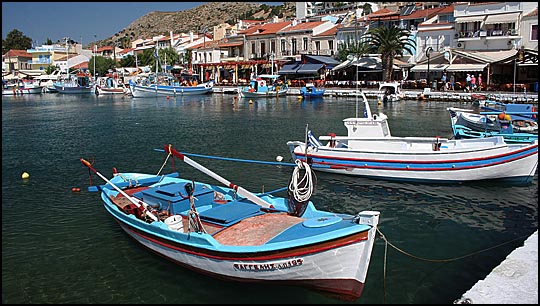 The harbour was bright with small boats painted in reds and blues. It would have made a good watercolour and I did doodle a bit in a small pad of watercolour paper that my daughter, Gill, had bought for me. I find boats quite difficult to do though, so I gave up on that one! 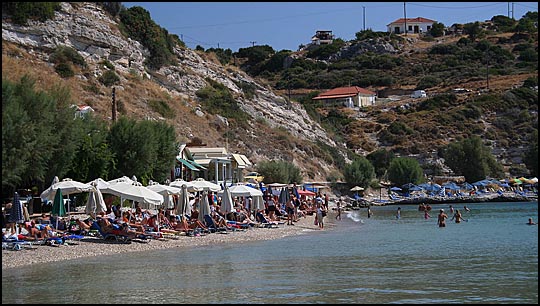 On the other side of the far harbour wall was a crowded beach, people swimming and laughing, unaware of the tragic little drama being enacted on the harbour wall. We walked back along towards the point where the tender boat would pick us up, but I wanted to sketch the view of the castle first. 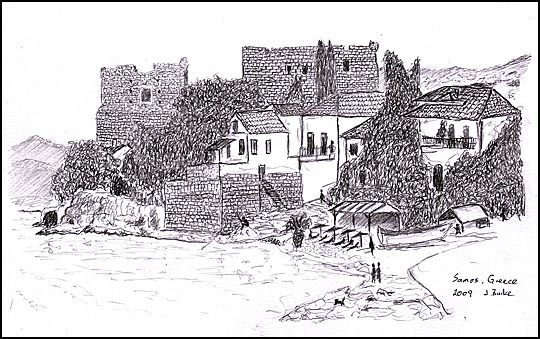 I spent half an hour capturing the outline and some of the detail and we went for a drink in one of the cafe/bars before heading back to the ship. I finished the sketch later in the Horizon bar, adding all the stonework and roof tiling detail and scribble hatching the trees and shrubs. 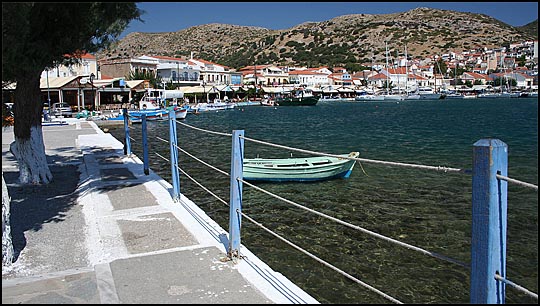 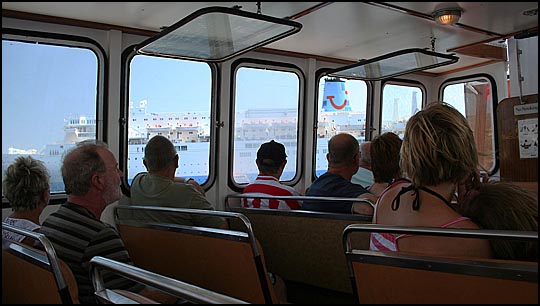 We were wondering again about tomorrow. We had heard Athens was affected by fires. However the captain had good news - we would be going tomorrow.

Pearls of The Aegean Cruise Index
Posted by John Burke at 09:46