Monday, 24 August 2009. We had left the House of the Virgin Mary behind and travelled to a crowded coach park on the edge of the ancient city of Ephesus. 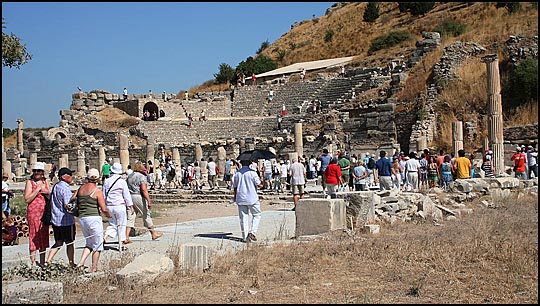 The city was reputedly founded by the female warrior sect, the Amazons. There were people living here as far back as 6000BC. It became a centre of the Ionians, sided with Greeks and Spartans against Persia, was ruled by Alexander the Great and later by the Romans under Constantine. We are impressed as soon as we enter the city, but the route that tourists take has been cunningly laid out so that it just keeps getting better and better. 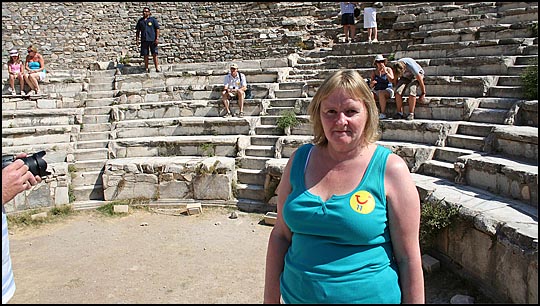 As we enter the site we see the Odeion or Small Theatre which was built around 150 BC. It seated around 1400 people and was used both as council chamber and as a theatre. It was originally roofed - there are no gutters to take rainwater from the stage area. We spent a few minutes exploring it, even though Ghengis,our guide, had told us not to get too excited about this as there was a larger theatre to come later. 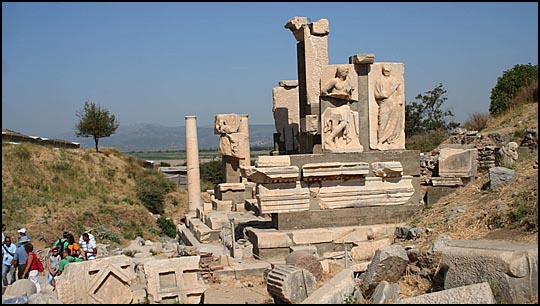 The Pollio Fountain. A major statue resides in a museum and the statues grouped here were brought following the collapse of an adjoining building. According to an inscription, the fountain was constructed by Sextilius Pollia in 97 AD. 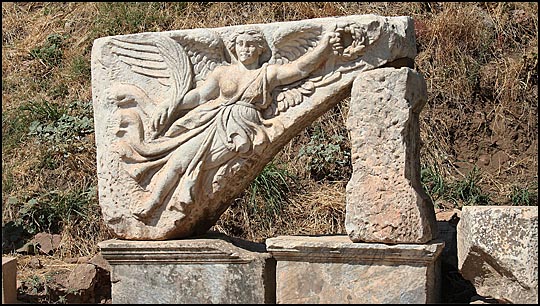 One of a pair of flying representations of the goddess Nike that adorned the Gate of Heracles which gave access to Curetes Street. 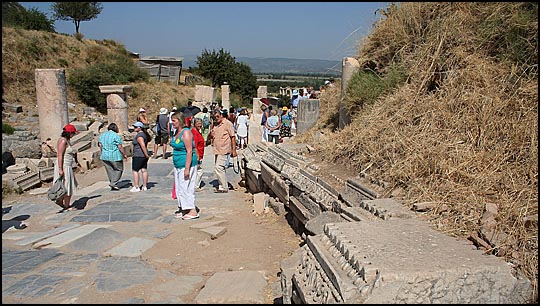 According to mythology, the Curetes were semi-deities who clashed their weapons while Zeus's mistress Leto gave birth to the twins Artemis and Apollo, so that Zeus's jealous wife Hera would be confused and not see the birth. (They led complicated lives, the Greek gods - but they were easily distracted...) 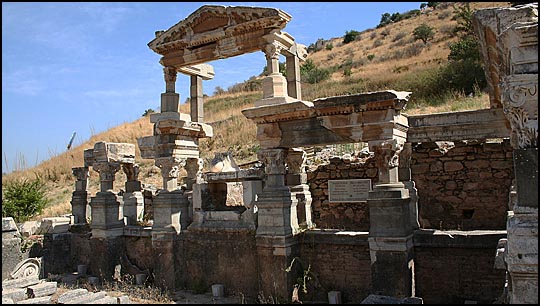 The Trajan fountain. The fountain was erected between 102 and 104 A.D. and as the attached inscription reads, was consecrated to the Emperor Trajan. This is a "reduced" reconstruction as originally the pediment was set 12 metres high. Most of the statuary from here was so fine it is now in the museum. 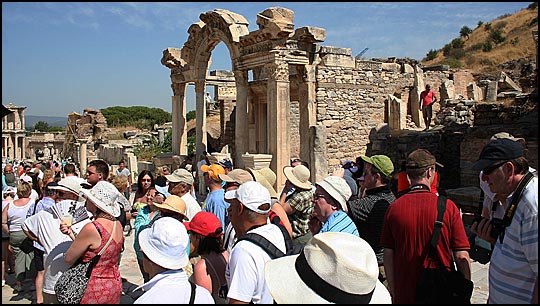 The Temple of Hadrian on Curetes Street. Here we see the front of a porch - the main building was set back and we shall see an arched pediment on that presently. 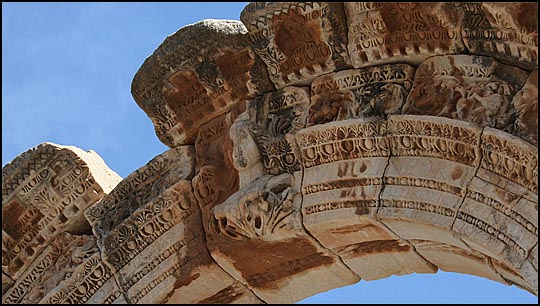 On the front of the porch in the centre of the arch is a bust of Tyche, the goddess of the city. 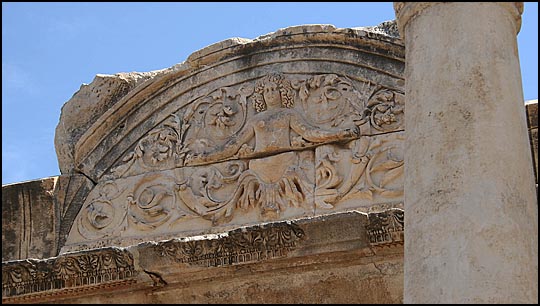 On the arched pediment of the temple itself is what was described as a Medusa. It doesn't look like a Medusa it looks more like a youth with curly hair and on a subsequent visit this was described as a representation of Hadrian's male lover. History can sometimes change as our understanding of events and knowledge becomes clearer or better supported from new archaeological finds. 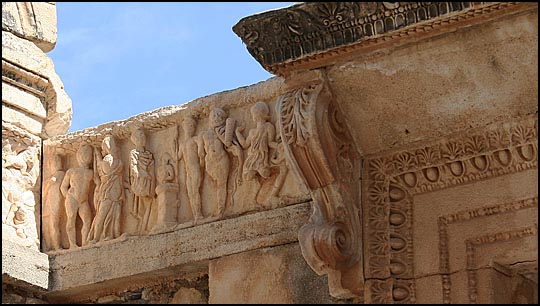 There are some well preserved fragments of carving here. This row of figures was carved before the year 138, though what we see here is a cast of the original which is in the nearby museum. 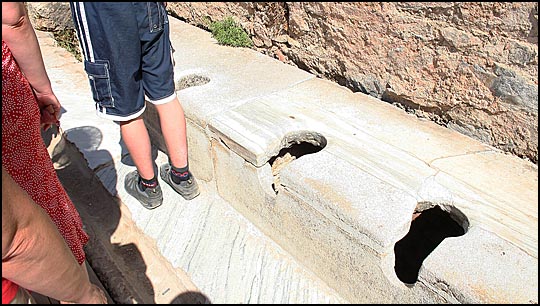 The latrina built in the first century AD are the public toilets of Ephesus. The toilets were ranged side by side with no partition between them. In the middle was a square pool. The floor was paved with mosaics. A sponge on a stick was the Roman's version of toilet paper. It would be cleaned and rinsed in the gutter to the left of the chap's feet which would have running water along it. 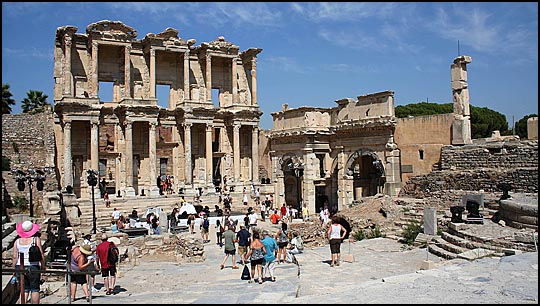 The Library of Celcus. Tiberius Julius Celsus Polemaeanus between either 105-106 or 106-107 AD was the Proconsul of the Asian province, the capital of which was Ephesus. 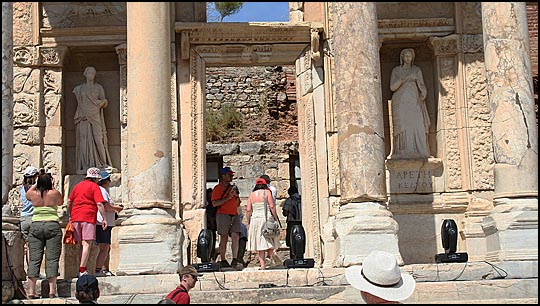 This is a reconstruction. It was built between 110 and 135 AD, destroyed by fire some centuries later and finally toppled by an earthquake 900-1000 years after it was built. The facade was reconstructed from fallen stone in 1970-78. 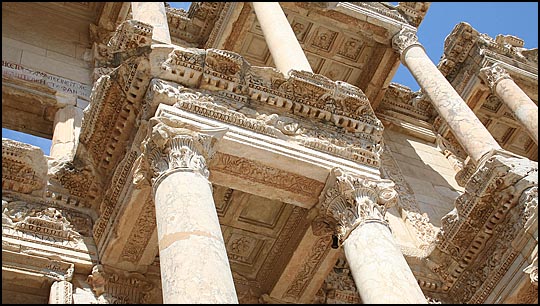 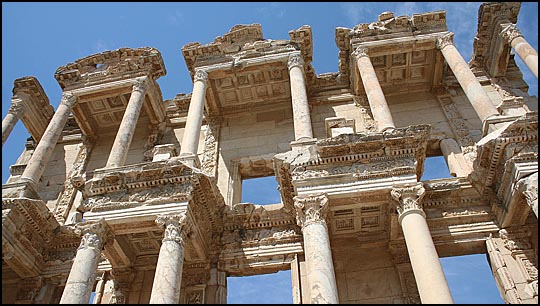 The upstairs windows face east so that the morning sun shone into the reading rooms. They were glazed with horn to let in light but to keep out rain and wind which might damage the scrolls kept in the library. 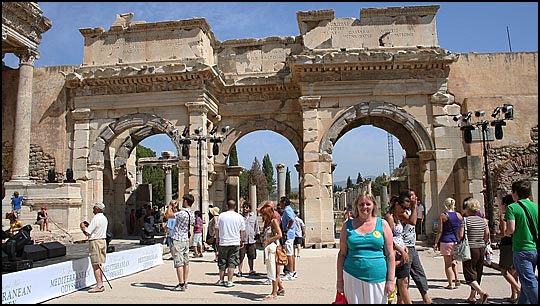 The gate with three passage ways at the right of the Celsus Library was built in 40 A.D by the slaves Mazeus and Mythridates for their emperor, Augustus, who gave them their freedom. 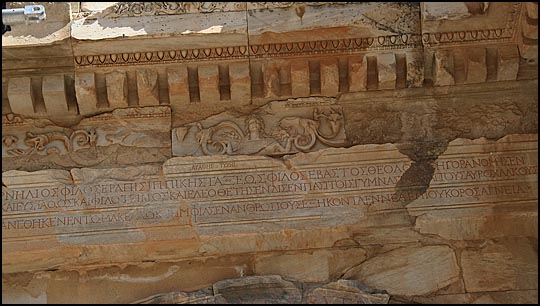 A detail of the carving on the face of the gateway. A damaged bull's head carving can be found in a corner of the gateway interior. 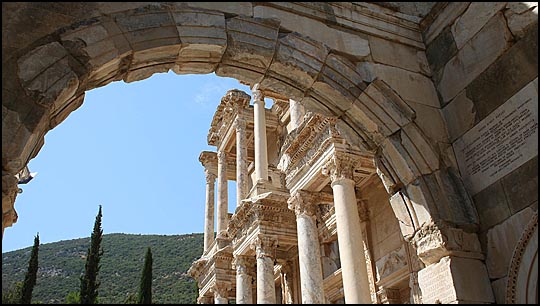 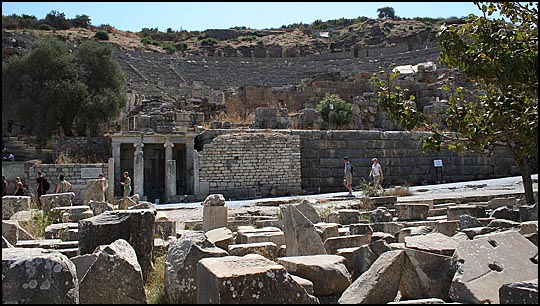 We passed through the gateway and came to the area where both St Paul and St John had preached. St Paul became embroiled in arguments with the silversmiths whose living was dependent on their sale of small figures of the goddess Artemis whose temple was nearby and was one of the Seven Wonders of the Ancient World. 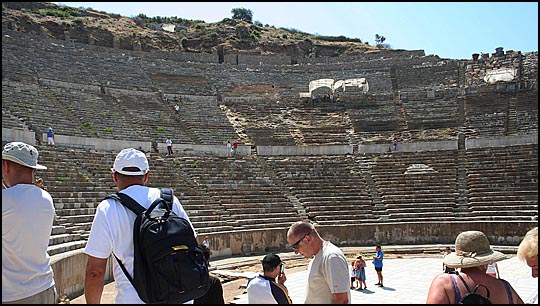 The magnificent amphitheatre is the second one you come to - even the first which was more a political debating forum is impressive but this is much larger and is why Genghis had told us not to be overly impressed with the Oedion when we first entered Ephesus. St Paul preached here for three years, this being recorded in the Acts of the Apostles. The Acts mention the Riot of the Silversmiths - they made silver figures of the goddess Artemis and Paul's attempts to convert people to Christianity were bad for business... 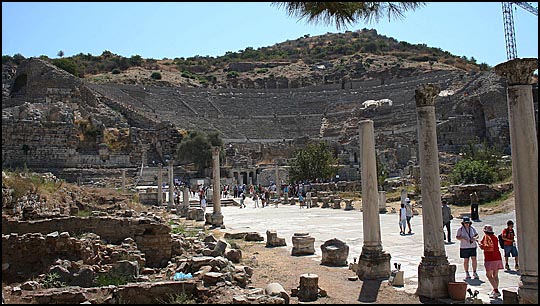 The Great Theatre was first constructed in the Hellenistic Period, in the third century BC during the reign of Lysimachos, but then during the Roman Period, it was enlarged and formed its current style as seen today. It seats 25,000. 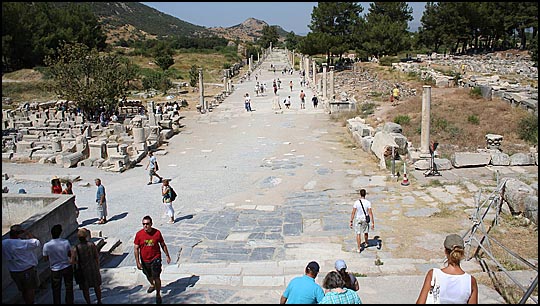 Harbour Street runs from the theatre down to the old Roman Harbour. In the 1700 or so years since the fall of the Roman empire the harbour silted up so much that the sea is now seven or eight kilometers away. St John the Apostle fell foul of the same silversmiths as St Paul and was chased down this street, taking refuge in a castle on the hill in the distance. The Roman general Mark Anthony visited Ephesus often, but in 33 AD he brought Queen Cleopatra with him and they walked hand in hand down this street.

Pearls of The Aegean Cruise Index
Posted by John Burke at 08:18