Just a swift diversion from the holiday for a moment! I'm not sure what made me think of these things, but anyway... 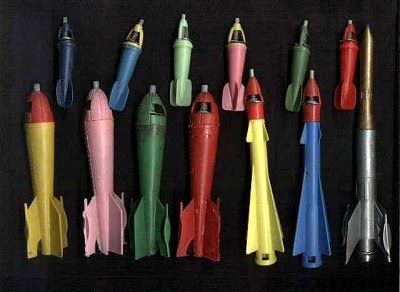 Come on lads - you remember these don't you? A favourite toy during the 1950s right through to the 70s was the cap bomb. Firing paper caps - they had a paper backing with a blister that was filled with a tiny amount of gunpowder and were used in toy guns, either singly or you could buy rolls of 50.

In these bombs you had to either use the single ones or rip a cap off the roll and put it under a spring-loaded plate attached to a rod that made the nose of the bomb. You then threw it upwards as high as you could and - if it hit the pavement when it came down - the cap fired with a bang. But not a big one...

I had an older lead bomb that had a nose that came totally off. You placed a cap against the body of the bomb, put the nose against the body and then tied a piece of string around from front to back in a groove that ran up the bomb. The deep groove ensured that the string didn't have a cushioning effect when the bomb hit.

I had a piece of string tied as a lasso. All I had to do was place the cap and tighten the lasso then I could twirl the string like a slingshot and send the lead bomb high into the sky. It made a far better bang when it landed than these very light plastic bombs, but it was absolutely essential not to be standing underneath when it fell!

Some of the bigger rocket type bombs came with a catapult to send them up.