Olympia and the Temple of Zeus

Thursday, 27 August 2009. Our port today is Katakolon and we jump onto a coach for a tour to the ancient site of Olympia. Not Mount Olympus, but the site of the ancient Olympic Games. 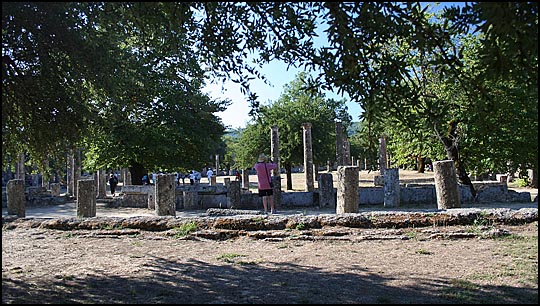 The Palaestra was built in the third century BC as part of the gymnasium complex, it was used to practice boxing, wrestling and jumping. And apparently still used for ducking practice (see below)... What makes this site somewhat different to some of the other sites we visited during the week is the fact that there's actually a bit of greenery knocking about. It is quite pleasant to walk around Olympia and there is some shade to be found. That's the plus side. 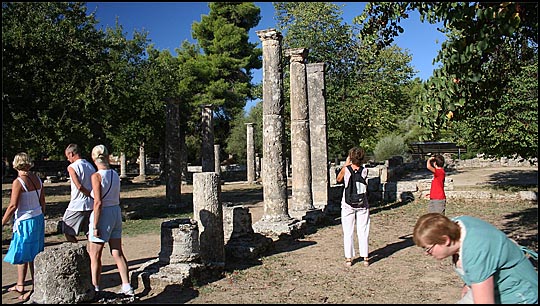 On the negative side there are so many lumps of what used to be parts of impressive buildings that it's difficult to make much out apart from the one or two bits that are obvious. Unless you like listening to guides rambling on I'd suggest learning a bit about the place and its history beforehand and what I wish someone had told me - find a map of the site and print it to take with you. 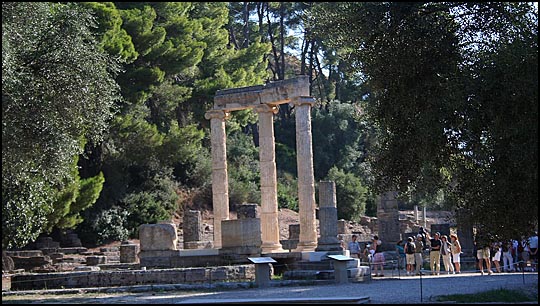 The Philippeion was an Ionic circular building of ivory and gold, built by Philip II, King of Macedonia. It contained statues of Philip's family, Alexander the Great, Olympias, Amyntas III and Eurydice I. Somewhere behind it is the place where they light the Olympic torch by sunlight reflected and concentrated by a curved mirror. Runners then carry it in relay to wherever the games are being held. 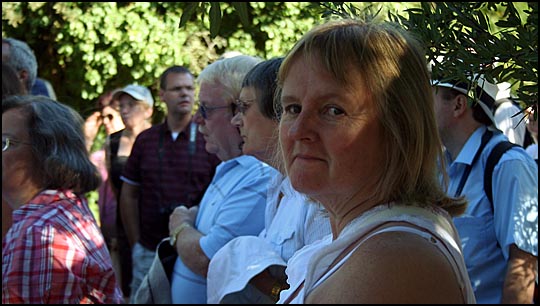 Miss Franny is giving me that look... She knows that any second now I will be so fed up with the drone of the guide's voice that I'll wander off to take more photos and worry about what I'm seeing later at home. 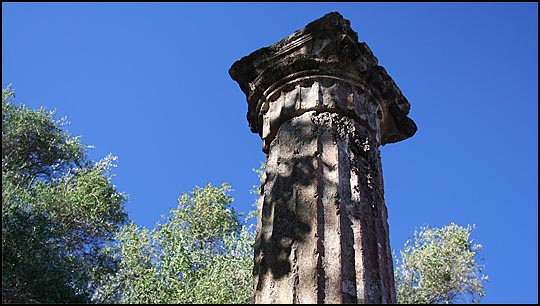 We were at Olympia for a limited time of course and so far hadn't moved for 20 minutes. I wandered off... 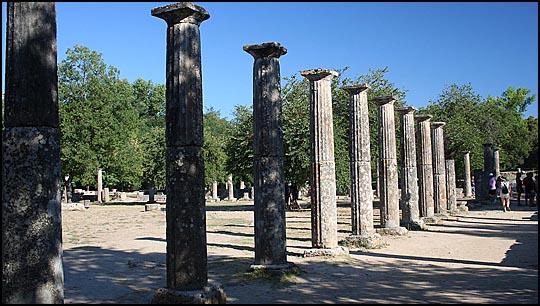 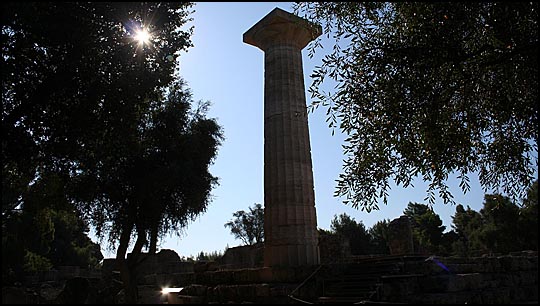 More about this particular tall standing column later, but it is one of the most exciting remains at the site. 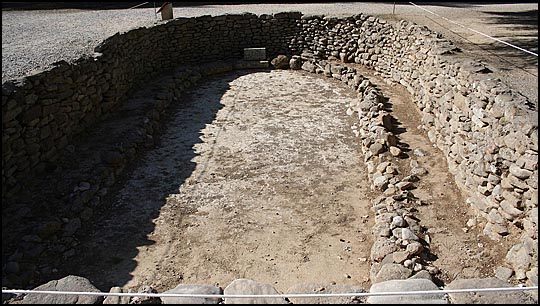 The remains of an early building. There is evidence of religious worship here from the 10th century BC, but evidence of building only from around 600 BC. For 400 years apparently they sat around saying "It's freezing - shut that door!" only to get the response, "Door???" 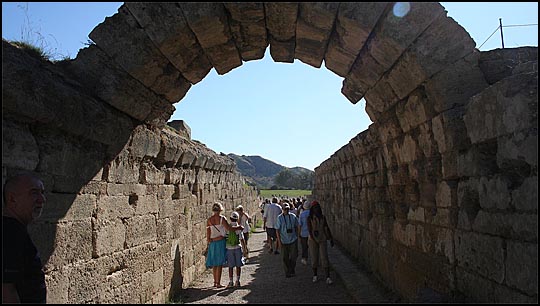 The Crypt was an arched way leading to the Olympic Stadium. In the very early days the Olympics were for men only. They competed nude and women were not allowed to enter the site on pain of death and being chucked over the cliff into the river as well! 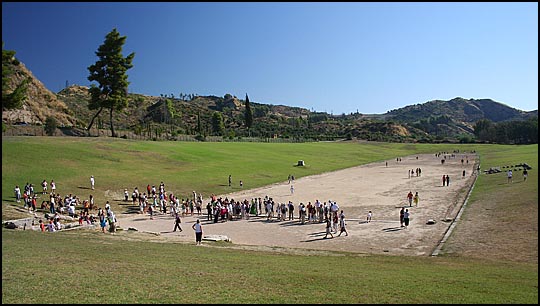 This is the actual stadium on the edge of the site. The site includes temples, bath houses, practice gymnasiums, the workshop of Pheidias, who sculpted the statue of Zeus for his temple - we'll hear of that in a moment - and a villa of Nero's. A chariot race was held between Pelops and King Oinomaos, whose daughter fancied Pelops. She had the pins taken from her father's chariot wheels. He was killed and Pelops took the throne. He was buried here in the 6th century BC. His tomb, the Pelopian, though, is in ruins. 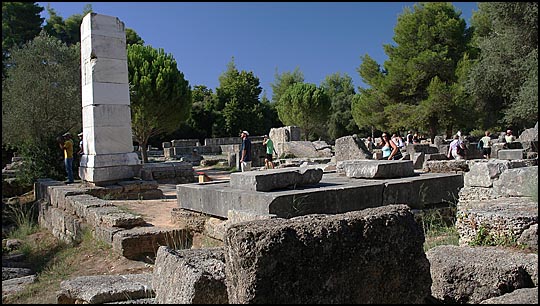 There's a good map on Wikipedia that would be worth having with you. I've had to go looking to make sense of what we saw - I soon tired of the guide I'm afraid and anyway she had such a quiet voice that only those who were treading on her toes could hear her... 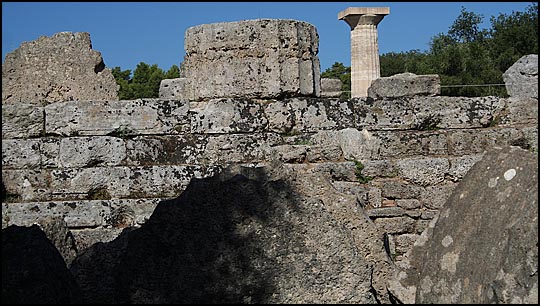 There were temples to both Zeus and his missus, Hera in the sacred area or Temenos. Shown here are the remains of the Temple of Zeus with that single column re-erected that we saw earlier. The temple held a fabulous statue of Zeus, made of marble covered with ivory and gold, seated with a small statue of crowned Nike, goddess of victory in his right hand and a sceptre in his left. The statue was considered one of the original Seven Wonders of the Ancient World and stood for 600 years here before being either pinched and whisked off to Constantinople and perishing in a fire in 475 AD, or perishing in the fire that destroyed the temple in 425 AD. 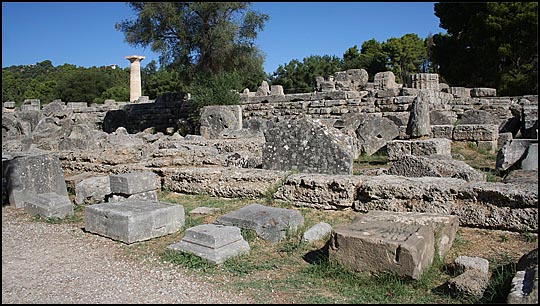 The workshop was discovered in 1954 - a momentous year as that's when I was born - and it contained not only a cup with an inscription "I belong to Pheidias" (honestly!) but some of his tools, moulds used for parts of the statue and even an elephant's tusk from which some of the ivory was used. Rumours that the cup had an inscription on the other side "so keep your bloody hands off!" are sadly untrue... Pheidias did come in for a bit of criticism as apparently if Zeus had stood up, he'd have banged his head on the roof of the temple. I wonder if Pheidias was ever struck by lightning...? Despite the ancient destruction of the statue, so many images exist of it on coins, medals etc, that we can be fairly certain exactly how it looked. 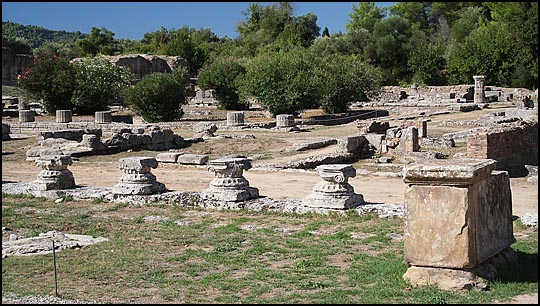 And that's all for this article. Now I'm going to strip naked and dash three times round the Stadium...

Pearls of The Aegean Cruise Index
Posted by John Burke at 19:05