Wednesday, 26 August 2009. We sail into Piraeus and head for the breakfast restaurant extremely early - our coach to Athens and the Acropolis sets off at 7:30am!!! 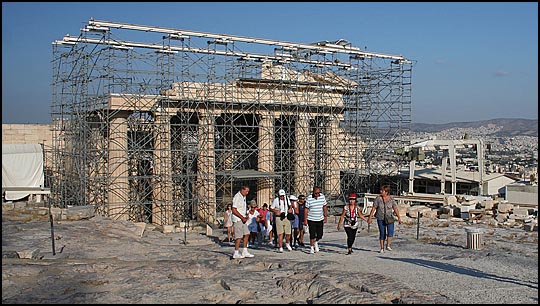 Mind you, it was worth it as we were only the second coach to arrive at the Acropolis. The photo shows the Propylaea - gateway to the Acropolis. We had climbed up roughly 200 steps and several ramps to get here and we were feeling thankful it wasn't in the midday heat! 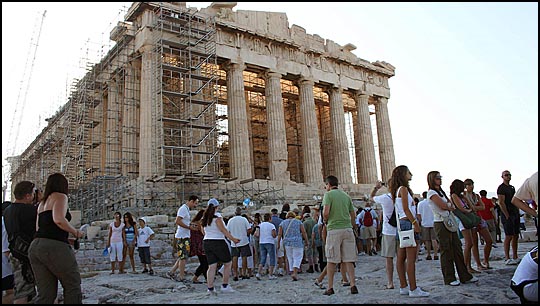 The Parthenon. Already the crowds were starting to gather and we ducked out of the lengthy explanations from the guide in order to grab photos whilst there was a chance of finding room to move about. The Parthenon is a temple of the Greek goddess Athena whom the people of Athens considered their protector. It was built in the 5th century BC and is the most important surviving building of Classical Greece. 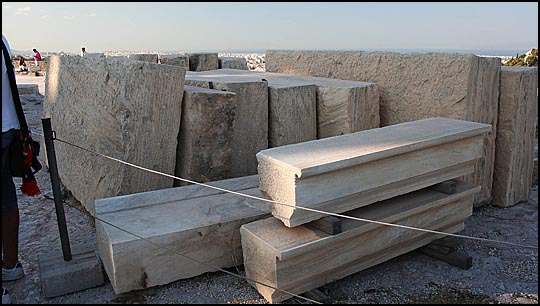 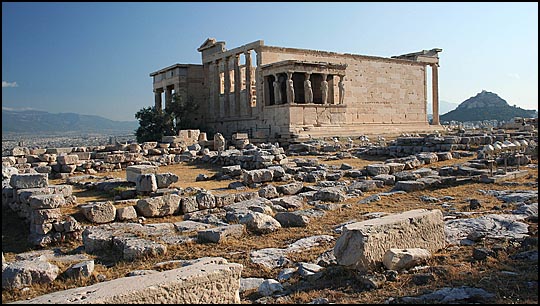 The Erechtheum, seen across the ruins of the fallen Temple to Athena. The temple as seen today was built between 421 and 407 BC. Its architect may have been Mnesicles, and it derived its name from a shrine dedicated to the legendary Greek hero Erichthonius. It may have been built in honour of the legendary King Erechtheus, who is said to have been buried nearby. 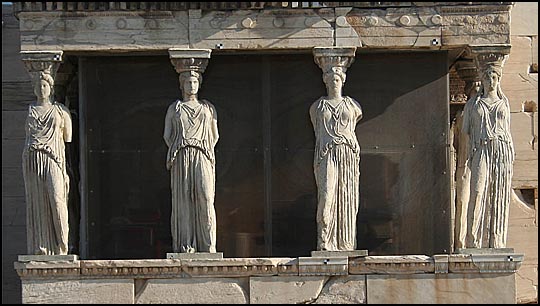 It has the famous "Porch of the Maidens", with six female figures supporting the porch roof. The figures are the caryatids and carry the weight of the porch and its roof on their necks. 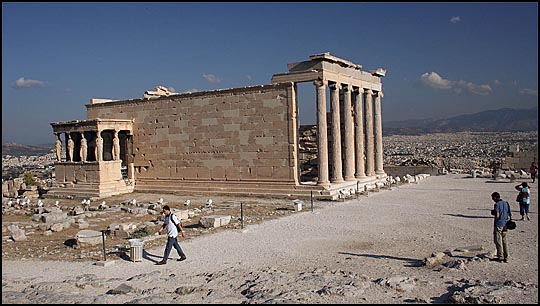 The temple itself was dedicated to Athena Polias and Poseidon Erechtheus. Apparently there was a sacred snake of the temple, which lived in the foundations somewhere. The Athenians believed that its well-being was linked with the safety of the city. Consequently the pampered reptile was fed honey-cakes by the priestesses of Athena Polias and if it ever refused to eat the cakes this was seen as a disastrous omen. 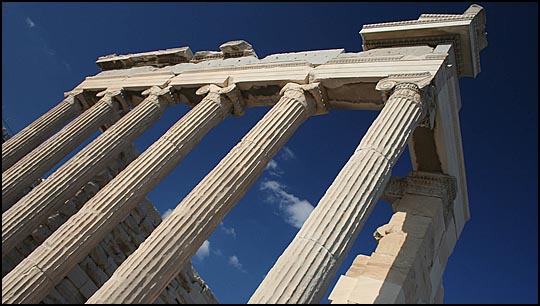 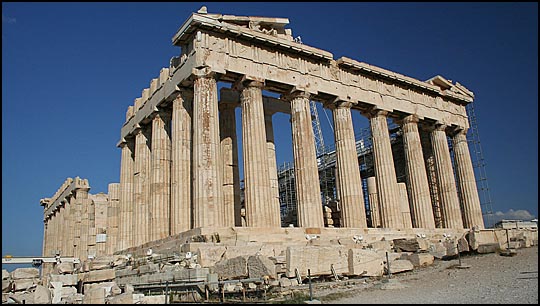 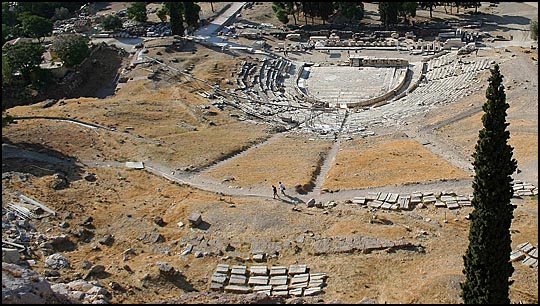 The Theatre of Dionysus at the foot of the hill of the Acropolis was dedicated to the god of wine and fertility. Aeschylus, Sophocles, Euripides, and Aristophanes have all appeared here - but not for a number of years... 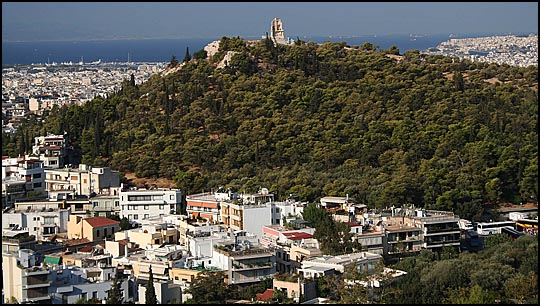 The Acropolis makes a wonderful viewpoint over the city of Athens. This hill is the one that Cliff Richard sang "The Next Time" on in the film Summer Holiday. 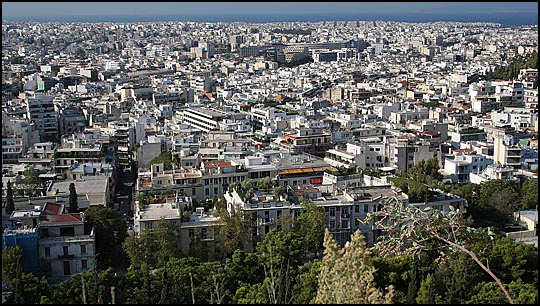 I suspect Athens has grown a bit since the Acropolis was built! 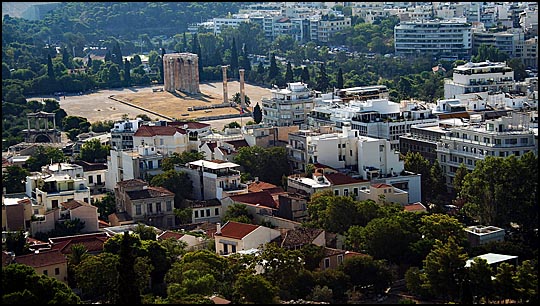 In the distance are the remains of the Temple of Olympian Zeus. It took 650 years to build by which time Athens was under the rule of the Romans through Emperor Hadrian. 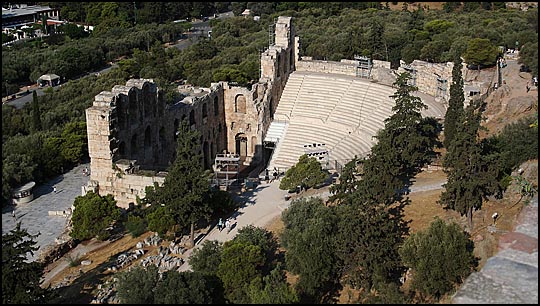 The Odeon of Herodes Atticus is a stone theatre structure located on the south slope of the Acropolis. It was built in 161 AD by Herodes Atticus in remembrance of his wife, Aspasia Annia Regilla. It had a wooden roof, and was used as a venue for music concerts with a capacity of 5,000. 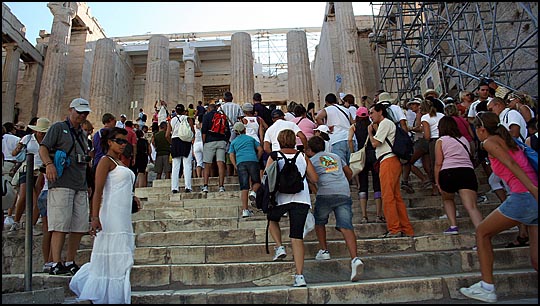 By the time we had seen all these sights the Acropolis was heaving with people to the extent that we had to push our way through people, particularly at the Propylaea and steps down from the gateway. Given that the steps are fairly steep and with no hand rails this made us a little wary to say the least! 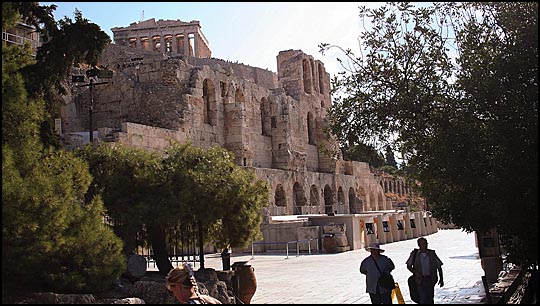 We came to the bottom near the Odeon of Herodes Atticus which is seen from ground level here. The Parthenon peeps over the top of the Acropolis hill.

Pearls of The Aegean Cruise Index
Posted by John Burke at 07:49