Sunday 23 August 2009. The coach brought us back to the port of Aghios Nikolaos and we went on board to have some lunch and then dragged ourselves off the gangplank again in the afternoon despite the temptation of the Horizon Bar because I knew I couldn't disappoint my readers... Or something like that! 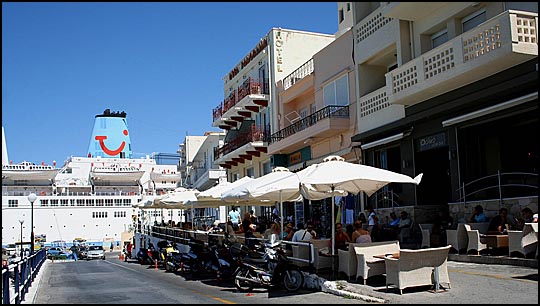 The ship was moored so close to the town and shops that we could literally step off and then straight into the tourist area. Aghios Nikolaos means Saint Nicholas. Apart from the Christmas association he is patron saint of both Greece and sailors so it's not all that much of an unexpected name for a coastal town in Greece! 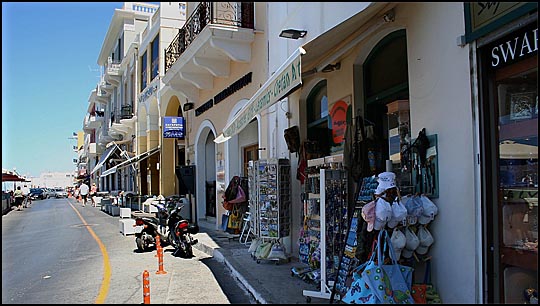 Fran chose a shop and we went inside. Zorba the Greek type music was playing, making me want to link arms with someone and dance. The shop's owner must have seen it in my face because he came out to chat and swap stories whilst Fran was choosing thimbles and fridge magnets. His English was a little halting and yet he still launched into a story about his diet and how he used to be 110 kilos... Now bearing in mind that I'm still a stones and pounds man and haven't yet been converted to metric it would have been confusing enough. Trying to sort it out from a Greek accent was making me glaze over... 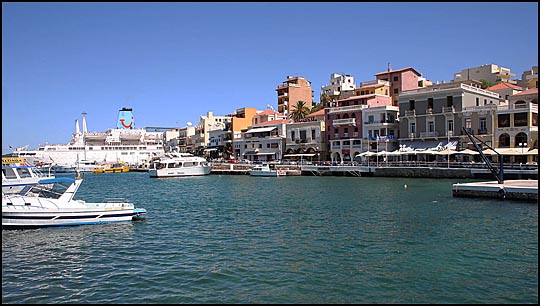 We walked around the harbour which is built up on two sides with the others being the sea and the dock where the ship was moored. There was a chap with a spear gun scuba diving, swimming over the rocks at the bottom of the harbour and we watched him for a while but nothing came to eat him and we tired of it rather quickly. 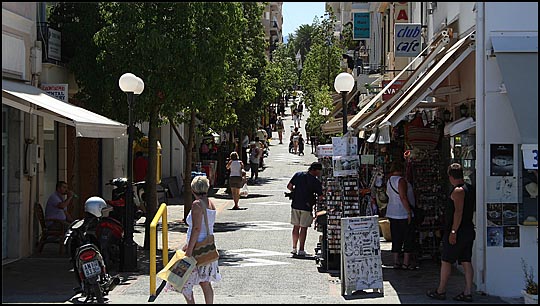 Looking up the side streets from the harbour invariably presented us with a view of a steep slope heading upwards. When we run out of flat bits we'll head up one... 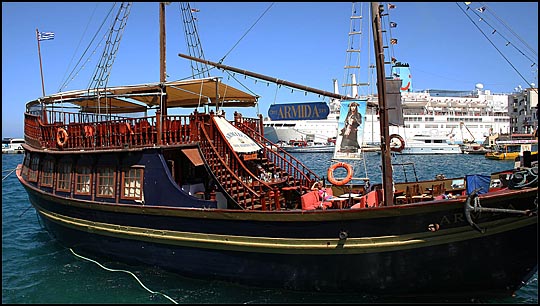 An old galleon style sailing ship was moored up opposite our ship and turned out to be a cafe/bar when we got closer to it and was deserted apart from its young owners or operators. 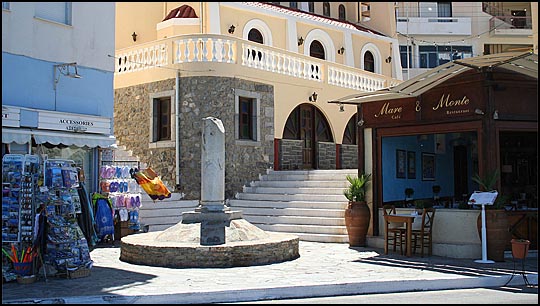 We came across this ancient column, broken off and mounted decoratively on the pavement at the meeting place of two flights of steps leading up the considerable slope away from the harbour. 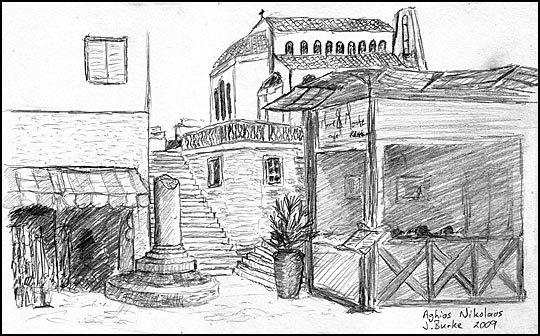 I spent half an hour doodling whilst Miss Franny went off to look at even more shops. I finished this off later when we got back on the ship and I had something long and cool standing by me... 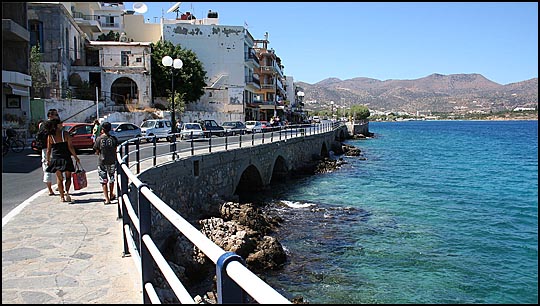 We ran out of interesting bits along the stretch of coast and doubled back on ourselves to head towards a road bridge which separated the harbour from a lagoon. The scuba diver still had a full compliment of arms and legs and was so complacent that he was diving further down than his snorkel could cope with and returned to the surface with a spout of water like a whale... Whatever floats your boat, I say - but I'm pretty sure I'll go through life without blowing water out of my snorkel thank you very much! 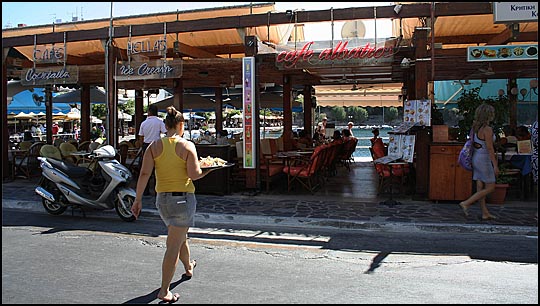 We came to the road bridge and turned right to have a look at the lagoon. It's described as a "bottomless" lagoon. It is volcanic in origin, the water filling a sunken chamber and even Jacques Cousteau and his team were unable to find the bottom when they tried. Our first glimpse of it was found by looking through the cafe/bars lining it. 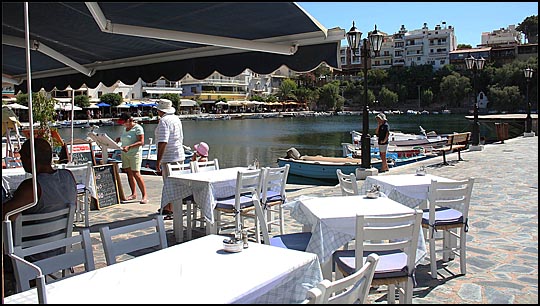 Along two edges of the lagoon are the cafes and shops and along the inland edge of the lagoon is a park. Pleasure boats line the edges alongside the bars and restaurants and souvenir shops. It was a very pleasant place to be. 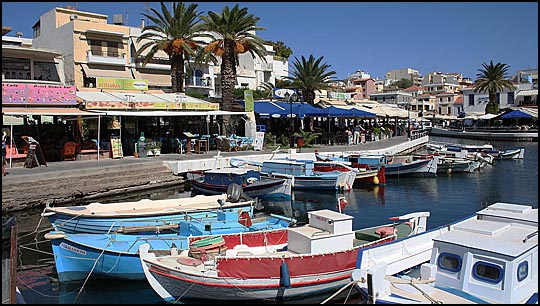 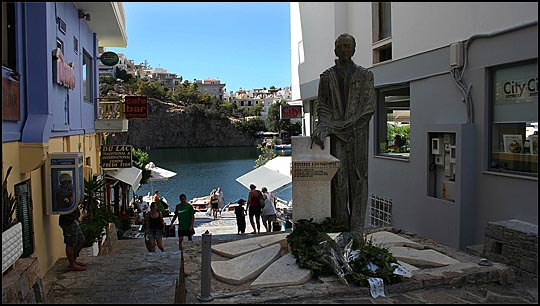 We walked round half of the lagoon and left it to climb up into the main shopping streets of Aghios Nikolaos. 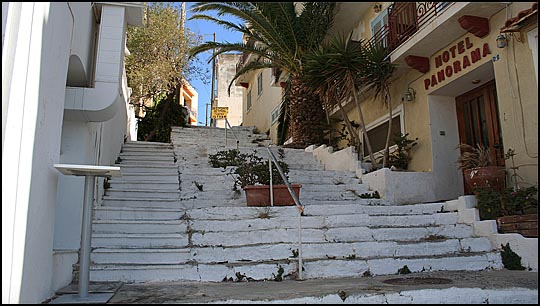 Some of the slopes are so steep that they are steps! We spend some time looking round the main streets and then return to the ship and submit to the pampering attention of Karen and Raquel in the Horizon bar. The ship sails at six o'clock and we settle down for the overnight trip towards Turkey and the port of Kusadasi.

Pearls of The Aegean Cruise Index
Posted by John Burke at 17:29