The morning of 9 July 2008. The Island Star is making her way into Livorno harbour as we make our way up onto the deck. 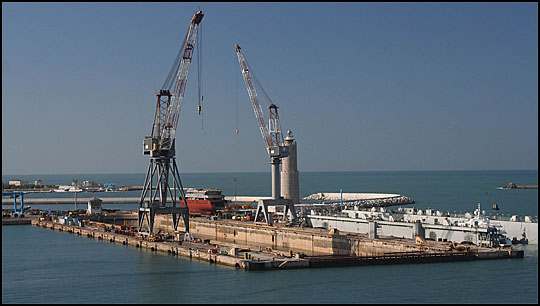 We have been here before a couple of years ago but the only thing I could remember about it was that the harbour was as much an industrial port as a tourist port and that there were large piles of gravel waiting to be loaded onto cargo ships. 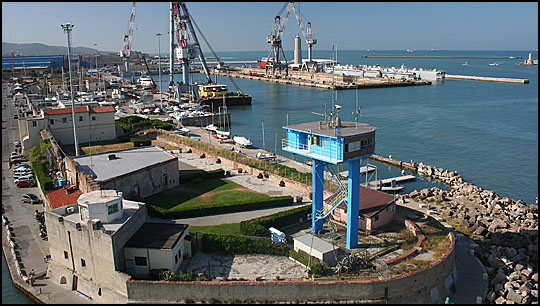 We sail past this pier with port authority buildings on it. Someone had taken the trouble to design a bit of landscaping and grass on it - a nice touch! It's always fascinating to watch other people work and in particular to see how other industries that you aren't familiar with go about their business. 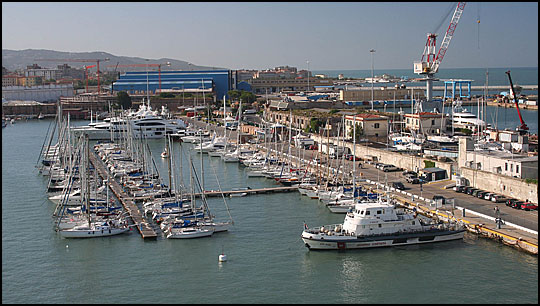 In addition there's a strong design element to dockside cranes and floating pontoons, small islands and blue sea that a photographer can't ignore!

It must have been fascinating in the days before those huge containers that you see everywhere these days. Watching cargoes being swung up out of ships, wondering whether a car, or a piano, or a large unidentifiable piece of machinery would emerge from the hold, swinging on the end of a chain. There is a large marina attached to the harbour, which anyway, leads into a series of canals. More about those in a future posting. 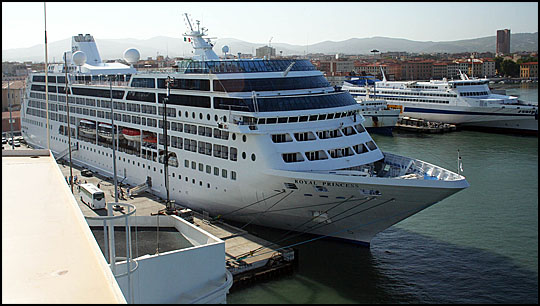 We carried on along the deck and headed for the Island Star's Beachcomber Restaurant. The previous night we had dined in the Steak Restaurant and someone had a birthday. A group of waiters had come in to sing an elongated and exuberant Happy Birthday to her and afterwards (so Fran says) the waiters nodded the guitarist over to me. "I have a song for you, Sir," he said and started to sing Don MacLean's Vincent (Starry starry night). I knew it would surprise him so I joined in loudly to sing harmony with him. The room went dead silent and a lot of applause burst out as we finished. His eyes were twinkling - there is always a special bond that quickly forms whenever people sing or play music together. Now as we entered the restaurant, any waiters who had been in the Steak Restaurant at the time came forward to say hello and to point out empty tables or just to talk. My guitarist friend made a point of passing a couple of friendly words each time he saw us afterwards. 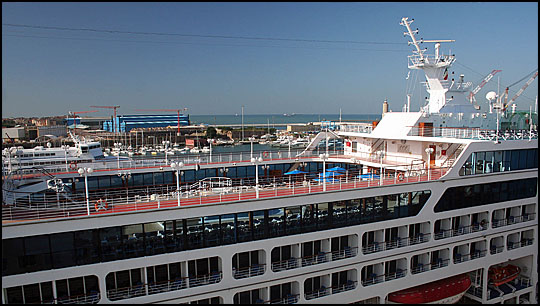 Breakfast over with, we came back out onto deck to find another cruise ship, the Royal Princess, on the opposite side of our pier. She seemed absolutely deserted. Was she at the start of a cruise, or had they made going on excursions compulsory?!? 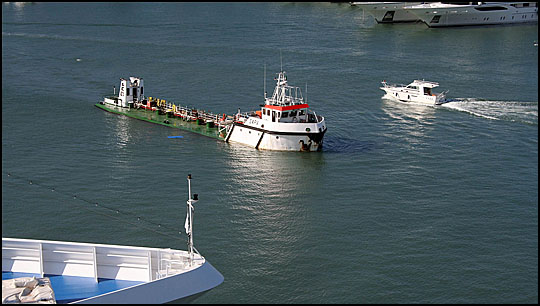 I can't recall ever seeing something that lay quite so flat on the water as this green-decked curiosity that came by! Does anyone know what it is or what it does? Leave a comment and put us out of our misery! Ships and boats of all sizes come into Livorno. There are some excellent excursions from Livorno, including both Florence and Pisa. Again though, we had done both of these in the past and were looking forward to a boat trip along the canals of Livorno itself.

Will we be boarded by pirates? Will our canal trip end in disaster? Will I just make something up for dramatic effect? Hmmm... no somehow I never seem to have to do that... Life as a nutter is interesting enough!