Friday 11 July 2008. The Island Star reaches Barcelona, the last port of call of the week before returning to Palma. We've been to Barcelona a couple of times before, the last time just getting off the ship and walking up Las Ramblas. We had wanted but failed to find Gaudi's cathedral La Sagrada Familia and so had decided that today would be all about finding and seeing the cathedral. 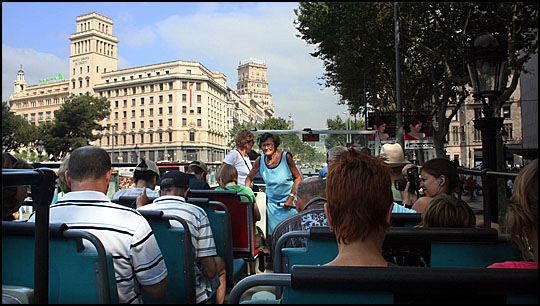 When we looked on a street map it was much further away from the port than we had originally thought. We would need some transport. Having got off the ship though, we saw the familiar red double decked bus of a city tour and got onto that. We knew we would have to transfer from the blue line to the red line. That was the first problem... 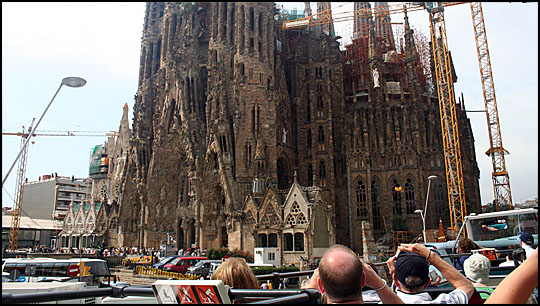 "Blimey! Look at the queue!" We dashed across to join the queue which almost immediately suddenly became at least three times longer. However a steady stream of buses kept taking away sizeable chunks of the queue until we were able to get on one ourselves. We then realised that our day was rapidly being eaten away. It took us an hour and a half to get to the cathedral. Worse, the routes were one-way. The cathedral was only a quarter of the way around the red line which meant it could take hours to get back to the transfer point and then the blue line was also only a quarter (if that) into its journey by the time it carried on from the transfer point. 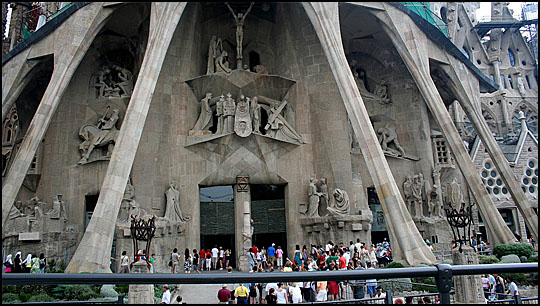 We decided we would have to get a taxi back to the port and do away with the rest of the bus tour. An expensive bus ride to the cathedral then! Anyway, the cathedral itself is well worth seeing. I've heard from people who love it and people who hate it and who think a ridiculous amount of time and money is being spent on building it. 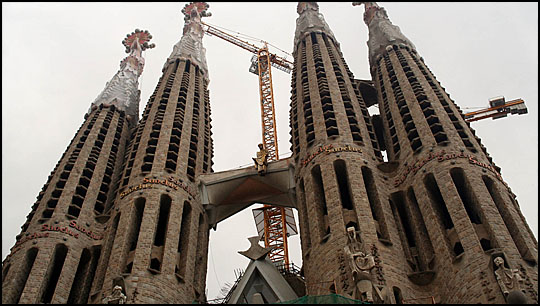 The building work was started in 1882 and is not due to be completed until 2026. The famous towers shown here are there to frame a larger tower of Jesus Christ, still to be built. The carvings of the facades, of which there will eventually be three, are fantastic in their complexity and imagination. 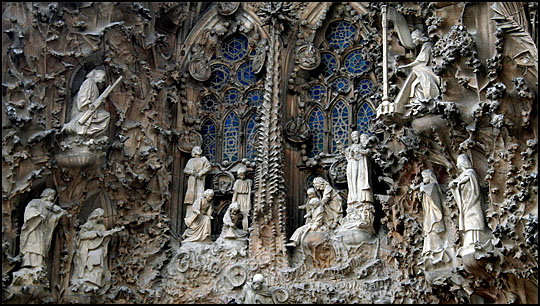 Part of the appeal for me is that every time we see it, we can identify new bits. This time carpenters were busy building a wooden frame for something - a screen, a balcony, maybe even the top of a tower? We found a taxi without any difficulty. He must have oiled all the hinges every night, I've never known a car door shut so easily. Consequently Fran slammed it much to the driver's disgust and he gave a long protest in Spanish that was totally beyond us. When we got out I gave it a gentle push and it slammed again so we walked away to the sound of his anguished protests... Sheesh! Leave the oilcan alone and let it grow a bit of resistance! 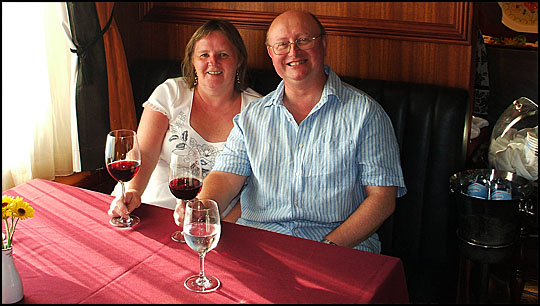 That night we celebrated the end of the cruise with a meal in the steak house, attended well by Ronnie and Vivian. 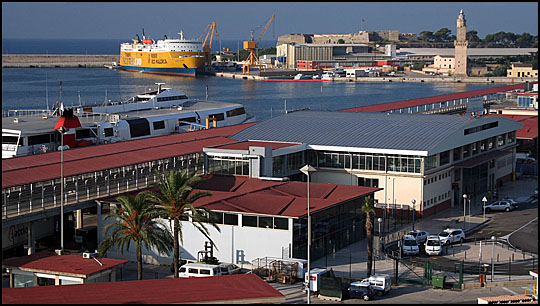 Saturday 12 July 2008. Overnight the ship has sailed from Barcelona back to our starting point in Palma, Majorca. Our bags are already sitting out on the dockside waiting for us as we wake, have a quick shower and breakfast and get off the ship for the last time this trip. We had a blast. Hope you enjoyed coming with us!