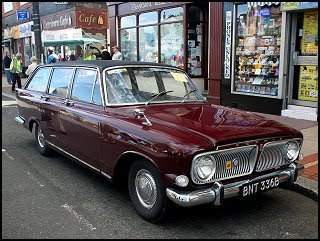 I've been uploading more photos to Flickr from the Fleetwood Tram Sunday event and reached this one of a superbly kept Ford Zephy 6 MkIII estate car.

Being working cars, estate cars tend not to remain in such good condition so I'd guess this is a fairly rare example.

It brought back some wonderful memories for me though because back in 1971, aged only 17, I bought a Ford Zephyr of my own.

This was a saloon model - a Zephyr 4. The number represented the number of cylinders - the Zephyr 6 had a six-cylinder engine whereas the Zephyr 4 had a 4-cylinder 1700cc engine. 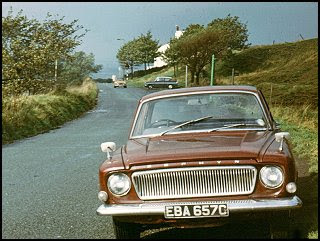 Delving way back to those days, here's a photo of my Zephyr from a colour slide taken at Hollingworth Lake near Rochdale. It was in Lancashire then, it is now part of Greater Manchester, though I still think of it as Lancashire.

The main external difference between the Zephyr 4 and Zephyr 6 was that the front grill was divided for the Zephyr 6. On the Zephyr 4 it was a single wide grill. The top of the range Zodiac had twin headlights and the rear window struts were much narrower so it had better rear vision.

The Zephyr had a bench front seat that could easily fit three people and had a gear lever coming from the steering column with a handbrake lever coming from under the dashboard. It had style, it had class, it had rust. Eventually the rust around the suspension points under the bonnet got so bad that when closing the bonnet the hinges didn't so much close as they bent the metal they were attached to and sunk downwards. This meant that the front end of the bonnet would close ok but the rear end would finish up halfway up the windscreen. This was the reason I eventually had to get rid of it. It remained for many many years my favourite car of all time and still ranks up there. But perhaps two cars surpassed it in my affections. One is mentioned here and the other? Maybe that will have to wait for another day!
Posted by John Burke at 08:24