Last Hours on the Island Star 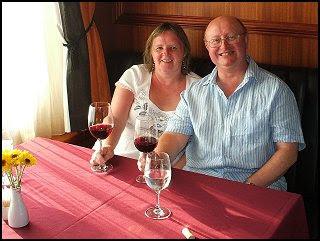 The Island Star leaves Barcelona and we go for a final meal in the Steakhouse restaurant. We asked for a window table and sat near to the salad buffet, idly watching the occasional ship and the endless movement of the waves whilst we ate and talked about what we had seen and done on the holiday.

There wasn't any great sense of it coming to an end because we are already booked to return to the Island Star later this year, this time taking my mother along. That could be an experience in itself. I might ask the captain if he has a plank he can stick out from the side, or should I take my own?

We went to the Ocean Theatre and watched the show, then wandered for a while, taking in the ship for one last time. The Pub, the Bounty Bar, the casino, the shops and "Harbour Walk", the decks and the Beachcomber Restaurant for a late night coffee. 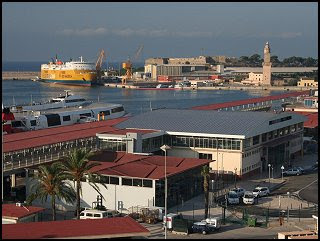 The following morning sees us back at Palma in Majorca.

Fran does the usual squinting from the decks to see if she can spot our suitcases which have been taken off the ship and lined up with about a thousand others waiting for us to collect them and take them to our coach for the trip to the airport. The ship has fooled her this year - they are inside one of the buildings on the portside.

The trip to the airport is uneventful and the flight is on time. Manchester is grey, cold and wet. Not much new there perhaps, but enough to make us shiver!

We arrive back at home and make a fuss of the cats who waver between being glad to see us and a desire to ignore us as punishment for leaving them behind. Gill and Eddie have been taking good care of them though.