We Went to Ghent

Sunday 11 August 2019. We are on a Leger Tours long weekend tour - Beautiful Bruges and Ghent and, staying in Bruges, today is our excursion to Ghent. 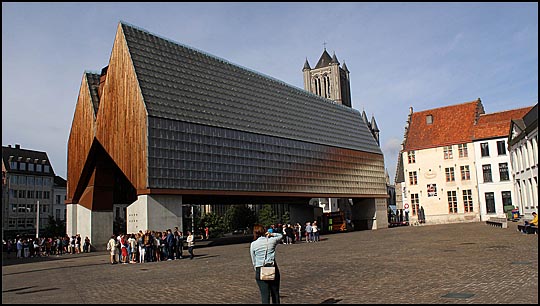 The drivers hadn't been to Ghent for around four years and decided the route in had changed considerably. However after a couple of ways in that ended in tram only tracks, Bob got us to hold a pole through the skylight so it looked like we were a tram and we eventually got off the coach just a short walk from the city centre. This structure is a shelter for horse drawn carriages. They were all out trotting around somewhere... 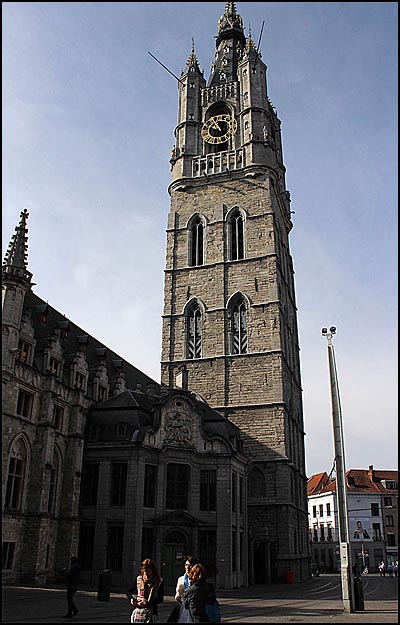 This bell tower was on a direct route back to our meeting place and fronted onto a large square so we took it as our landmark for returning to the coach. It is known as the Belfry of Ghent and is 91 metres (298.5 feet) tall, making it the tallest belfry in Belgium and it has UNESCO world heritage status. The bells make up a carillon and number in excess of 50 bells. 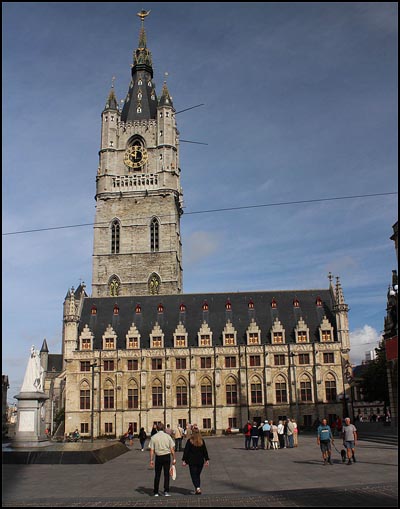 The Belfry with the Cloth Hall in the foreground. Visitors can climb up the bell tower to see the workings of the carillon and the views from the top. Plus a free ride in an ambulance I imagine if I tried it... 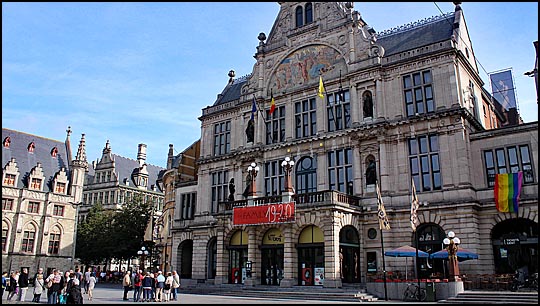 The Royal Dutch Theatre was built in 1899 and since 1965 has been the home of a public foundation the NT Gent (Nederlands Toneel Gent). 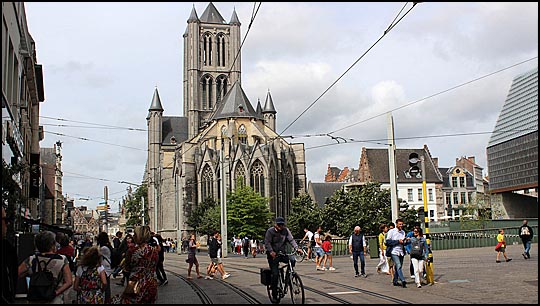 The Church of Saint Nicholas dates from the 1200s and is of a style prevalent in Belgium, known as the Scheldt Gothic. 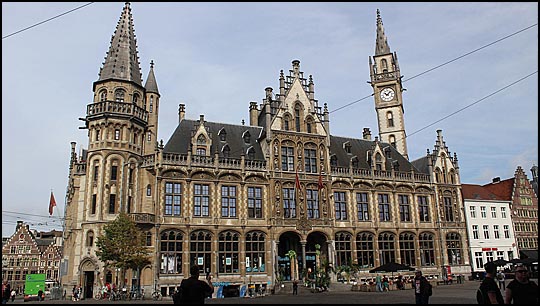 Believe it or not this is a 37-room hotel, set on the top two floors of the Post Office. Rooms are named for their size - the smallest being the stamp rooms, then there's the letter rooms which are bigger... You can even stay in the octagonal tower which gives you a superb 360 degree view over the city. 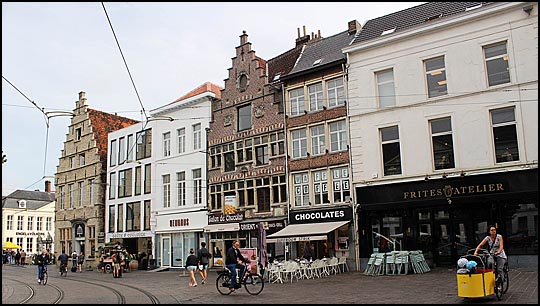 The city is a fascinating mix of medieval and modern. This particular spot was on a bend in the road and we would return here to sit at one of the tables of Juffrouw Strik (under the "Chocolate" sign) to have a drink and for me to do a sketch of the view from there. 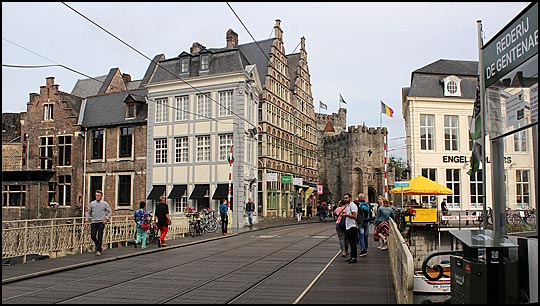 The view includes a bridge over the River Lys (Lieve) and the Gravensteen, a 12th century castle with roots going back to the 9th century and looking every inch as though it had come from a fairy tale. It was the seat of the Counts of Flanders, though once they left in 1353, it went through a number of different purposes including a court, prison, mint and er... a cotton mill... It is now a museum. It has a torture device collection in the... um... pantry... "Don't do that to me pies!" 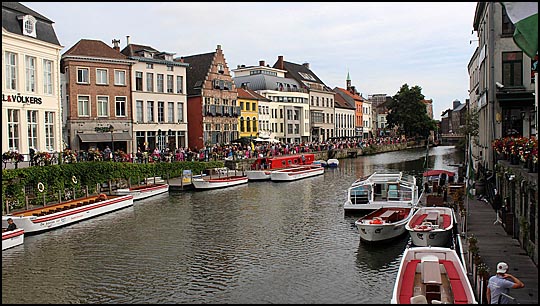 As we crossed the bridge over the Lys we saw that although the larger shops were shut, this being a Sunday, there was a flea market going on, as far down the river bank as we could see! 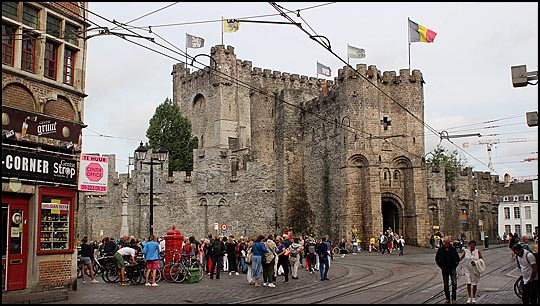 Before going to have a look at some foreign antiques, we had a closer shufti at the castle. "Stay clear of the pies..." advised an old man, tapping the side of his nose. 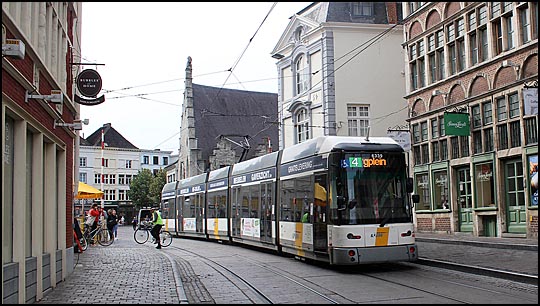 Wait... was that a tram or Bob and Ray in the disguised coach? Ah no, it's a tram! 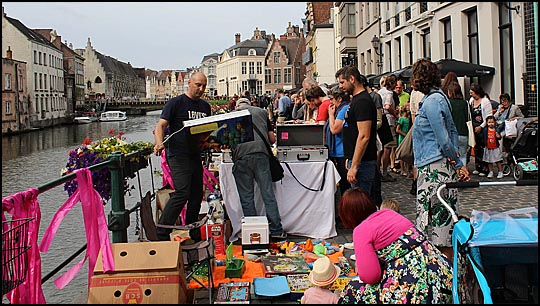 We went to have a look at the flea market. Riveting stuff as not only was there lots of foreign antiques, but familiar boxes with Belgian text - old toys and games and bits of home equipment. There were a lot of Beatles vinyl albums and CDs, plus Belgian versions of their 1960s magazines. 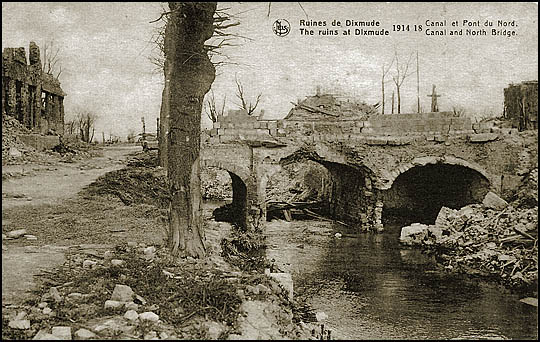 I found a load of postcards on one stall and spent a few minutes looking through them. I bought a couple of World War One postcards for only one euro each. Back in the UK they would probably be five times that at least, but I suppose here we were, standing over the ground where all this carnage took place. The postcards won't be as rare here as they are in the UK perhaps. Belgium was a neutral country invaded and occupied by the Germans from 1914 all the way through to the Armistice. 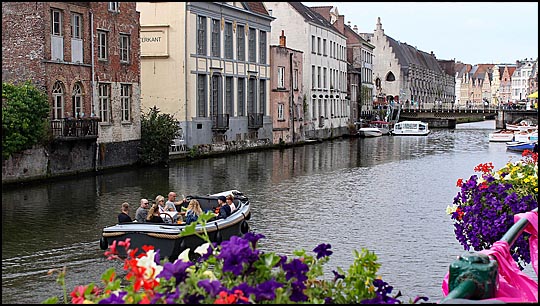 The market turned down some side streets and we walked a full circuit of streets without ever leaving the long lines of laden stalls. Someone back on the coach moaned that we should have gone when the shops were open. That would have meant missing this wonderful market altogether. You can't please some people. 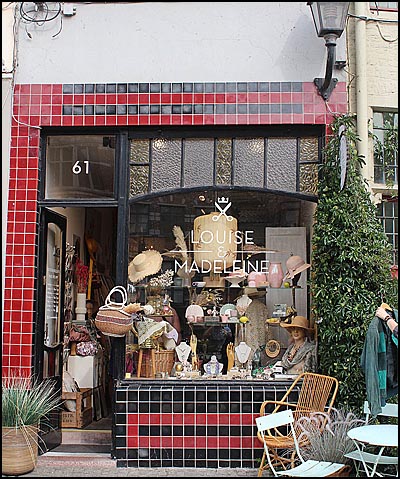 Besides many of the smaller shops (make that the more interesting shops) were open anyway. 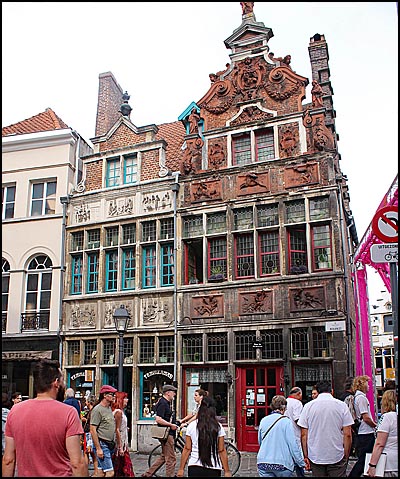 There was a real mix of people wandering around. We heard several European languages and came across some of our fellow coach party. Strangely their main topic of conversation seemed to be "Do you know the way back...?" Er, yes I do thanks... 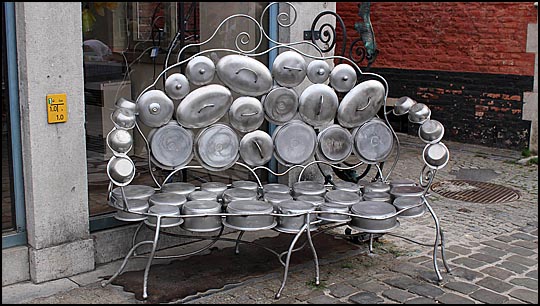 Ah yes - the throne from the TV show Game of Pans... 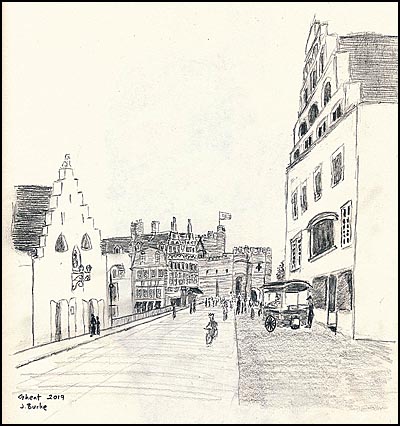 We started heading back and stopped for the fore-mentioned drink and sketch. Somehow the proportions of left and right are not quite equal, but to be fair I was sitting close to the wall on the right and it looked big! That's my excuse and I'm sticking to it! 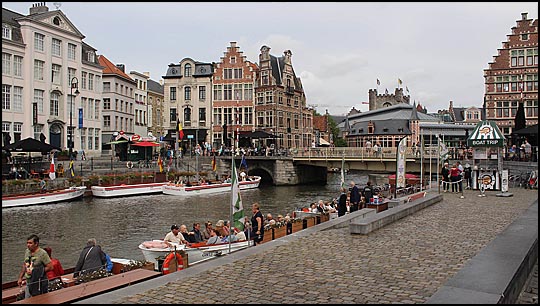 We walked off at an angle to the way we had come, trusting that we would be able to see the huge Belfry eventually to find our way back. It wasn't hard in the event. 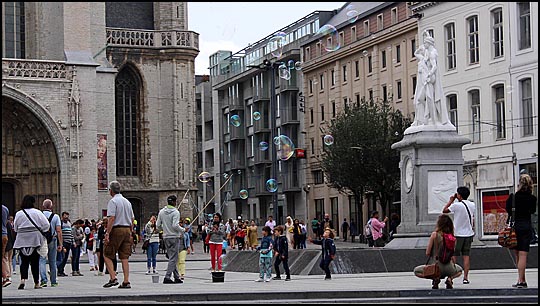 See? Here we are back at the main square. We went into a chocolate shop to buy some Belgian chocolates. This was quite an adventure as I don't speak any Flemish at all and the shopkeeper had very little English, but there were enough words on the menu she showed us to be able to pick out things like caramel, orange, praline, etc. and we came back with a box full of the most lovely rich chocolates that will last quite a while as to eat more than two in a night is tempting fate. But to put one on your tongue and then try to ignore it is to unleash a taste like no other!

On the square one chap was entertaining kids and adults alike by blowing lots of huge bubbles with nothing more than two sticks, a bucket of soapy water and some string tied into loops between the ends of his sticks. 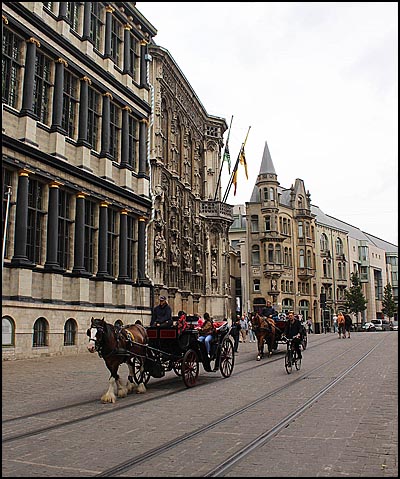 We turned to head back towards the meeting place, finding two thirds of our fellows waiting across the road instead of where we got off. The other one third gathered around us and then when Bob and Ray turned up they had to stop somewhere else anyway... 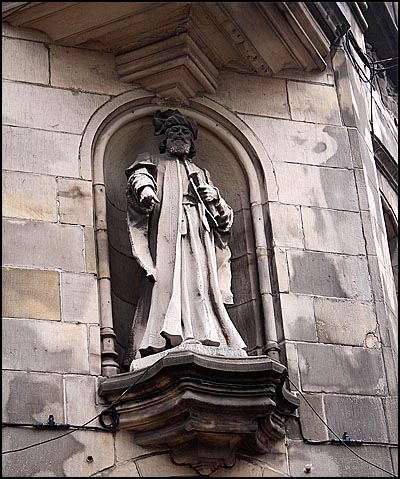 On the way back to the meeting place I found this statue looking at me sternly from the wall above the door to the police station. 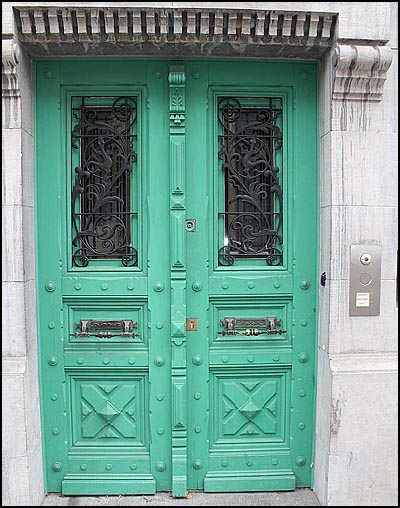 And to finish, a nice piece of decorative street furniture on this door, both the iron work sculptures over the glass and the hefty handles to close the doors from the outside.

Return to the Beautiful Bruges and Ghent index page
Posted by John Burke at 21:09