Another collection of sketches done in the UK, this time dating from 1993-94. A mix this time of sketches done on site in plain view of any would-be spectators and others done at home from photographs, either my own or found in magazines. 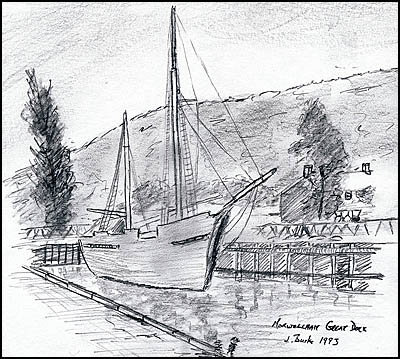 This was done on site at a living museum at Morwellham near the Cornwall border with Devon. Morwellham was an old copper mining village. The copper ran out and the villagers followed... It was a foul day as far as weather went, but I had a go at the old barque and dock anyway. 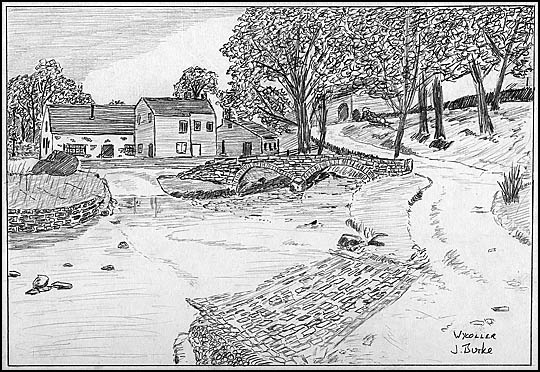 This one was done at home from a photograph I took at Wycoller near the Lancashire border with Yorkshire. I promise not all of these sketches will be borderline... (puns not improved then? - Editor) Wycoller has a ruined old hall that provided Charlotte Bronte with enough memories to describe it as Ferndean in Jane Eyre. 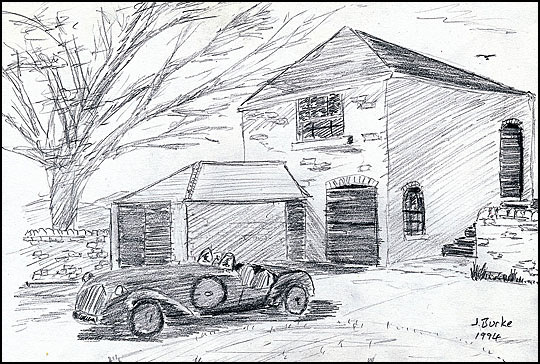 Drawn from a tiny photo in the pages of a photography magazine. I used to get Practical Photography every month from the early 1970s through to the mid 1990s though often other magazines such as Photography, Amateur Photographer and Camera User were added as well. 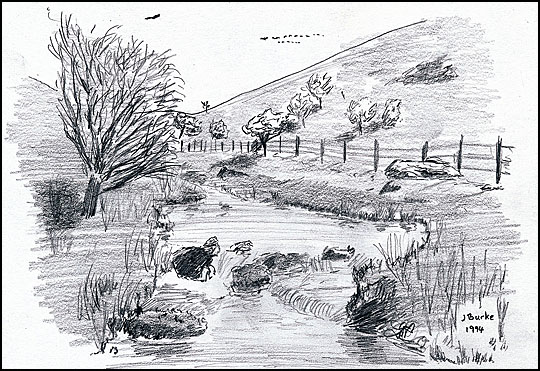 Another trip to Sedbergh with friends and a stop on a walk to do this. I remember Ray taking me to watch the bell ringers, of whom he was a member. A fascinating experience as a visiting ringer called out the numbers or changes to play different peals during the space of an hour or so. 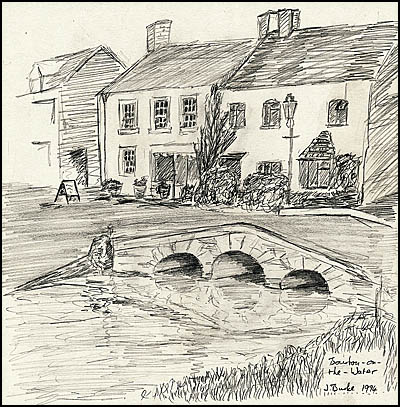 Another done on site was this sketch of Bourton-on-the-Water in the Cotswolds of Gloucestershire. 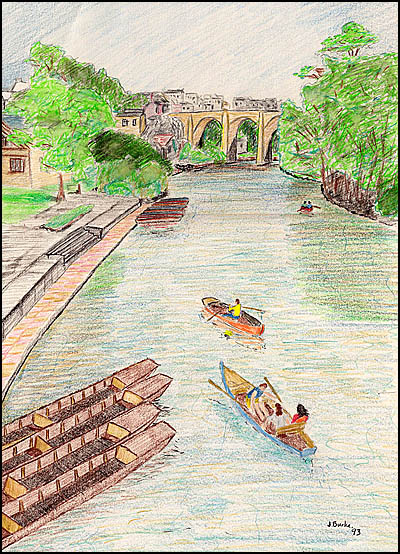 This started life as a black and white photo taken from a bridge (but not the bridge) at Knaresborough in Yorkshire. The famous bridge is seen on the horizon. Colour pencils on A3 paper. The vast majority of these were done on an A5 sketch pad using a propelling pencil with HB lead. This was another magazine photo. A sketch done on holiday in Bridlington in 1994. Bridlington was a regular day trip or sometimes week's holiday destination when my brother and I were little. This was the first time since our own daughter was a toddler that we had been back. 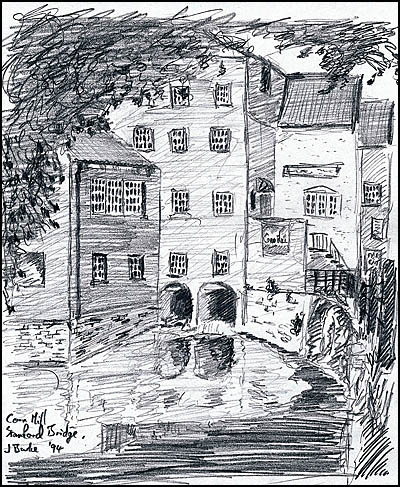 A corn mill at Stamford Bridge drawn during that same week on a run out from Bridlington. It was the site of a massive battle between King Harold Godwinson (Harold II) and the Norwegian Harold Hardrada who ended the day dead with an arrow through his windpipe. It is said he never smiled again... Harold Godwinson's traitorous brother, the Earl Tostig fought on the side of the Vikings and also got what he deserved. Less than three weeks later King Harold II had marched his remaining troops back down to Hastings, picking up extra men on the way to fight a second invading army. This did not end so well for the English. 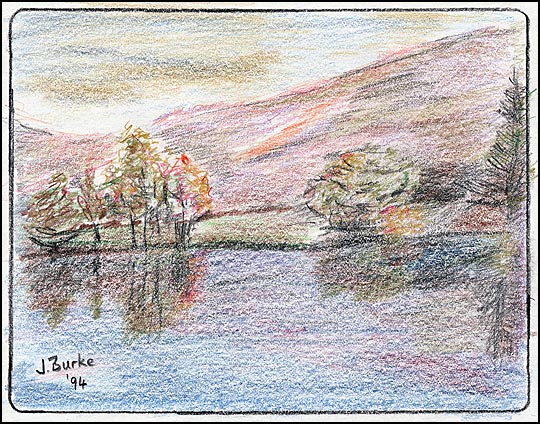 We used to go up to the Lakes a lot during the 1980s and 90s. Now I find it frustrating as it is just one huge traffic jam and so hard to park when you do get somewhere. I'm not even sure which lake this is, though it did start life as a photograph. 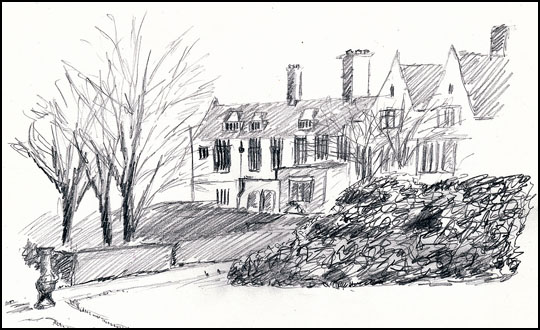 Coombe Lodge was England's Staff College - that is, a college for Further Education college staff. In the grounds, a software company producing software for student record systems had their offices in the old stables. They ran many of their training courses at the staff college and I would regularly be down there on one course or other, or at conferences, or sometimes simply going down to help muck out the team of programmers (sorry Christine!!!) I remember those days with such fondness and made some lasting friends amongst the staff of the old EMIS software company. 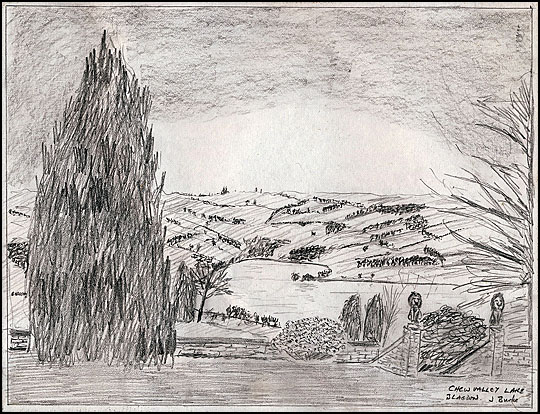 Sometimes the courses would be held at a centre around the corner and up the hill on the other side of Blagdon. At the bottom of the hill was the Chew Valley Lake. I remember going once to meet up with some of the staff of EMIS, sharing information and ideas as a new funding methodology came in for colleges. It was winter and it was the only occasion I can ever recall seeing thunder and lightning with snow. Coming down this hill the following day with a few inches of snow on the ground was … interesting! 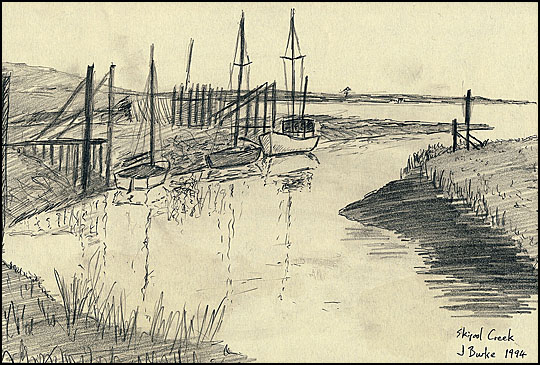 Lastly for this time, this is Skippool Creek near Blackpool. In fact just on the outskirts of Poulton-le-Fylde where we now live. It was once a port for Poulton which still has reminders of those times by way of the village stocks and a whipping post in the town centre.

Return to Sketching and Artwork index
Posted by John Burke at 15:54