Brougham Castle ruins lie around two miles south east of Penrith, next to the River Eamont. The photographs were taken during a visit in 1997 and therefore may not reflect the current physical state of the castle. Likewise, the text may describe access to places not accessible presently due to deterioration and health and safety considerations. 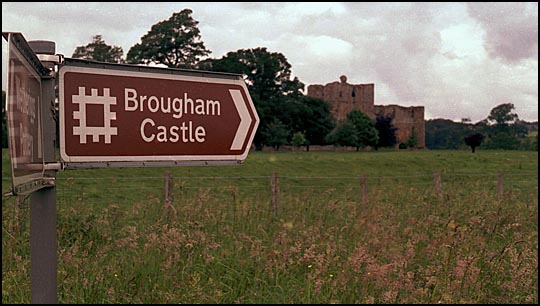 Brougham Castle was one of the strongholds of the north of England against invasion by the Scots. It was built adjacent to the earthworks of the Roman fort Brocavum, seen here and below. 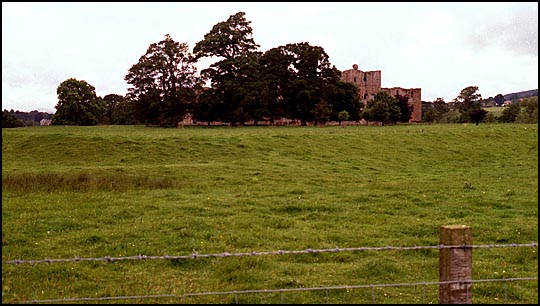 These earthworks, presumably more impressive at the time the castle was built, would have provided a ready made bailey for the Norman castle. A causeway was built from the fort across the castle moat and this would have been the original entrance. 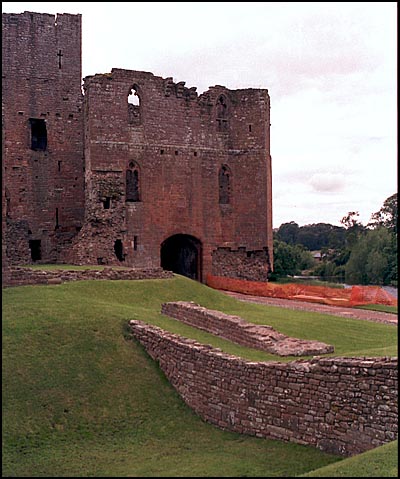 The ditches of the Roman fort may have been re-cut at the time the castle was built. The Roman fort itself covers 4 acres and would have housed around 1000 Auxiliaries (troops recruited from Rome's empire rather than Romans) plus at least a detachment of cavalry. It guarded the river crossing and junction of the road into western Scotland with the trunk road through the Eden Valley and thus over the Pennines to York (Eboracum). A further local road climbed over High Street to Ambleside (Galava). 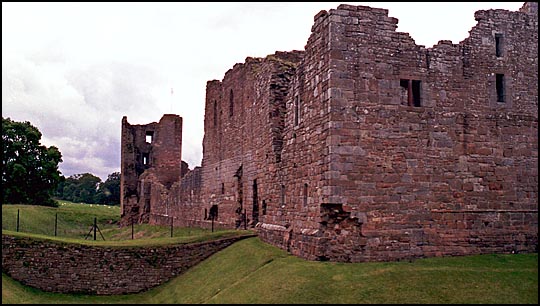 The castle in its earliest form was built by Robert de Vipont (c1203-1228) who built the massive keep and later a large rectangular building (afterwards containing the great chamber) to the east of the keep. Brougham Castle is not mentioned in written records until after de Vipont's death in 1228 upon which the castle passed to the Clifford family along with Brough Castle a little closer to Penrith. They were not the only defensive castles in the area. William II had built Appelby Castle to guard the Eden Valley following his taking Carlisle and north Cumbria from the Scots in 1092. 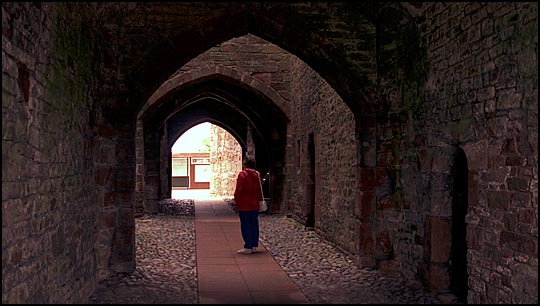 A detailed record, written at the time of the Scottish invasion of 1173-74 tells how William the Lion, captured Appelby easily - suspiciously so - and then went on to take Brough Castle with some difficulty. Once peace was declared Henry II, suspecting the aged constable of Appelby, Gospatric, of sympathy towards the Scots, fined him 500 marks. A mark was a unit of weight and roughly equal to two thirds of a pound. The highest coin denomination at that time would be a penny, 240 of which made a pound. 500 marks (or around 340 pounds) in 1174 would be a fortune. It is fraught with difficulty to try for an exact figure. In terms of simple wealth it would work out at somewhere between 320,000 pounds to half a million. In terms of paying for labour, given the low wages of the time, it would be worth over five million pounds in terms of paying for the same labour today. 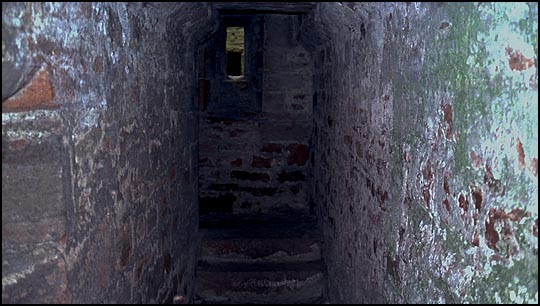 The earlier inner gatehouse had a private staircase from the lord's room on the first floor to the river bank where he could get away or enter unseen by the second, more secret postern door. There was no ground-floor access to this staircase, but its exit was protected by an arrow slit in a small chamber approached by this passage within the thickness of the wall from the inner gatehall. Indeed this route to the arrow slit (plus a second window to the courtyard between the gatehouses which is visible here) is the only function of this passage. The photograph was taken near to the staircase entrance to the passage and it then turns to the left and again back on itself to overlook the postern door. It has two steps just before the right-angle turn to the left and the window ahead. I wonder how many toes have been stubbed against those steps... 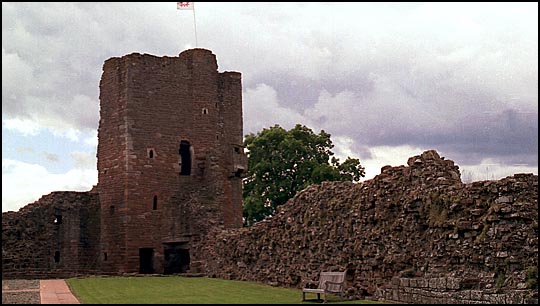 The Tower of League sat between a new domestic range of buildings including lodgings and a chapel and a service range along the western edge of the curtain wall. The tower has four storeys, each having a fireplace and most also having latrines. This is akin to luxury for the period. The tower was built so as to jut out of the corner of the curtain wall and thus commands the ditches both south and west. No trace survives of the service range which occupied the site of the foreground in this photograph. 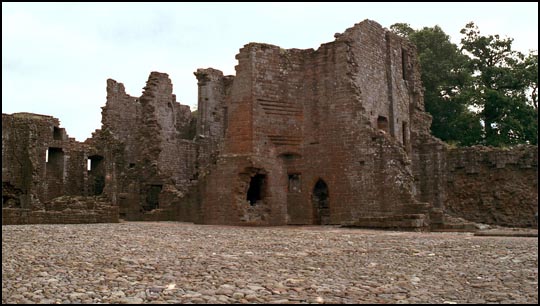 The range to the east of the Tower of League was built to house any extra troops whose presence was necessitated by political urgencies with the Scots which occurred from time to time. The siting of the range kept such troops away from both the Clifford family, who lived in the keep and also away from the main gatehouses which were manned by Clifford family retainers. The range included a chapel and kitchen, both in upper storeys and a courtyard which would have been the original entrance from the Roman fort. 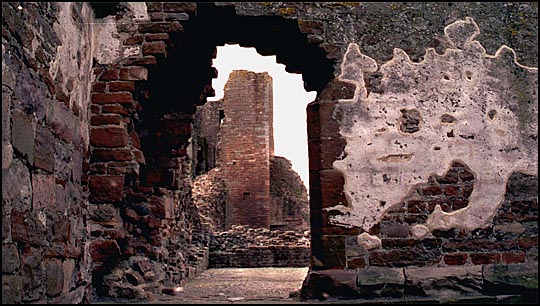 Traces of medieval plaster still adhere to the walls in this range, as seen here, though the range is largely in ruins. 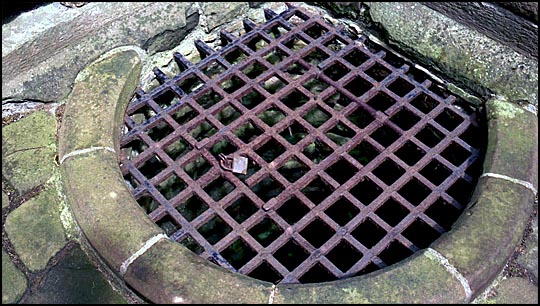 The main castle well can still be seen in the great courtyard, and is situated between the lodgings range and the Tower of League. This second well is in the small courtyard which would have been the original entrance to the castle, opening from the causeway from the Roman fort. A good water supply was essential to castles in the event of a siege. 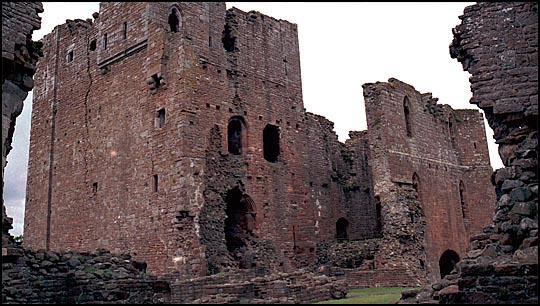 Attached to the keep originally by Robert de Vipont was a great chamber, where the family could dine in private. Now in ruins but for foundations, it was built on the eastern side of the keep. The great chamber is not to be confused with a castle's great hall, where the entire household could dine together. 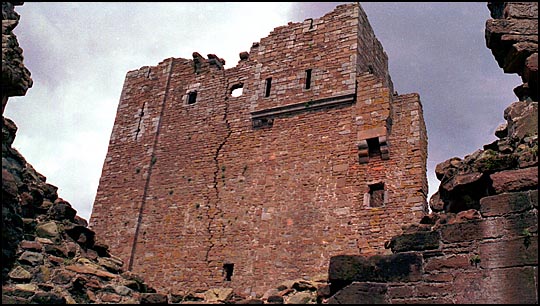 The massive keep dominates the castle from all directions. The entrance is on the same side as the entrance to the outer gatehouse. If enemies managed to get through the dual defences of the outer and inner gatehouse, they then had to get around three sides of the keep in order to reach the entrance, all the while being bombarded by missiles from above. Note the crack down the southern face of the keep. 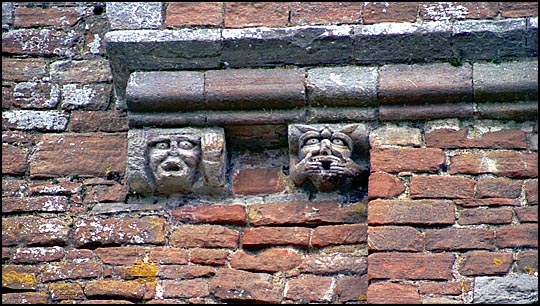 In the previous photograph it can be seen that part of an upper storey is set out from the main surface of the wall, and at the western (left) edge the projection rests on two stone corbels. These are shown in detail here. It is still possible to climb to the top of the keep, via a spiral staircase and wall passages. 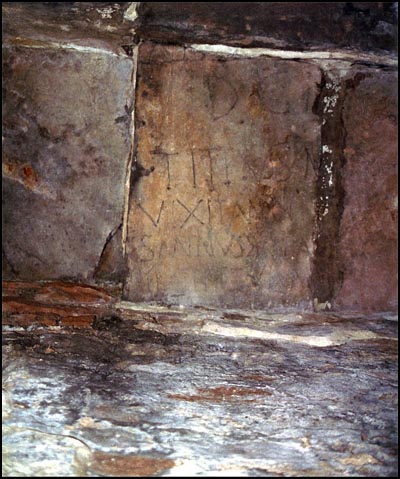 In the roof of a passage in the keep is a reminder of the Roman fort. Part of a tombstone has been used in the ceiling. A notice reads: The Latin may be translated: "To the spirits of the departed; Tittus M [...] lived 32 years more or less. M [...], his brother, set up this inscription." 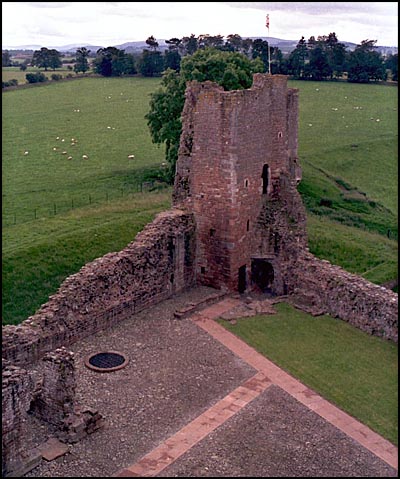 The Tower of League and Castle Well from the Keep. After Robert Clifford's death at Bannockburn the Clifford fortunes were eclipsed and it was his grandson Roger who restored the family prestige and made Brougham Castle once more an effective Border defence. Born in 1333, Roger bore arms as an esquire in Flanders a fortnight before his twelfth birthday and joined several expeditions against the French thereafter. But his main battles were against the Scots. He built the more convenient range of buildings against the east and south curtain walls, all on the first floor and comprising great hall, kitchen and chapel. He also made a covered way from the hall porch to the ground floor of the keep. An inscribed stone above the main entrance to the castle reads: Thys made Roger. 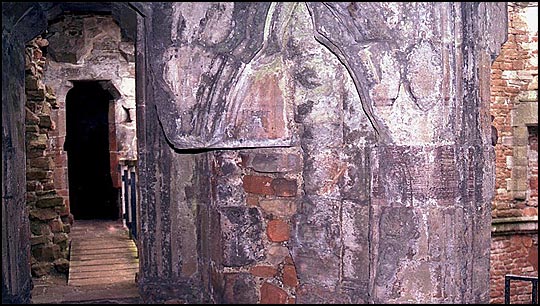 The small private chapel, or oratory, can still be seen on the top floor of the keep. As can be seen from the extreme right, the main flooring of the keep has worn away and been lost, and the keep is open inside from the ground floor to the sky above. The frame of a structure to the extreme right is a fireplace in the opposite corner of the keep. Looking at the right hand side of the pillar there is a fragment of carving in the corner facing us. If you look carefully at the right hand support where the arched hood (presumably of a sedilla - a priest's chair) comes down, about one quarter of the way up from the bottom of the photo there are three designs carved. The middle one, a scallop shell, can still be made out. 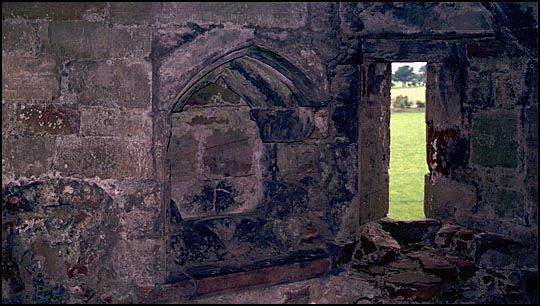 The remains of a piscina - washing bowl for the Communion cup. 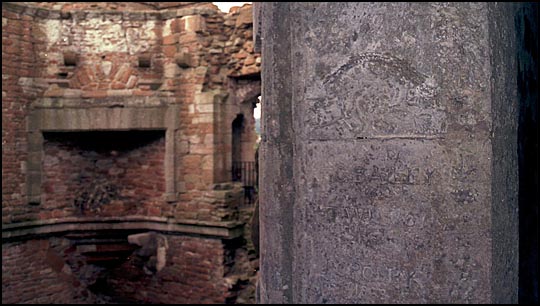 The same fireplace as seen before is in the background but the focus is on an almost totally worn piece of carving with recent names carved with a quality that seems to rule out mere graffiti - G Bailey, an almost vanished T Wi... Wilson or Williams? and finally at the bottom J Crosby and the date 1863. 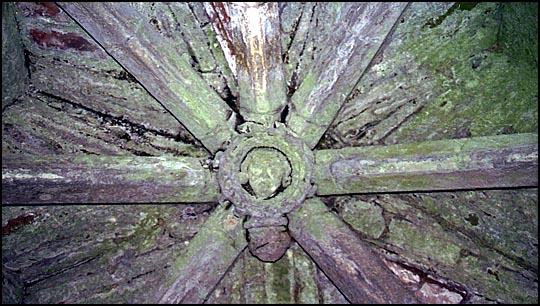 The roof of the oratory has a single boss where the vaults of the roof meet. It has a carved head and face. 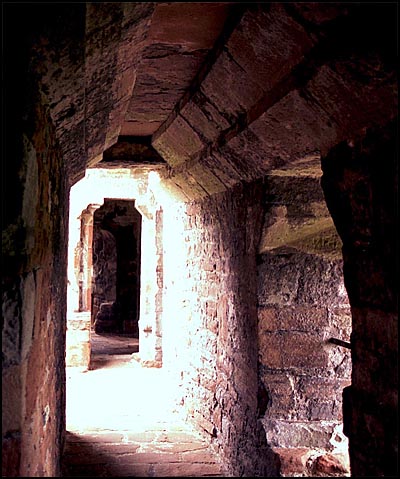 Another wall passage. Brougham Castle was host to King James I in 1617 and later, Charles I in 1629. It badly deteriorated during the Civil War however, being much restored by Lady Anne, the last of the Cliffords, who died in the castle in 1676. Ownership passed to the Earls of Thanet. 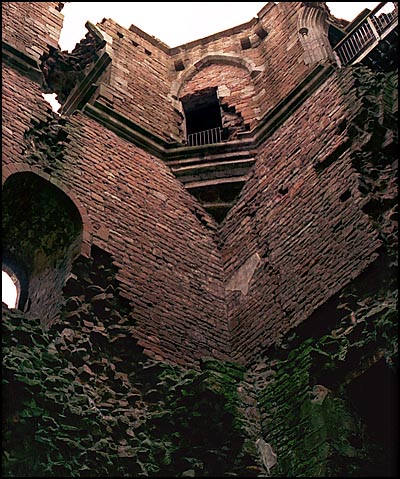 The inside of the Keep. The castle was partly demolished in 1691. In the 20th century the castle was given over to the Office of Works who repaired it and opened it to the public. Since 1984 it has been in the care of English Heritage.