Saturday 10 August 2019. We gathered back at the hotel where the Leger coach was waiting to take us at 3:00pm to the city of Ypres where we would attend the Last Post Ceremony at the city's Menin Gate. 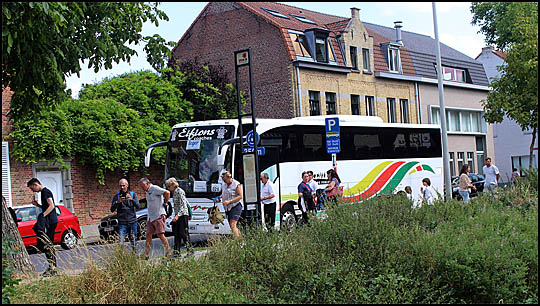 Leger coaches have their own livery but not their own coaches. They use local coach firms from all over and our coach for this weekend was from the Welsh firm of Eifion, based in Anglesey and was in their own livery. Our drivers were Bob and Ray and were invariably cheerful and good fun. 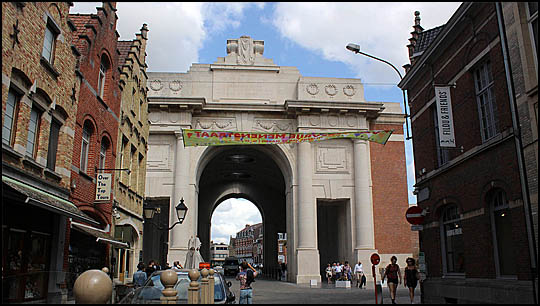 The Menin Gate stands on the route taken by the defending armies of World War One on their way through to the Ypres Salient - an area of intense and unremitting fighting during the war almost from start to finish as it was on the German main planned route to the west. There were three battles of Ypres and this area also saw the battles of Messines and Passchendaele. The area saw the first use of poison gas, both chlorine and mustard gas and the city was totally destroyed by the end of the war and had to be rebuilt from scratch during the 1920s. 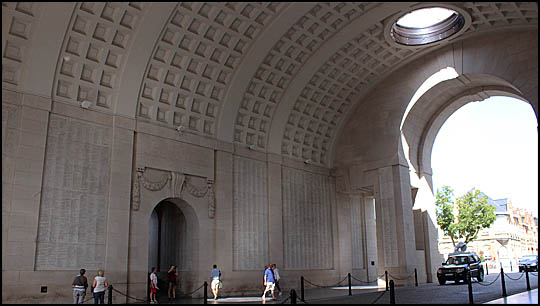 The gate at the time of the war consisted of two lion sculptures on plinths, between which the armies marched. Replicas stand in their place now on the road just before this memorial arch. The originals, though damaged by shellfire, were given to Australia for their war memorial and now stand before it in Canberra where visitors to the Australian Memorial have to pass between them. The replicas were presented back to Ypres by the Australians to mark the centenary of Australia's involvement in Flanders during the First World War.

54,395 names of UK and Commonwealth soldiers are inscribed on the walls of the Menin Gate. These are all of missing soldiers - those whose bodies were never found or were unidentified. It isn't large enough. For a start it does not list the missing soldiers of either New Zealand or Newfoundland. They have their own memorials nearby. And once full, the names of another 34,984 UK missing were added on the Tyne Cot Memorial. 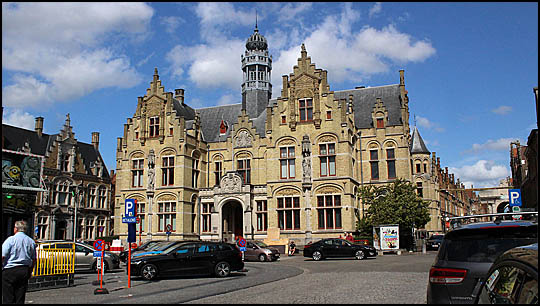 As we enter the large Market Square we pass the Palace of Justice standing facing the square. 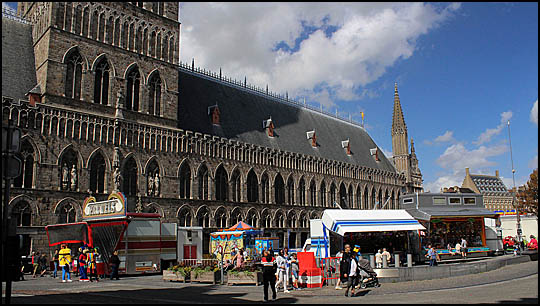 Every building in Ypres was destroyed by five years of almost continuous shellfire. The most important buildings were reconstructed to look as much like the originals as possible, from the 1920s onwards. 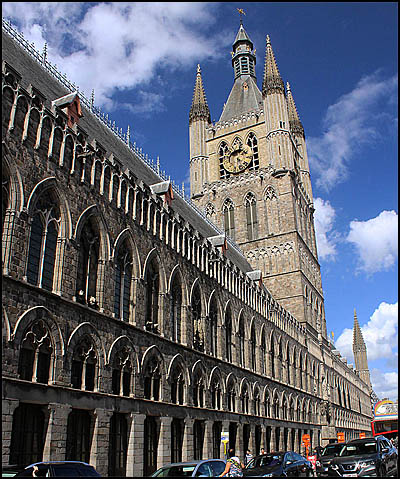 This was the Cloth Hall. The original was built in the 13th century. Its replacement now houses the In Flanders Fields museum. 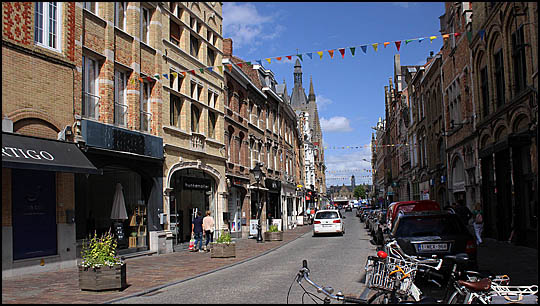 There was a funfair set up in the square. Rides and an amusement arcade catered for the crowds of people still walking through the town at around 5:00pm. We wandered up the side of the square and into the streets beyond, scouring menus of restaurants as we wanted to eat before the ceremony at 8:00pm. 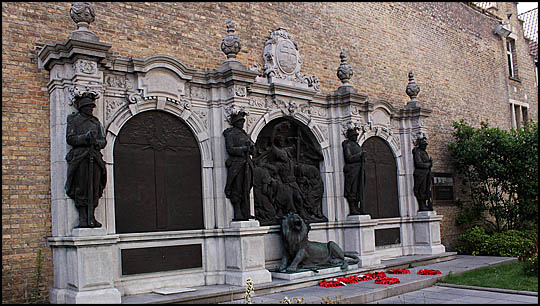 We cut sideways across a full block, knowing this would eventually lead to come back down the other side of the square. It was worth walking that far as we came across this impressive monument, the Ieper Fury. Ieper is the Belgian name, Ypres the French version. The Tommies during the 1914-18 war mainly referred to it as "Wipers"… 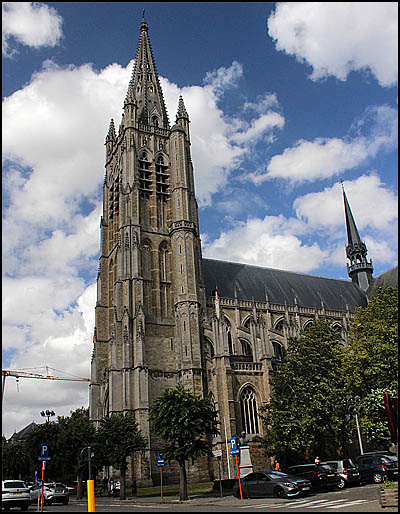 Turning to head back towards the square we came to this church or cathedral. Both, as it turned out. The Church of St Martin was built 1230 to 1370, became a cathedral and seat of the diocese of Ypres in 1561 but then lost its status and reverted to a church in 1801 due to an agreement between Napoleon Bonaparte and Pope Pius VII in which Ypres became incorporated into the diocese of Ghent. Locals still refer to it as a cathedral. 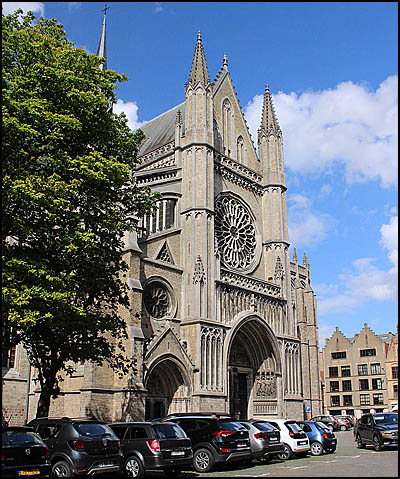 The building was flattened during World War One and rebuilt from the ground up to the original floor plan, though the spire is larger than the pre-war spire. It is a beautiful building and fully deserving of cathedral status. 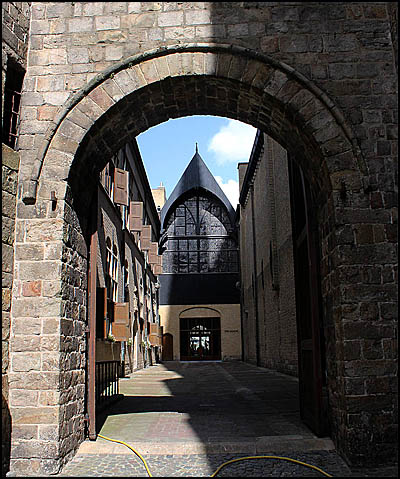 Opposite the church entrance was this archway leading through the Cloth Hall and including the entrance to the In Flanders Fields museum. We walked through and found somewhere to eat. We both had chicken, with a creamy mushroom sauce that was pure delicious. I got extra mushrooms as Fran picked all hers out… 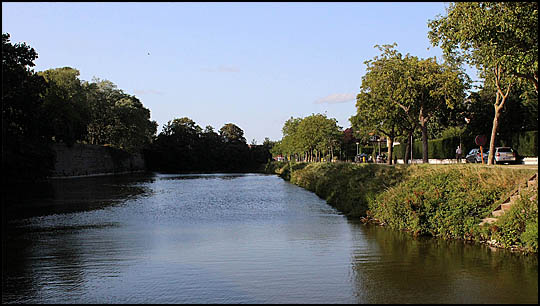 We sat for a while watching people coming and going to the fairground and then wandered back towards the Menin Gate in good time to find a spot to stand. Several people from our coach were gathered together near the spot where wreaths would be carried to be hung on a rack in a recess at the side of the archway. This is the Kasteelgracht - one of three bodies of water remaining of the original moat of the city. The fortified city wall can be seen on the left. 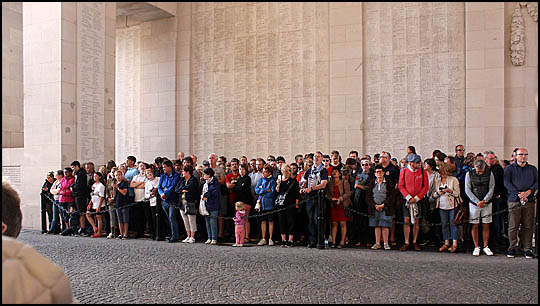 I didn't take any photographs once the ceremony began. Plenty did, in fact it was hard to see sometimes for the number of phones and tablets held up (get a camera, instead of blocking people's view!!!) but I felt that it was not appropriate to take photos. It was a ceremony of remembrance, not an entertainment. But alas the distinction is lost on many people these days. 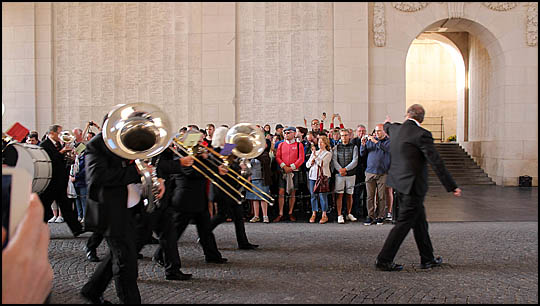 Two bands played briefly during the ceremony. This silver band from Sheffield marched to their place, playing, a quarter hour before the ceremony started. 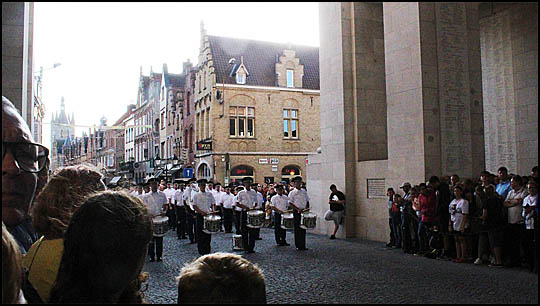 Formed up on the roadway was a fife and drum band from Belfast. The ceremony itself was quite moving for those who sought to identify with its meaning. Certainly I wasn't the only one having to wipe a tear away as the wreaths were laid. The last post itself was sounded by three buglers. Traditionally they come from the local Fire Brigade. Once the ceremony ended we went back to the coach to return to Bruges and our hotel. 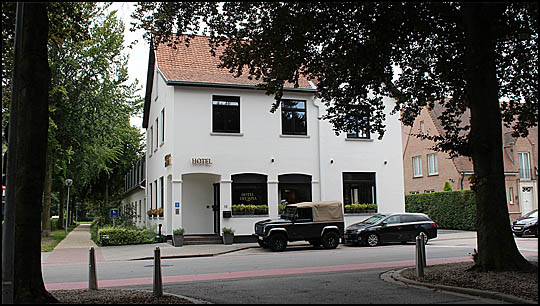 And this is it - the Hotel Olympia. 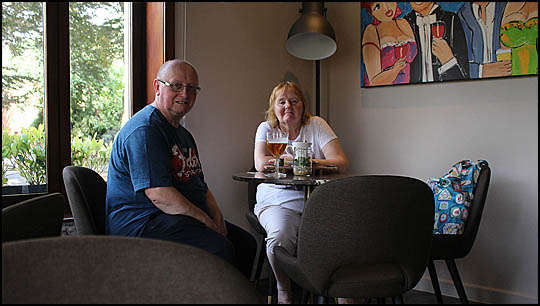 We were still trying to catch up on sleep after having been awake from 7:00am on Thursday right through to about 10:00pm on Friday - 39 hours! Besides, Miss Franny's wrist gizmo was saying we had walked 14,000 steps that day already so we weren't about to go out to top it up any more! 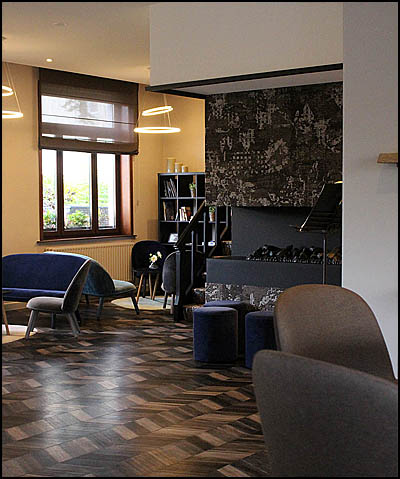 We had a drink in the bar and headed up the stairs to our first floor room. Second floor to the Belgians - they call the ground floor the first floor... 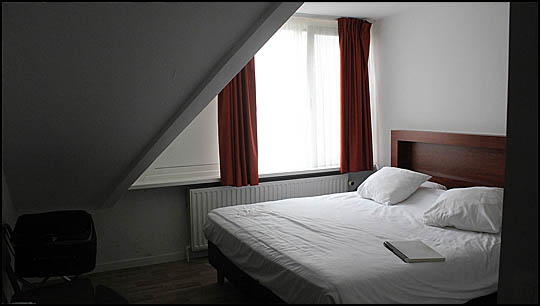 Guess which side of the bed I was allocated...? We went to bed. BANG! Ouch... I had been in the bar, so needed to get up agai… BANG! Ooooohhh…

Return to the Beautiful Bruges and Ghent index page
Posted by John Burke at 17:15