Saturday 10 August 2019. We wake in the Belgian city of Bruges, having decided at fairly last minute to take a coach trip - something we haven't done since 2002. Our trip is with our old favourite firm, Leger and the tour is called Beautiful Bruges and Ghent. 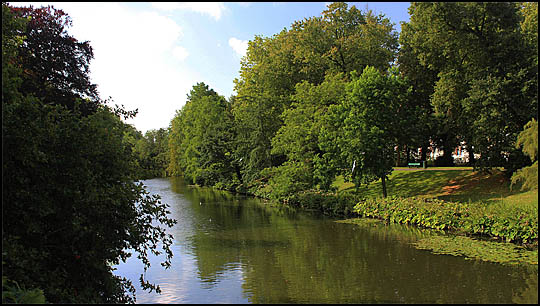 Our hotel is the Hotel Olympia on Magdalenastraat. It takes a walk of around 20 minutes to get into the town centre and the walk takes us through pleasant mainly shopping streets until we come to the city centre itself by crossing the River Vesten, seen here. 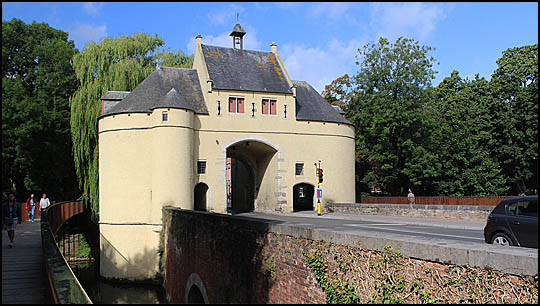 We cross on a footbridge passing next to the Smedenpoort, one of the original city gateways which was rebuilt in 1368. 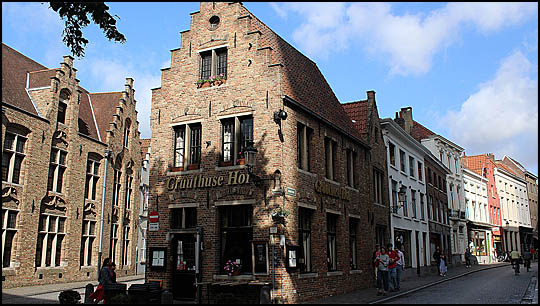 We had gone into the town in search of food on the Friday night, but I hadn't taken my camera then. A shame as it was the best visit weather-wise. So some of these shots will be in sunshine and some won't! And a few... will be in rain... 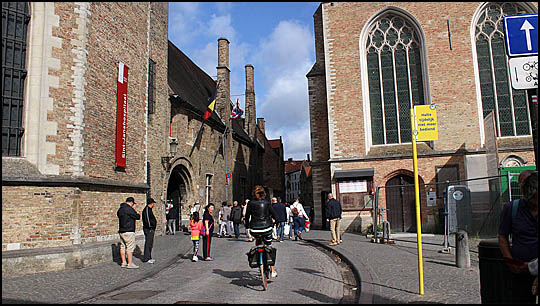 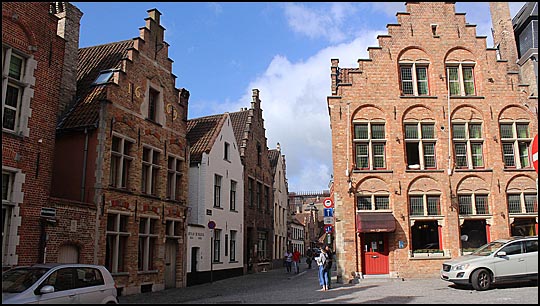 Bruges is a UNESCO World Heritage site. It has kept the majority of its medieval buildings and many other old buildings. Many of them have these stepped gables. The white building just left of centre was founded as a hospice for widows in 1456 by J. De Blieck and enlarged in 1631 by O. Reylof. It is one of some 40 charitable hospices surviving in Bruges from that time. 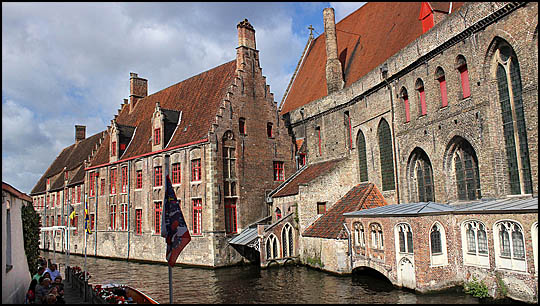 The canals of Bruges have led to it being called The Venice of the North, but it has a quite different character to that Italian city. However what it does have in common with Venice is the lift to your feelings as you come to a bridge and spy the water, perhaps a boat travelling along, or picking up or unloading passengers. There are several points at which you can take to the water. 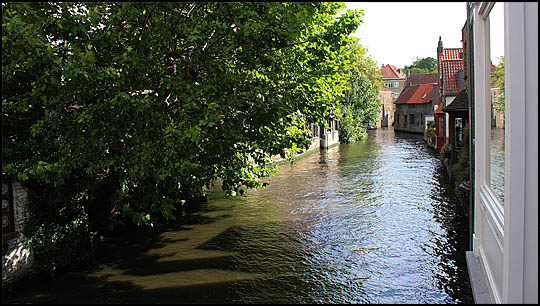 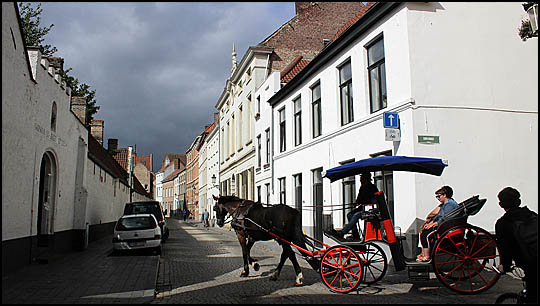 Another way to get about for the sightseer is the horse-drawn carriage. As far as I could make out these started at the Market Square. On the left is Godshuis St Jozef, another hospice founded in the late 17th century but in another location. It moved to these premises in 1905. In fact, we had taken it to be a nunnery. Not sure why, other than some vague memory that Audrey Hepburn's film The Nun's Story was set here, or filmed here, or something... I'm rambling... 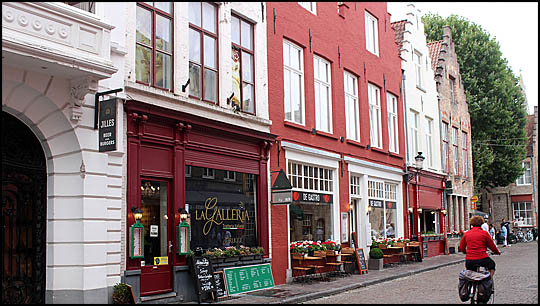 There is little chance of going hungry in Bruges. Restaurants of all types can be found. There is also a McDonalds and a Burger King, but sadly not a Wimpy… We did in fact eat in McDonalds on the Friday night, but only because we were way past our time for eating and being diabetic, need to keep to a fairly rigid timetable for taking tablets etc. We arrived in time to hear an incredulous customer ranting at the poor girl serving him. Apparently he was astounded at having to pay more to eat inside than he would for a take-away. Never eaten before in a restaurant or café perhaps... 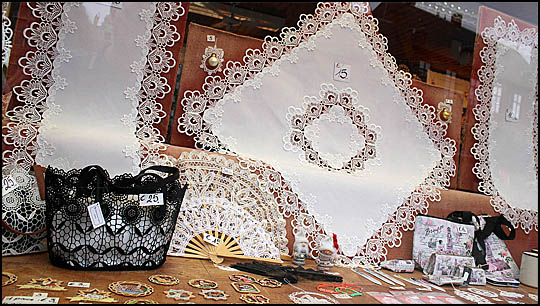 There are several types of shop that you will see lots of. We'll come to some of the others but Belgian Lace is a case in point. We found lots of tapestry and cross-stitch shops too, though not necessarily at bargain basement prices. Fran was fancying a cross-stitch pattern of Bruges at night. About 10x8 inches (25x20.5cm) it turned out to be £76 euros. Admittedly it had the silks provided, but so do Hobbycraft at about half the price. 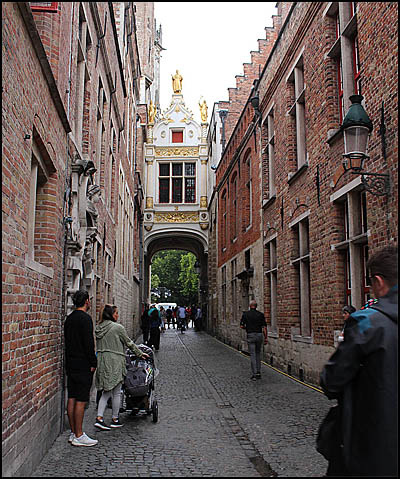 We passed over the Dijver Canal onto this narrow street-cum-alley resplendent with the name of Blinde-Ezelstraat. Halfway along it we pass under a room that joins the City Hall (left) to a rather splendid building of 1534-1537, seen in greater detail below. 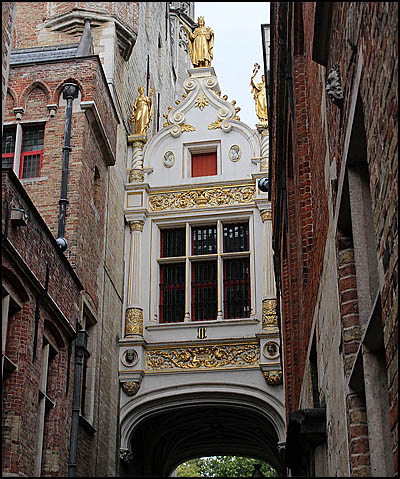 This building was a castellanry, the office of a castellan or appointed governor of a court or castle. In this case it was a court of law - castellan being the root of our English term of governor in the context of a prison. 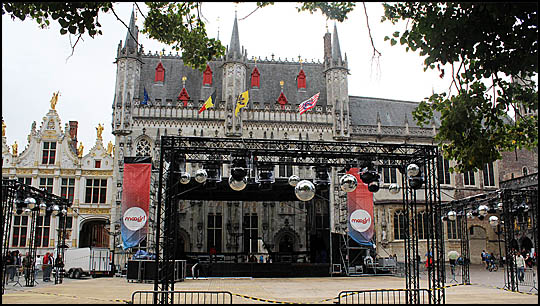 Passing through the archway to Burg Square you can see the court house on the left. Centre and right behind the stage is the City Hall. Building work took 45 years and was completed in 1421. The stage was one of several we saw. There seemed to be a few festivals going on that weekend all of which we managed to miss. Status Quo, Wet Wet Wet, and Marc Almond, amongst others, were competing against some sort of DJ invasion of (dare I say) more modern music (I use the term loosely). 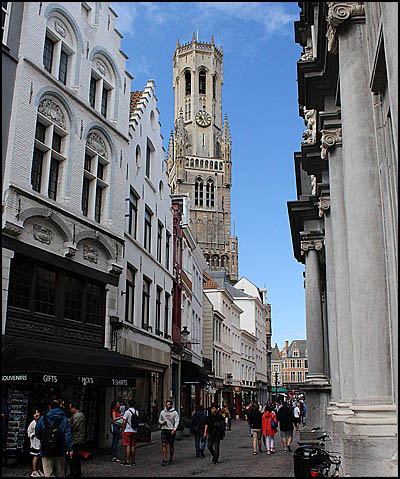 The Belfry of Bruges is a 272 feet high affair which leans a little to the east. Eighty seven centimetres in fact - almost 3 feet... It was built around the year 1240, rebuilt in 1280 after it burned down and the octagonal top stage was added 1483-87 with a spire which burned down after a lightning strike only six years later. It was rebuilt but burned down once again in 1741 upon which the city burghers thought "burgher it..." and added a small parapet instead to stop people falling off. It has a carillon of 47 bells. The carillon of bells was first added in the 1500s and after the city folk held their hands over their ears for a while, a professional carilloneur was employed to play them in 1604. A carillon is played by striking, with the bottom of the fists, pegs arranged like the keys of a piano. 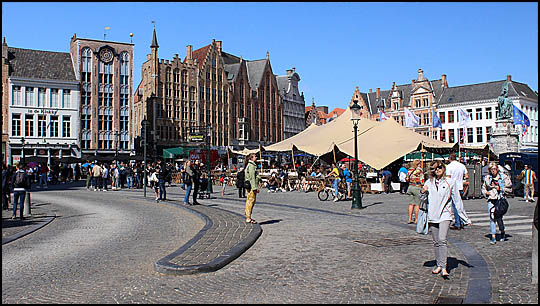 The Market Square is called Markt. It is here you can catch a horse-drawn carriage ride or a little open-topped minibus if that's your thing. On one side is the impressive West Flanders Provincial Court, on another side the Belfry flanked by the old market hall. On the other two sides are businesses and shops with a large selection of restaurants with outdoor and indoor seating. An obelisk and statue stand on a plinth and the whole space was covered with staging, lighting (in the process of being blown over by the wind) and a large beer tent. 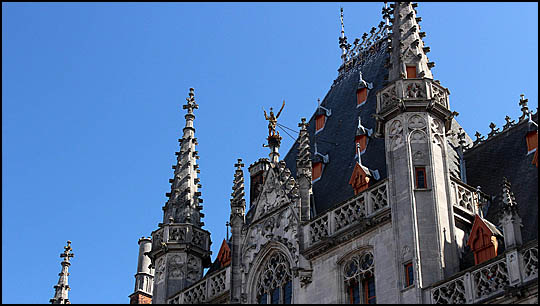 The ornate roof of the Provincial Court building. 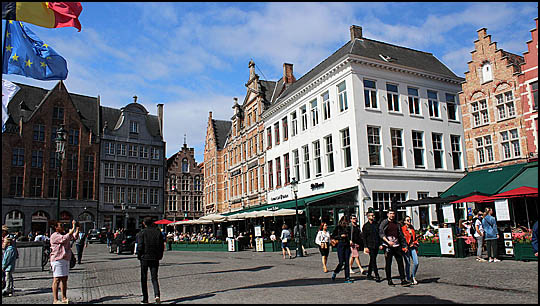 Just some of the restaurants ranged along the perimeter of the Markt. 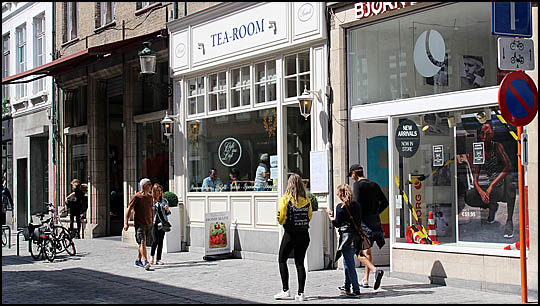 Whilst in Belgium, you have to try a Belgian waffle. Made with the same sort of batter as a pancake but moulded by a waffle iron into a slab with a series of square indentations which once cooked can hold jam, cream, ice cream, you name it... We went into this place and after studying the menu ordered a waffle Mikado each. That had two scoops of vanilla ice cream and hot Belgian chocolate sauce. It was so scrummy I forgot myself and ate it before I could take a picture. Study a menu - we had the same thing the day after in Ghent and it had only one scoop but added fresh cream. A chap next to me was coveting mine and ordered what he thought was the same but mis-ordered and got no chocolate sauce. He looked most discomforted... 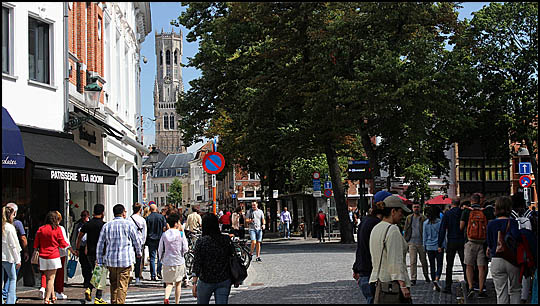 We went down one street, cut off to another and then yet again swerved under Miss Franny's instruction to find ourselves once again heading for the Belfry... We turned round. It was time to return to the hotel as we were to go out in the coach again that afternoon to visit Ypres, where we will attend the daily Last Post Ceremony to the lost and fallen of World War One at the Menin Gate.

Return to the Beautiful Bruges and Ghent index page
Posted by John Burke at 14:46