Another look at my sketches of places around England over the years. Most of these were done plein air, on site. 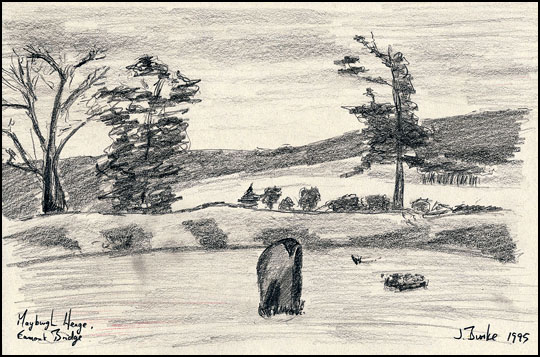 Mayburgh Henge near Penrith. The earthworks are visible from the M6 motorway, just before the north-bound Penrith turn-off, but to see it in all it's glory you must drive to the village of Eamont Bridge and climb the earthworks to see the last remaining stone of a group of four. The other three are somewhere beneath your feet. A magical and inspiring place and one of personal significance for me. It also (stand-by for shameless advertising ploy) appears in my novel King and King To Be available on Kindle or Kindle App at very reasonable price. If you live outside the UK, just change the .co.uk of the link to your own Amazon local domain. 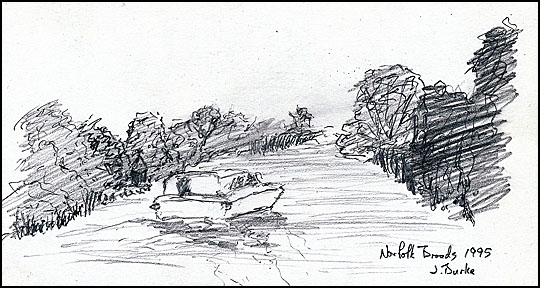 One day whilst on holiday in Great Yarmouth, we hired a boat on the Norfolk Broads for the day. Sketching from a moving boat requires a certain speed of drawing as the scenery is changing all the time. Therefore sketches done that day are more fluid and have much less detail and are rather small! 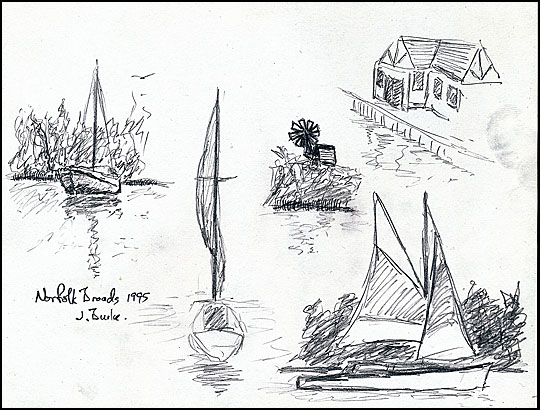 Some are so small that there are several of them on a single A5 sketchpad sheet! 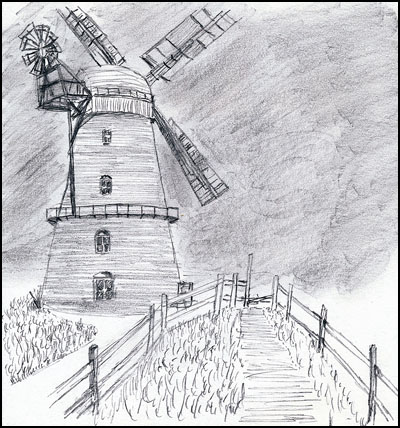 We stopped here and got off the boat for a bit. Whilst the other had a look round the windmill I had a sketching session all on my own under the sun - very pleasant! This is the Berney Arms Windmill on the River Yare. 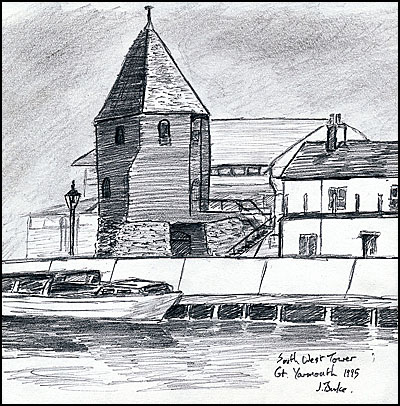 Great Yarmouth was a walled town in the 13th century and parts of the walls still exist. This is the South East tower seen looking east from beyond the River Yare. The tower is made of brick but the walls were either made or faced with duckstones - large pebbles from the beach. The name duckstone comes from the shape of the stone which resembles the body of a duck. 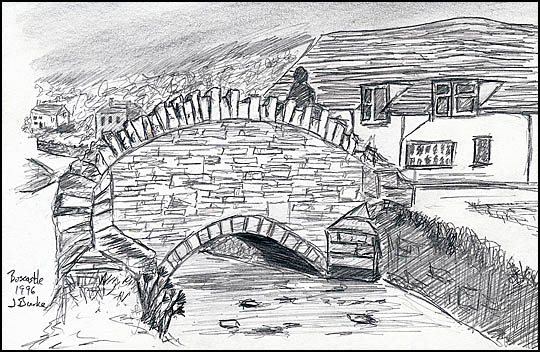 Boscastle, 1996. The old bridge was sadly washed away in the famous flood in 2004. That week in Cornwall I drew the bridge over the stream and in the shop I saw the first and only computer of the week, but it was only connected to a local network giving tourist information. Cyber cafes had definitely not made it to Cornwall in 1996! 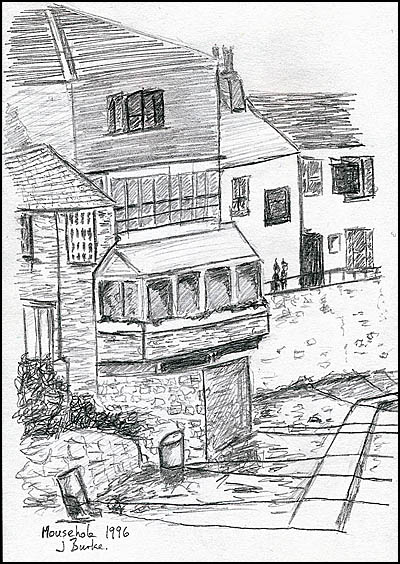 The village of Mousehole (pronounced Mouzel) in southern Cornwall. I sat on a bench next to a sleeping black cat and did a sketch of the harbour. On the next bench a man was painting designs on round stones in water colours, presumably to sell as paper weights. I got sunburnt a bit on the back of my neck! 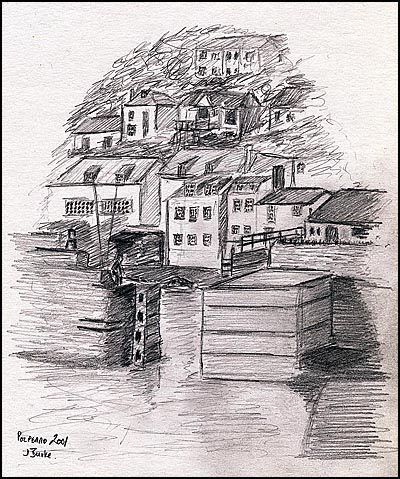 Some six years later, back in Cornwall in 2001. We hardly ever spent a week there without visiting the artists' No.1 destination: Polperro. The weather was warm and sunny and sitting with the sketch book seemed a good idea! The harbour entrance has a stack of huge square concrete blocks which may look improbable on the drawing but it is accurate, honest! Well... if I'm honest there are five of them, not four... Mum! Look at what that man's drawing! He's only drawn four blocks! Mum! Tell him!" 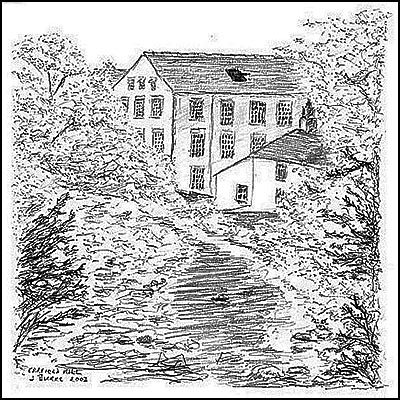 Farfield Mill in Sedbergh. A friend was involved in saving it by setting it up as an arts and craft place. This is from a very small scan from a very early scanner and I don't have the original to scan again. I must go and do another one day! Apart from some wonderful artists who have stalls there, the scenery in the immediate vicinity is wonderful! 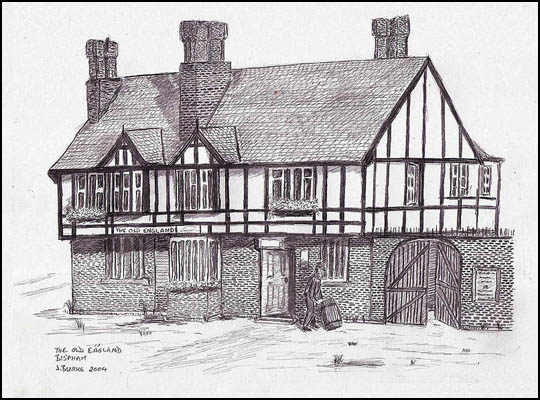 A commission with the broad brief of something recognisably Bispham (a village just north of Blackpool) this is the village centre pub with a bit of artistic license to suggest an age that probably pre-dates the pub itself... This was the most detailed sketch I had done at the time and I spent many hours on it, including a few nights working in hotel rooms as I travelled about the country for work! 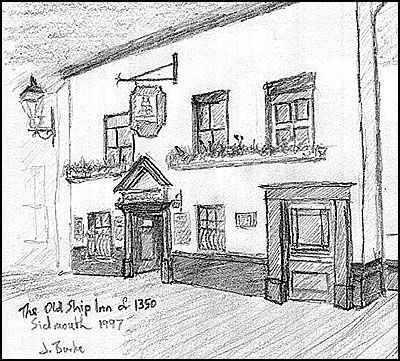 The old Ship Inn in Sidmouth, drawn in a rush one late afternoon whilst the rest of the family was buying every last bit of stock from the local butcher, prior to the most ginormous bar-b-que back at our campsite. We were drunk before cooking started as it took so long to get the blooming thing lit that we had gone through several bottles of wine and had hamburgers from the calor gas stove. Around midnight we stopped eating, carried on drinking and spent the rest of the holiday laughing and rolling around on our distended stomachs in front of the tents... The last time I went to Sidmouth the pub had been closed and the place was now a Costa Coffee... 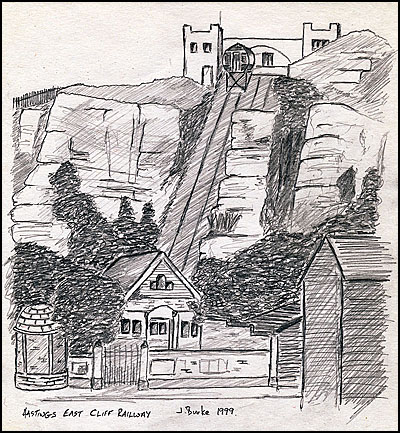 Another week's holiday based in Hastings on the south coast led to me drawing the funicular East Cliff Railway. The rest of the family had gone off for a game of putting nearby so I was able to spend a bit of time drawing.

One or two of the sketches here may be repeated from a previous article, which was written before I started a time-based record of all my sketches...

Return to Sketching and Art Index
Posted by John Burke at 14:32