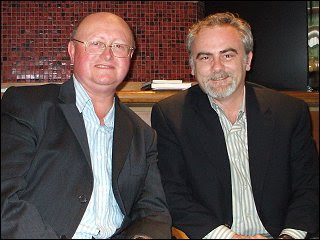 I was talking to the two ladies featured on the previous post when a familiar figure thrust a hand out to shake mine and said "Is it John?"

It was the American actor and director Mark Redfield, one of whose latest and current projects is a film called "The Tell-Tale Heart" which I have mentioned before as it stars Ingrid Pitt, pairing this great horror film actress with none other than Count Yorga himself, Robert Quarry.

Whilst we had only ever met online before, we were soon happily engrossed in a conversation about the new movie which is set in the dark times just after America's Civil War. Ingrid is set to head off to America for filming in October, then she has a very important birthday coming up. It sounds like there will be lots of famous people at that party! Then it's back to the USA for a bit more work on the film and with fingers crossed we should be able to watch it some time next year!