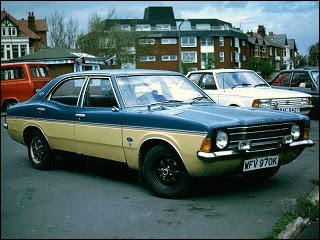 Still sorting through several thousand old photographic negatives and came across this one.

This was my 1972 MkIII Ford Cortina, bought second-hand in 1985 for a mere £250 when I was working at my first college, the Nautical College in Fleetwood.

The photograph was taken shortly after I bought the car, which had been resprayed in these colours which were then current Ford colours. The colour scheme made the car unique and everyone who knew me would pip their horn and wave as we passed them.

We'd park it somewhere and come back to find notes under the windscreen saying "Hello John, missed you but found the car!"

It was one of the best cars I've ever had. Even MOT mechanics would drool over it whilst tapping the sills energetically to see if they caved in.

It was a trifle under-powered though as it was the 1300cc basic model and sadly this contributed to it being written off in a collision some three years later.