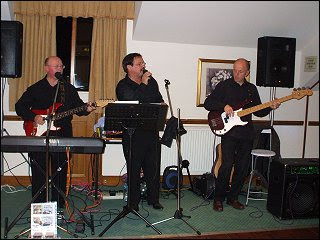 Creeping Bentgrass were out at Garstang Golf Club last night, playing for a Golden Wedding party.

It all went down very well, though I had a couple of small mishaps - the keyboard refused to work at one point and it was one of those songs where I play a guitar intro first so we had to play the entire song without any help from the keyboard so no drums or backing fill, but no worries!

Thankfully the keyboard worked after pretending it was a Spectrum ZX and switching it off and on again! Then the guitar went silent until I fiddled with the cable at the guitar end. That cable has now been ditched!

And after all that I started to play the intro for I Will Love You on the keyboard and totally forgot the tune. The old befuddled mind went blank and I busked a fairly nondescript but compatable intro, trying to ignore David killing himself next to me whispering between the laughter "You've forgotten the tune haven't you?" I remembered it once he started singing the first verse...!

If we didn't make mistakes, how would you know it was live? Ha ha! Anyway I don't think anyone else noticed apart from us.
Posted by John Burke at 19:17