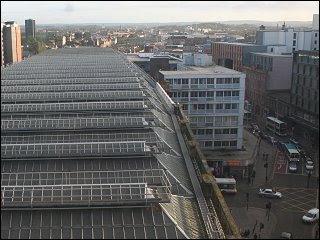 As the new academic year starts, I'm back travelling the roads and rail networks of Britain again.

Tonight I'm in Glasgow, overlooking Glasgow Central Station - not an imposing view as these things go, but the double glazing is doing a good job of keeping the noise out!

Tomorrow Clive and I are delivering one of JISC infoNet's Project Management workshops to an audience of librarians. It's a while since we saw each other actually and at the moment he's still negotiating the M8 so who knows where he might end up.

My satellite navigation system needs a serious talking to, as it has a totally different idea than do Glasgow's city planners as to where the one-way streets are or which way you drive down them. It would have had me down three bus-and-taxi-only streets had I stuck to it rigidly...
Posted by John Burke at 18:13