The delectable, ever-sexy and kind-hearted Miss Franny (I think I got in all the things she told me to...) was in the local newspaper last night. 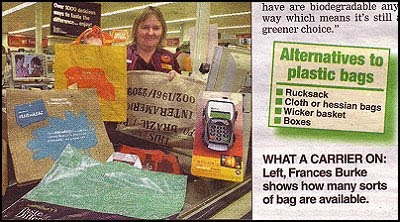 No, she hadn't created a rumpus in the chippy or been dragged off by the police for staggering around the village centre, swearing and swigging lager from cans, throwing her empties at passers-by, although it can only be a matter of time...

Instead she was shown displaying a number of alternatives to plastic bags as Blackpool has "declared war" on plastic carrier bags. A shame the photographer failed to spot that she was holding one of them upside down, but not to worry!

In the battle against plastic the weapons on display include cardboard bottle carriers, hessian bags and ... er... plastic carriers... Oh! They are the re-usable type Miss Franny assures me. Would it not be easier if shops just bought paper bags like we had in the 50s and 60s and like in modern day America? 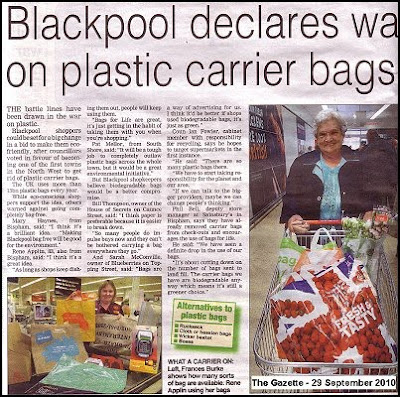 And why has nobody the guts to declare war on the real bane of every shopper whether bothered about being green or not - the blister pack!!! You need a pneumatic drill to open those things and they are always several feet long and wide even to hold a toothpick! Put a tax on the suppliers and manufacturers and importers though - not on the public who don't have a choice... Or just ban the bloody things! I'd be quite happy to buy my razor in a carboard box or even a paper bag!
Posted by John Burke at 08:26