Sunday, 22 August 2010. It's our last port of call. We wake up in Rhodes, moored against the dock and having decided that we are just going to walk off the ship and into the city which is so close to the harbour that even a bus isn't needed. 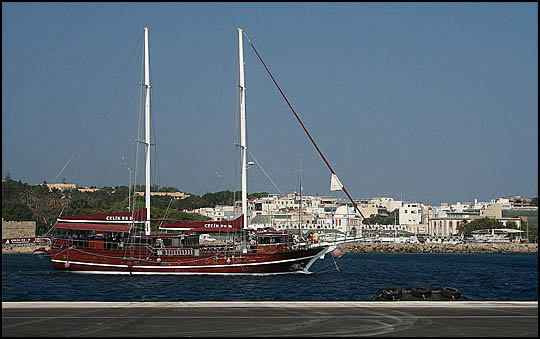 Rhodes Harbour. It was here (well... just around the corner to the right...) that another of the Seven Wonders, the Colossus of Rhodes was built, a huge bronze statue straddling the harbour. An earthquake destroyed it and lumps of it then littered the place for 700 years until it was sold for scrap and taken away on the backs of 400 camels. 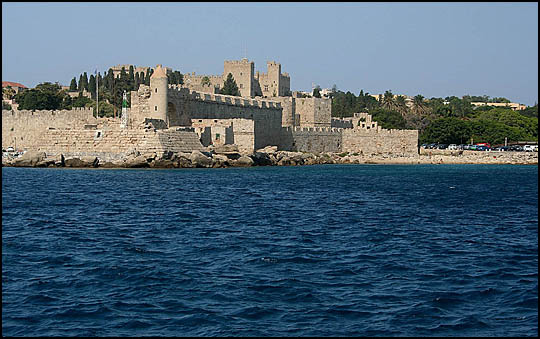 St Paul visited Rhodes once he started his travels and there is a gateway into this fort that bears his name and that he was supposed to enter the city by. 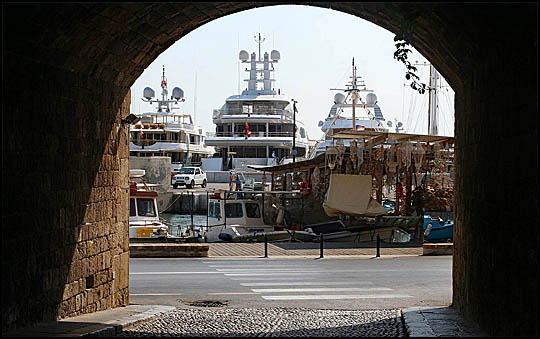 This photo was taken from just inside the city walls and you can see how close the marina is. The harbour is not much further away. The city was well defended, having been fortified by the Knights Hospitallers after they were driven from Jerusalem. This medieval city is well worth exploring. But of course we are exploring the shops... 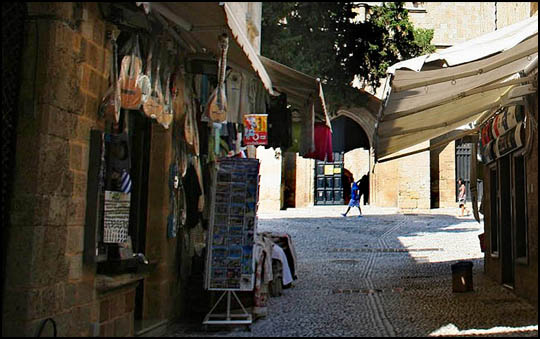 Hey hey! I've found one that's worth looking inside! Fran can't believe it and for a while walks up and down outside, with her head in her hands whilst I am inside buying a few guitar picks just in case I get another chance of a spot in the Horizons Bar! 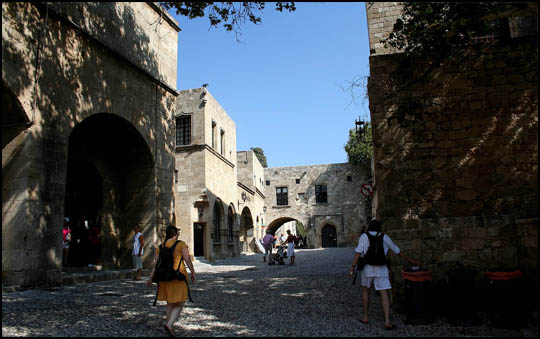 There are just so many brilliant sights in Rhodes that I can only cherry pick here. There are bars-cum-restaurants every second doorway and walking along is to accept a constant barrage of "Drink? Beer? Coffee?" even though they have just watched you turn down their neighbours. One was particularly insistant. "You say 'no' to Georges?" he said to Fran, "you say 'no' to Georges?!?" he can't seem to believe it. "Say 'no' just one more time!"
"No!!!!!!" says Fran forcefully. He gives up. Well she frightened me, never mind him... 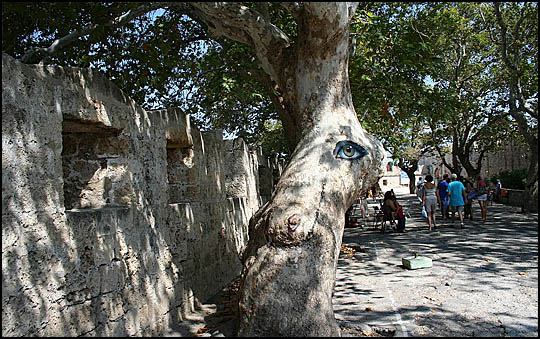 Up at the top of the hill we came across a number of painted trees. This was quite clever, taking the unique shape of the tree and building on it. Another one had a cat chasing a mouse down the trunk. 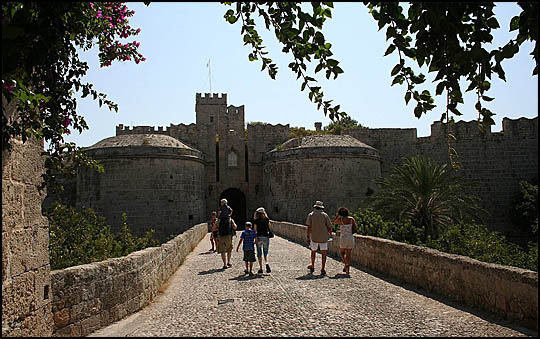 The fortifications are evident everywhere. It as though the entire city is the fortress and certainly the Knights Hospitallers were able to withstand several invasion attempts and sieges. 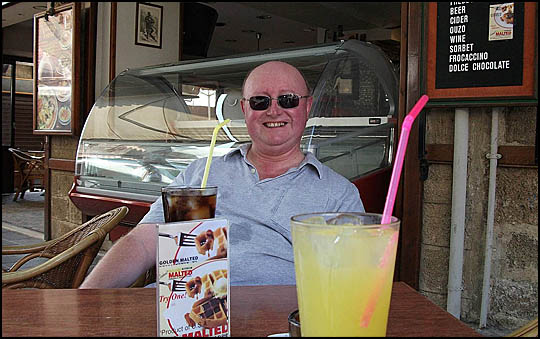 It was hot. We went back down the hill and stopped for a drink at the same bar we had used on a previous visit. Just sitting with a long drink and watching people was entertainment enough! We had walked several miles and after the drink walked a few more before returning to almost the same table and flopping for a second time. 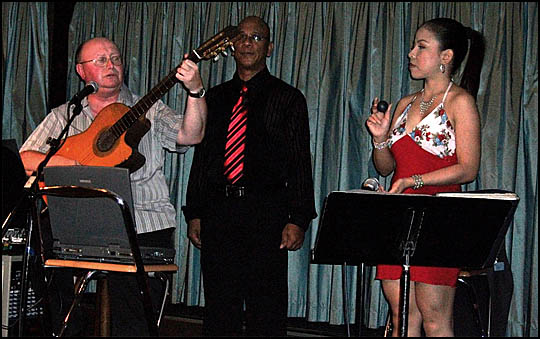 Later in the Horizon Bar I was glad to have found the music shop as Tomas and Maris very generously invited me up on stage again. So whilst others were going home with new clothes, trinkets and souvenirs, I brought back half a dozen Greek guitar picks! 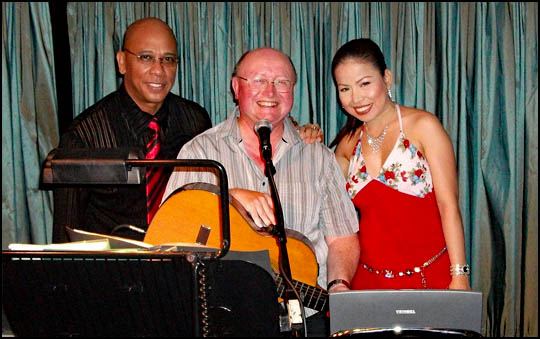 I played Joe Brown's Picture of You at the end of one of Tomas and Maris's 6 sets for the night and we sat afterwards chatting with them until it was time for them to go on again.

The week had started with a generator fault. At 11:30pm when we were well out at sea, Tomas and Maris were halfway through a song when the sound and all the lights went out. The emergency lighting came on after a brief moment and then after about ten minutes waiting Tomas and Maris carried on singing without the aid of any amplification and accompanied with just the guitar. Then the intercom bell sounded the code for a Captain's announcement and his voice came over the speakers: "Good evening ladies and gentlemen. As you may have noticed..."

A generator, the same or another, had hiccupped and as a result all the earth breaker switches onboard had tripped. It would take a full hour to reset them all with the air conditioning taking precedence. Tomas and Maris played a brilliant set acoustically and then an officer appeared to reset the switch and bring the sound system online. I wondered how the Captain had made the announcement but Tomas explained that there were both 240 and 110 volt circuits onboard and whilst they were using one circuit, the main intercom was on the other. Only the one had blown.

With all systems restored and only a short distance to sail back to Marmaris, we put aside hopes of an enforced extra day's holiday! So tomorrow will see us back on a flight to England and rain!