We were incredibly lucky as kids in that Grandad had a car and then later Dad got one as well. That meant that trips out were perhaps a bit more frequent and to far-off glamourous places like Blackpool! Holidays for many still meant working but someplace different - strawberry picking or hop picking on farms. There were more Bank Holidays then, but some of them were religious holidays and even those of us not involved would turn out in our best clothes to watch as the procession went by. 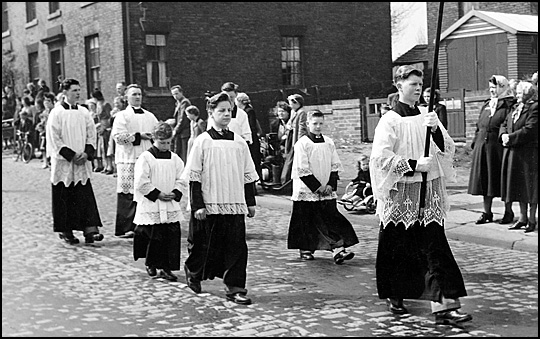 Whitsuntide was one such. On Whit Friday there was a carnival parade and we would all go to the "Whit Friday Field" which was just "a field" for the rest of the year. On Whit Friday, however, it was packed - and I do mean "packed" - with families, eating sandwiches from waxed paper parcels and drinking tea from flasks. The kids would have lemonade or my favourite, dandelion and burdock. Packets of crisps with a twist of blue paper containing a small measure of salt which you poured over the crisps and then shook them up - "Oh no! Hold the bag SHUT!!!" Many years after, in the days of "ready salted" crisps - yes, that's where it comes from - they tried to bring back the nostalgia of those days by bringing out "Salt & Shake", though the salt now came in blue paper packets which had to be torn open. Ha! Just plain sissy! Then a game of catch or football with Dad. On Whit Sunday the churches all walked - the Whit Walks or Procession of churches and Boys' Brigades, with a band if we were lucky. If we were unlucky we just got lots of morose looking choirboys and two people holding up a huge flag on poles, struggling in high winds whilst rows of children to the front and back held streamers attached to the tops of the poles. 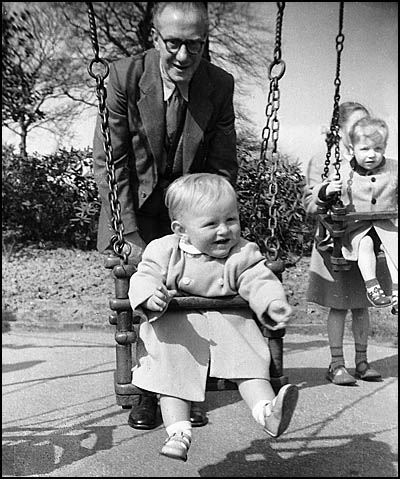 Visits to the park were common. Here my Grandad is pushing me on the swings. There seemed to be lots of small parks - I suppose most of them still exist really! It was a treat to go to the "big" park, which for us was Springfield Park on the road between Rochdale and Heywood. It had a large duckpond and a putting green and a miniature train that you could have rides on! Most parks had swings, roundabouts and a slide. Some had huge witches hat roundabouts, shaped like a cone that swung sideways as well as going round. You stood on a giant ring at the bottom and held on to the rods which made the side of the cone. 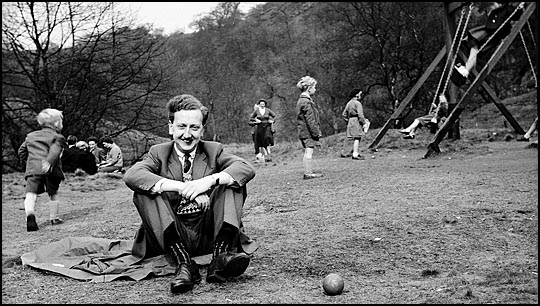 There were gardens, sometimes a small forest and grassy areas where families would sit for picnics or couples would lie to smooch. We'd make for grassed hills to play at lying down and rolling down the hill, covering ourselves in grass stains, ants and mud from the mucky patch at the bottom... This activity was normally undergone just after drinking orange squash and after a while we would feel sick and have to stop...

During school holidays we would go round to friends' houses, sometimes disappearing for the day. We had to tell Mum where we were going but apart from her knowing where that was and walking there herself, she had no way of getting in touch with us. No mobile phones, not very many houses with phones come to that, and certainly no computers and emails! During holidays when we were at junior school we would often be round at Alan Telford's house. He lived next door to a classmate of Frank's called Kenneth Clegg if I remember rightly. They had rigged a two-way radio link between their bedrooms with a toy electronics kit and a wire thrown from one window to the other! It had started out of course as two baked bean tins joined with string. This really worked and was a staple piece of kit for spy games!

We played football and cricket in the street. Grown ups didn't like you kicking balls at their house walls but no one thought it necessary to put up signs everywhere saying "No ball games"... Were we that much more reserved with the power that we kicked balls, or are today's adults that much more intolerant and self-centred? Perhaps a bit of both. I can't remember Frank or I ever breaking a window with a ball anyway. 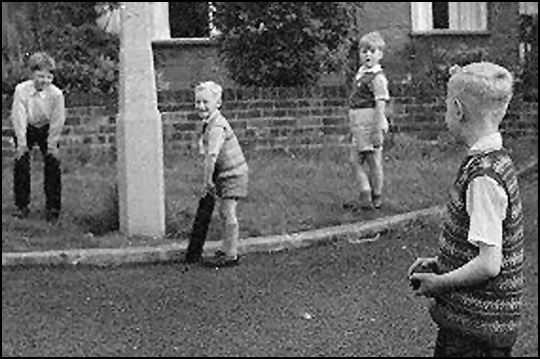 In the photo above, Frank is batting and I'm about to bowl. The photo was taken by Mum who had the unfortunate belief that hair had to be brushed just before a photo was taken. She actually came outside with a hairbrush for this - I remember being mortified... We had a tricycle that we shared. I haven't seen one for years. There were three of them in our street when we were about 7 or 8 years old and five kids to take turns riding them. The two who were not riding played at being policemen on point duty. I haven't seen one of those for years either - traffic lights weren't as common then! 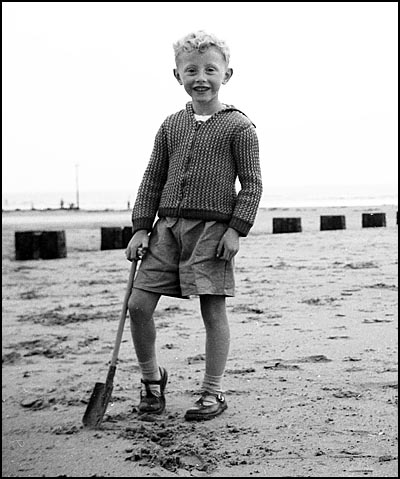 Trips to the seaside, whether day trips or a week's holiday were always exciting things for Frank and I. Day trips meant Blackpool, Morecambe or Southport and holidays in the 1950s and early 60s meant Blackpool, Bridlington or Great Yarmouth. Blackpool was an hour and a half away (the only bit of motorway in existence was a short stretch of the M6 at Preston) but Great Yarmouth was a full day's travelling. Mum and Dad used to settle us in the back of the car in our pyjamas in the early morning hours and we would travel through the rest of the night, stopping to get dressed and have breakfast in Newark, with the river on one side and the castle on the other. "Are we nearly there yet?" 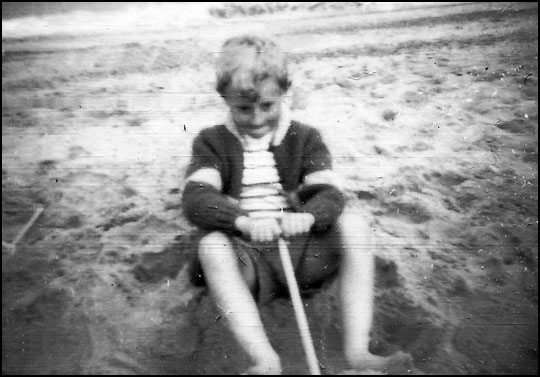 We played for hours on the beach - everyone did. It was free, it was fun, Blackpool and Bridlington had great sand for making castles and sand pies, but Great Yarmouth was rubbish as the sand never got covered by the tide and was always too dry! But it had shells and stones and a low sea wall that was great for jumping off onto the sand. We used to make "boats" in the sand, complete with seats and then the spade stuck in the "dashboard" for a steering wheel. Those early buckets and spades were metal too - jabbing one onto your bare foot could do real damage to your toes! 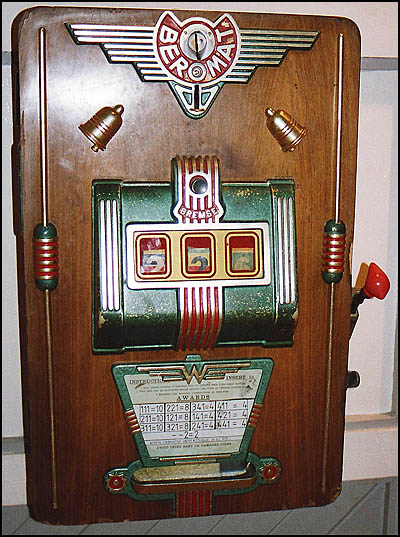 Arcades were full of Edwardian machines like one-armed bandits, Allwins and Bryan's Clocks. Then there were fortune telling machines, strength meters and punchbags that told you how strong a punch you had. Early electric games were rifle galleries and pinball machines. 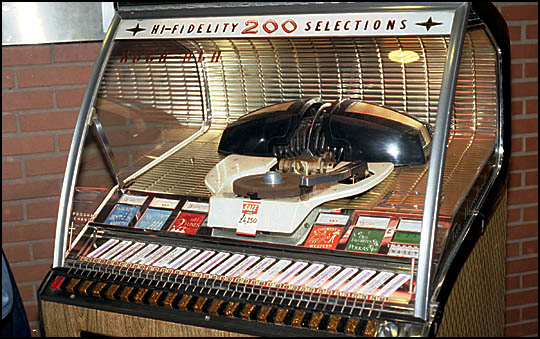 Just about every arcade had a jukebox that played the latest records. Sixpence a play or three for a shilling! We would spend hours around the jukebox, watching the records change and watching the bubbles or colours, depending on the make and model. They only disappeared in the later 1970s when electronic games started making noises of their own. 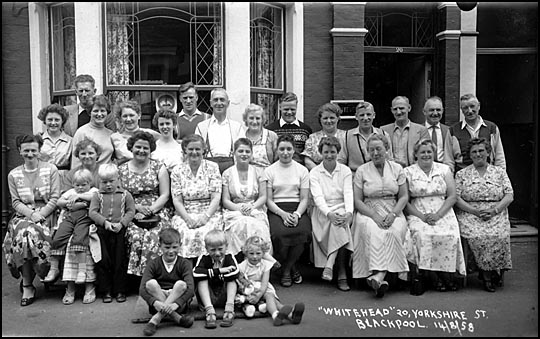 Waking in a hotel at the seaside was wonderful. Seagulls would scream and yakk once it got light. They were hardly ever seen inland in those days, that came later with landfill sites! Early morning coffee shops would open with - oh what memories this brings back - clear glass cups and saucers! Teasmaids were yet to be provided, if you wanted an early morning coffee you had to go out for one! Of course the cafe too would have a jukebox to play!

On a week's holiday we would go to at least one live show. Chart-hitting big name artists would appear at the end of the pier theatres in those days. We saw Cliff Richard and the Shadows a few times, Rolf Harris, Cilla Black, Morecambe and Wise, Mike and Bernie Winters. They were second only to Morecambe and Wise. However, more of this in an entry about live theatre! What I will recall here is how people used to dress up for the occasion of going to a show. Best suits and dresses would come out! 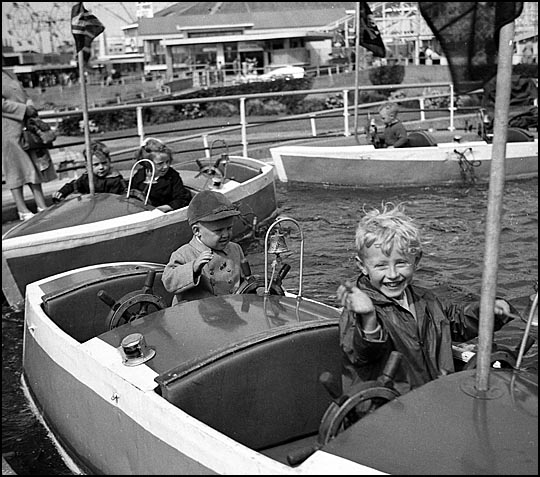 We would want to visit the Pleasure Beach or fairground every day at least once too! Blackpool Pleasure Beach still has a section of smaller rides for the kiddies. In my day it included roundabouts of cars or boats, both of which have long since gone. Still there however, is the fairy grotto with the mechanical man playing the organ. (This article was written in 2006. In 2010 the Pleasure Beach have announced this ride would be demolished to make way for new attractions.) 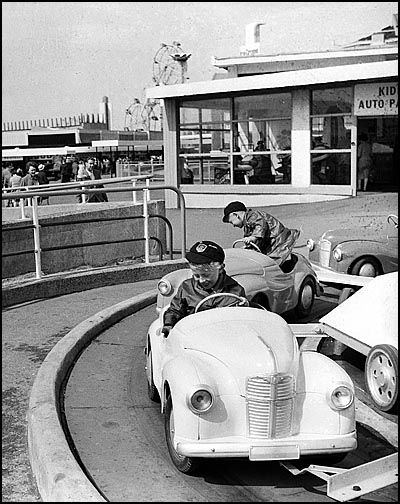 I loved the Big Dipper and the Grand National as soon as I was tall enough to ride them! There were no sissy harnesses to keep you in then - we had to hold on. Another case of having responsibility for ourselves rather than expect to be looked after. It would help if judges stopped granting pay-outs to people who behave like idiots. In those days if you brought it on yourself it was your own lookout! If this seems like a repeated theme here, sorry but I despair when I see a bag of roasted nuts labelled "This product contains nuts"! It's not that the makers think people don't have the brains to work this out - it's because they know some judge will fine them if it's not there and someone with an allergy is taken ill and sues.

Anyway, moving on! Most people set off for home at dinnertime at the latest after a holiday. Mum and Dad used to wait until much later so we would travel through the night again, when it was cooler and the car not as likely to overheat (it was a regular occurrence with cars in the 50s and 60s, of which again... more to come!

Return to Family Memories Index
Posted by John Burke at 07:56