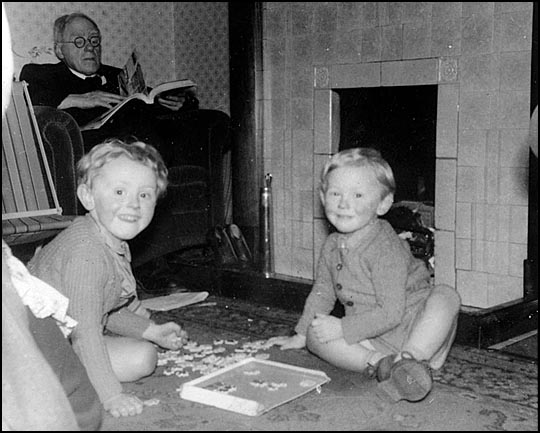 That's me on the left, playing with a jigsaw with my brother Frank, with Great Grandad (known as "t'other Grandad") sitting in the chair. It must have been a family party occasion - on the left of the photo a folding chair awaits a late visitor who has missed their place on the settee (always called a "couch" in those days!) The jigsaw looks to have wooden pieces and would have been moved onto after having mastered the wooden cubed blocks with 6 different scenes to be put together. The paint used would probably have been highly leaded and would have made us ill had we sucked on them too much... In those days kids were expected to eat a certain amount of dirt, dropped toffees were washed under the tap if a grown up saw it fall, or rubbed on a sleeve if not...

The open fire looks and probably is unlit, as a wire mesh fireguard would have been in place to stop us burning ourselves otherwise. A set of fire irons would hang on a stand and include a poker, set of tongs for picking up lumps of coal, small brush and a small shovel. Smokeless zones came in later - we still burned coal which gave off a thick smoke at times and always seemed to require a vigorous poke by grown-ups whenever there was a boring lull in conversation. The coal was delivered by incredibly blackened rough looking men who tipped sacks of the stuff into the coal bunker outside the back door. They would have a wagon full of sacks that quite often was still drawn by a horse, though flat-backed lorries were starting to replace the horses.

Rag and bone men still wandered the streets with a horse and cart, buying odd bits of furniture or old clothes and shouting "Rag'n'BOOOOAN!" - a call that we kids loved to imitate until the rag and bone man got fed up of us and threatened to call a policeman. Now, in case you think "what a stupid, wet thing to try to stop kids shouting", let me tell you that such a threat would be enough to send most kids flying home on the verge of tears! Policemen were "Bobbies" and were partial to giving any troublesome kids a clip around the ear. If you were stupid enough to tell your parents why you were crying then they would give you another for getting into trouble with the police. Don't even attempt to tell me this was cruelty and that it's better now that we can sue anyone who touches us. We learned what was right and what was wrong and we rarely gave cheek to strangers. Well, unless they looked as though they couldn't run fast and there was no one else around... 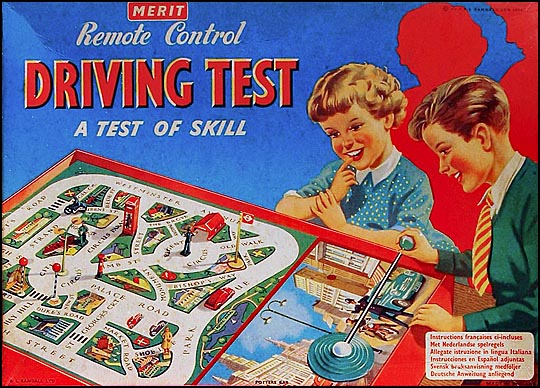 Toys were either unmoving things requiring imagination or were purely mechanical. I had one of these Merit driving games and the "gear lever" style stick operated a scissor movement underneath the playing field, moving a magnet about that would move the model car on the carboard playing surface. It was nowhere near as big as it looks in the illustration! 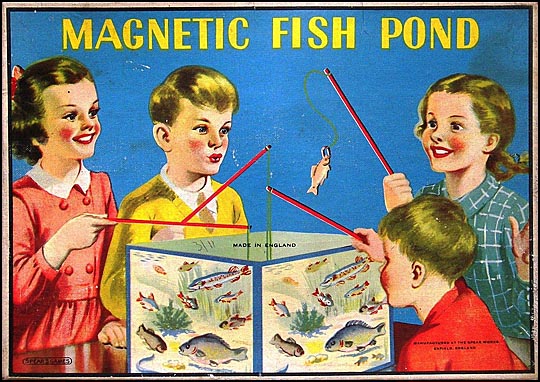 Magnets were a favourite tool of the toymaker - we had magnetic soccer games with long poles to move our players from underneath the playfield table and I had a bus that ran along a track until it zoomed into the "depot building". When it came out it would have been converted from a double deck to a single deck as the roof stuck to the magnet in the depot. A loop of track and it went back into the depot travelling the other way and would pick up the roof again. Magic to our minds! 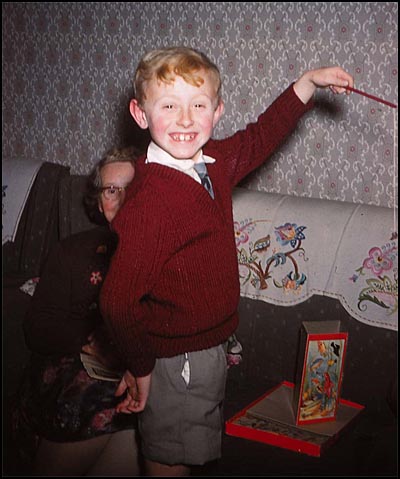 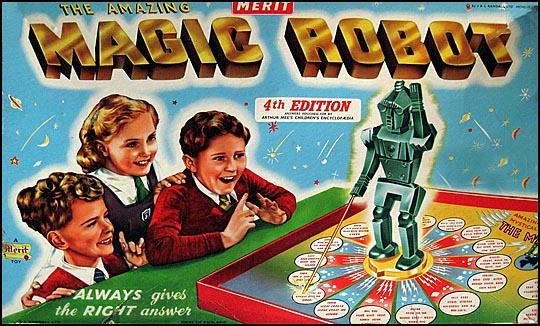 Speaking of magnets and magic, there was the Magic Robot which had a swivelling base. You slotted the robot into it's base on a board and swivelled it until a rod it held pointed at a question. You then stood the robot on a different part of the board, surrounded by lots of answers and it magnetically twizzed round until it pointed at the answer to your question!

We had a collection of model soldiers - plastic models were starting to replace the tin ones. Tinplate cannons had a spring action that you could use to shoot matchsticks out to knock over your opponent's soldiers. 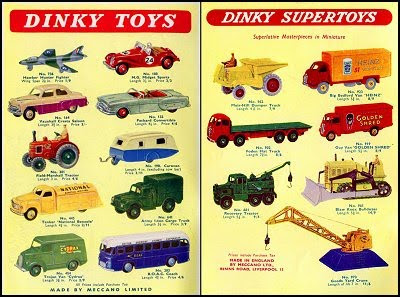 Dinky and the later Corgi toy cars were eagerly collected. In fact I still have some of them! The early ones had no windows or interior fittings and until we were a bit older things like opening doors, bonnets and boots were unheard of! Matchbox cars were fun and cheaper than the larger Dinky or Corgis! Dad still had his Hornby clockwork train set - the scale was such that you could only have a very simple oval track. 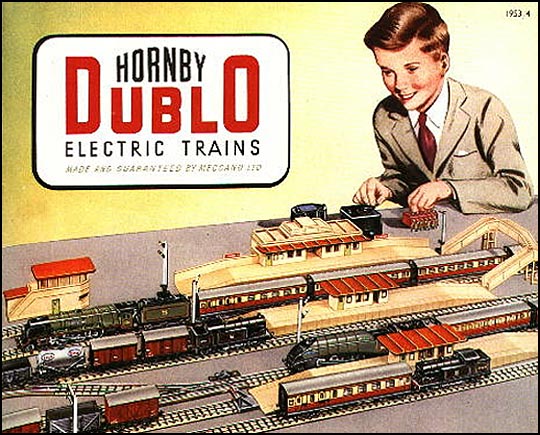 He later bought us a Hornby Dublo set - it had three rails as the engine picked up the current from the middle rail. When we eventually got a more modern Hornby set, we had to replace lots of metal wheels from this set as they shorted out the current which made great sparks but not a lot of movement! 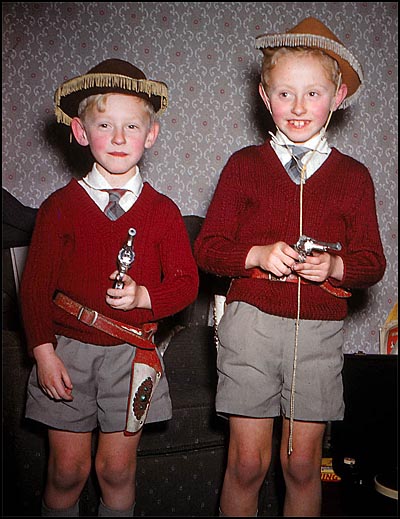 Cowboy programmes were all the range on television and so almost every boy had guns and holsters and would play for hours shooting each other and flopping down on the grass to play dead! Christmas 1961 again. The guns were obviously fake and no one ever worried we were being seduced into lives of violence. If we could afford it we would spend a penny on a roll of caps which exploded somewhat unrealistically in the guns, but were also good fun just thrown on the fire or hit with a stone! 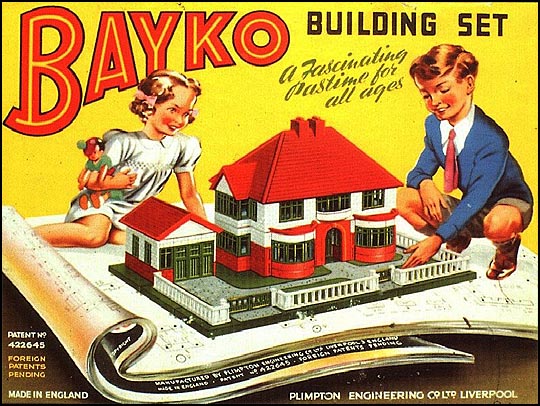 The Danes had yet to unleash Lego on us and the most popular building toy was probably this one - Bayko. Judged as hideously dangerous now because of the metal rods that had to be pushed into a plastic base so that bricks could be slid down between them. I can't honestly remember anyone losing an eye, but I did hurt myself a few times with them I suppose. We just learned to be more careful. As can be seen from the illustration, the houses you could build were definitely not the sort soon to be earmarked for slum clearance...

Our house was not this fine, but neither was it one of the many terraces - for the moment anyway! Even so there were terraces and there were terraces! Not all were slums. All sorts of card games existed - special packs for "Happy Families" and the excellent "Speed" or we would play rummy and chinese patience... At school we would play football, cricket, hopscotch (our junior school had squares already painted out in the yard - that was seen as a bit sissy!) The best hopscotch grids were drawn by scratching a stone on the pavement! Chalk was sometimes used, but not essential! 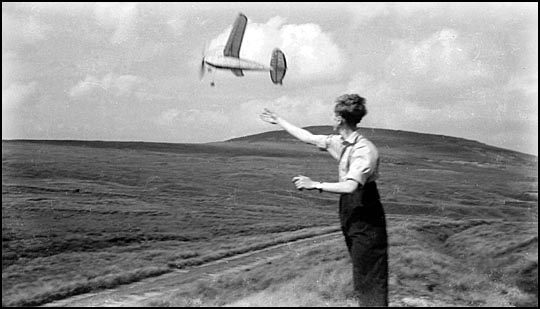 Dad and his brother, Uncle Geoffrey were keen model aeroplane enthusiasts. Radio control was unheard of at the time. They made gliders, models powered by rubber bands and control-liners with a real engine. These had wire cables to the wing tip attached to the rudder. You unrolled control wires about 50 feet to a handle and then the plane flew around you in a circle and by tilting the handle you could make it go up or down until it either crashed, ran out of fuel and crashed, or you got dizzy, fell over - and it crashed... 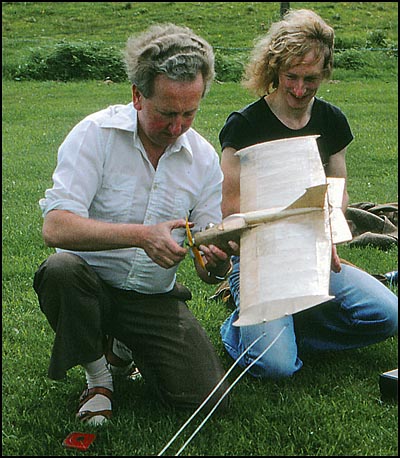 They had engines that used ethanol or diesel fuel that you started by flicking the propeller with a finger. You had to be quick or the prop would whiz round when the engine fired and whack the back of your finger hard enough to draw blood and hurt a lot! The photo shows Dad and Frank in 1982 having a bit of a reprise of this activity.

Return to Family Memories Index
Posted by John Burke at 20:09