Heywood Grammar School was a bit old fashioned, formal and yet a place of great fun. 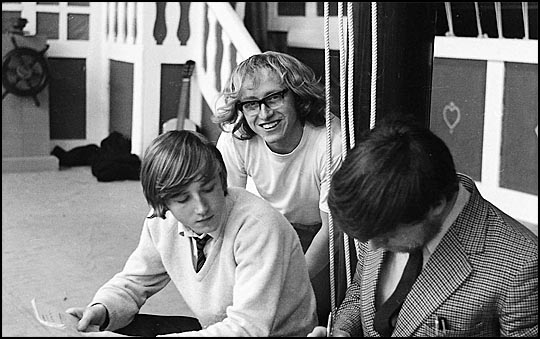 The first day there, way back in 1965, is remembered in a previous entry and that introduced some of the characters. There were so many more though.

A few years above us there was a lad whose nickname was Prof. I don't think I ever learned his real name. He had a book of double entendres, collected from the sayings of the Headmaster, which he called "Farish Funnies". It was full of things like "I'm not having you boys bringing your dirty balls in here..." or "I'm not having it! Mr Thomas isn't having it - and I'm damn sure Miss Woods isn't having it!!!"

I hated PE. I'd been afraid that the asthma would cause me real problems but it was mainly only the cross country runs that I found impossible. The first one started with a circuit of the playing fields then out onto the roads. By the time I was halfway round the playing field I was in trouble and by the time I got to the gate where the teacher was, I was ready to lie down and collapse, my breath coming in great panting wheezes.

Mr Law grunted, "Asthma?" I nodded, unable to speak. "Back to the changing rooms then," he said. That was the only Cross Country I ran. There were about 5 of us who were excused them and we looked forward to the afternoons when everyone else was sent to run round the streets of Heywood. We were sent out to leisurely walk the streets of Heywood. 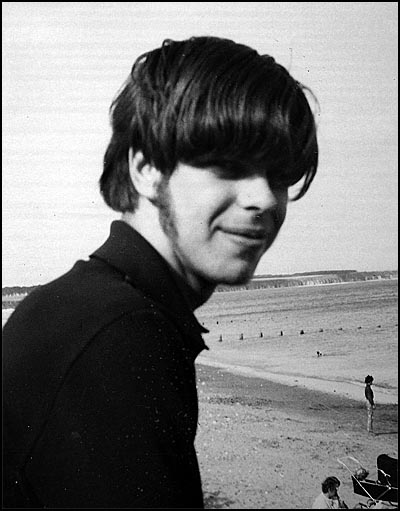 A particular mate of mine was Andrew Robertson. For some strange reason we all christened him Sid. I can't remember why but he became Sid for the rest of his school career. Mum and Dad liked Sid because he made them laugh. He made all of us laugh. This was mainly because he liked to laugh... In fact once he started he couldn't stop! He would go off into weird and wonderful paroxysms, food flying from his mouth, should he have recently inserted anything and this would go on many a time until he was helpless with laughter and had infected all around him.

Except for once when he had undergone one of these transformations during a dinner hour. A workman who was digging the road up thought that he was the one being laughed at and Sid arrived back at school with a black eye. He had another bout of uncontrolled laughter trying to tell us how he got the black eye...

Sid was another fan of flying model aircraft and he also introduced me to a mate of his called Paul Fitton, who was in the year above us and who introduced me to the music of The Moody Blues. Paul had a superb hi-fi setup in his bedroom and also had the first set of stereo headphones I ever listened to. I was so impressed I bought the very same model. Hands up today any teenagers who were 14 before they heard music through headphones...? 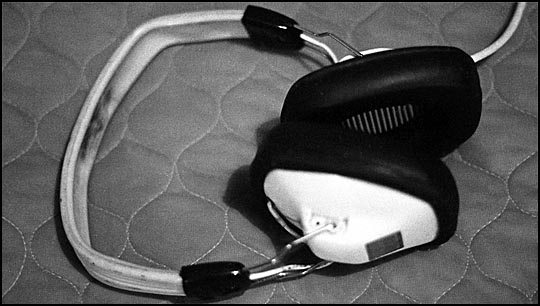 Now I can't condone the next bit and certainly do not suggest anyone else try it, but for a while there was a craze (limited thank goodness) of making rockets from a mixture of readily available household products. Those doomed to abject failure mixed powders and filled tubes with this. It was highly explosive - I remember it being in the news that someone had made exactly the same mixture to blow open the coin box of a public telephone only to blow his hand off... 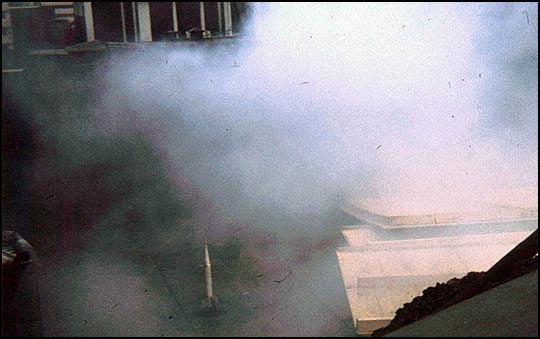 We made solutions of it and soaked newspapers in it. Then - here's the most dangerous bit - we dried the sheets over the fireguard of an open fire and rolled them up before stuffing them into cardboard tubes. Most failed to move - as shown, they produced lots of smoke and a roar of sorts but failed to lift off. Bic pen tops you could make whiz about - possibly the reason Bic seem to make them open at both ends these days... (correction from schoolmate Alex Dyson: it's actually because so many people suck the tops of pens and get them lodged in their throats - you can still breath a little through the hole...) Anyway Frank and his mates had to go one better and made a 3-stage 6-foot tall monster. Displaying "WRN" which stood for "Wardle Rocket Network", they took it up on the moors, lit a long fuse of magnesium strip and took cover behind a small hill.

The explosion was apparently heard half a mile away... The explosion was caused only by the bottom stage however and the top two stages, when rested on a plank of wood as a runway, actually took to the air for about 3 feet before turning to crash in the field. It was impressive looking but hardly aerodynamic! Cine film of this event exists. Wardle had had a flying saucer incident in the late 1950s and residents must have wondered whether the aliens had returned that day!

That marked the end of Frank's rocket aspirations but we in the 5th form were impressed at the success of the plank runway and devised a cunning plan. We reckoned that a 1-foot tall rocket launched from a high window via a runway would fly. We made the rocket, took it to the chemistry laboratory on the 3rd or 4th floor, borrowed a couple of test tube stands to make up a runway of smooth metal rods, poked them out of the window and lit the fuse.

Disaster! A gratifying roar heralded a ten inch flame shooting from the back of the rocket but it stuck on the test tube stands and scorched and blistered all the paint off the window sill until I tipped the whole lot out of the window with visions of a full-scale fire. The Lower 6th Form common room was directly underneath on the ground floor and I remember one lad telling me later of the impressive fireball that fell past the window closely followed by a couple of clanging bits of chemistry equipment...

We got in surprisingly little trouble - I think the chemistry teacher must have been secretly impressed with the sheer cheek. We did have to buy paint and repaint the window sill...

Return to Family Memories Index
Posted by John Burke at 07:27