The Dardanelles Straits and Gallipoli

Friday, 20 August 2010. The Thomson Celebration spends another day at sea. We spend the day reading. Er... I mean we pound ten times around the Promenade Deck and then when we've worked a sweat up we visit the gym for some gruelling workouts. Well... perhaps it was reading after all... 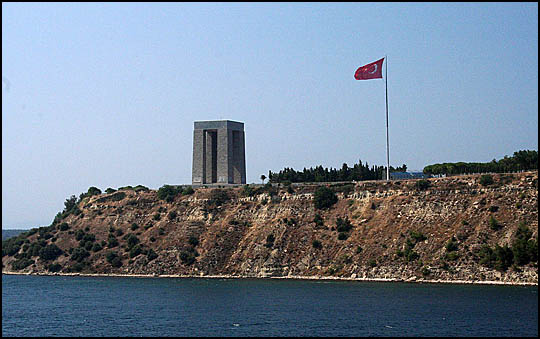 Around 4:00pm we are passing through the Dardanelles Straits. As we approached the Gallipoli peninsular many passengers gathered on the Promenade and upper decks and the Cruise Director began a commentary over the tannoy which covered both the naval actions during the Crimean and the costly action during World War One. The photo shows the Turkish monument to the fallen.

It bears this inscription from Mustafa Kemal Atatürk: "Those heroes who shed their blood and lost their lives, you are now lying in the soil of a friendly country. Therefore rest in peace. There is no difference between the Johnnies and the Mehmets to us where they lie side by side in this country of ours. You, the mothers who sent their sons from far away countries wipe away your tears, your sons are now lying in our bosom and are in peace. After having lost their lives on this land they become our sons as well." 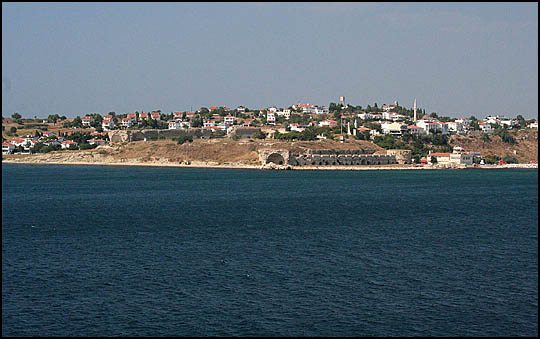 The commentary was very moving. The landscape we looked on so bare and so obviously capable of being heavily defended. The commentary included the words of the song "And the Band Played Waltzing Matilda", written by Eric Bogle in 1972 after watching a parade of veterans.

When I was a young man I carried me pack
And I lived the free life of the rover
From the Murray's green basin to the dusty outback
I waltzed my Matilda all over
Then in 1915 my country said: Son,
It's time to stop rambling, there's work to be done
So they gave me a tin hat and they gave me a gun
And they sent me away to the war

And the band played Waltzing Matilda
When the ship pulled away from the quay
And amid all the tears, flag waving and cheers
We sailed off for Gallipoli

It well I remember that terrible day
When our blood stained the sand and the water
And how in that hell they call Suvla Bay
We were butchered like lambs at the slaughter
Johnny Turk, he was ready, he primed himself well
He rained us with bullets, and he showered us with shell
And in five minutes flat, we were all blown to hell
He nearly blew us back home to Australia

Oh those that were living just tried to survive
In that mad world of blood, death and fire
And for ten weary weeks I kept myself alive
While around me the corpses piled higher
Then a big Turkish shell knocked me arse over head
And when I awoke in me hospital bed
And saw what it had done, I wished I was dead
I never knew there was worse things than dying

Oh no more I'll go Waltzing Matilda
All around the green bush far and near
For to hump tent and pegs, a man needs both legs
No more waltzing Matilda for me

They collected the wounded, the crippled, the maimed
And they shipped us back home to Australia
The armless, the legless, the blind and the insane
Those proud wounded heroes of Suvla
And when the ship pulled into Circular Quay
I looked at the place where me legs used to be
And thank Christ there was no one there waiting for me
To grieve and to mourn and to pity

And the Band played Waltzing Matilda
When they carried us down the gangway
Oh nobody cheered, they just stood there and stared
Then they turned all their faces away

Now every April I sit on my porch
And I watch the parade pass before me
I see my old comrades, how proudly they march
Renewing their dreams of past glories
I see the old men all tired, stiff and worn
Those weary old heroes of a forgotten war
And the young people ask "What are they marching for?"
And I ask myself the same question

And the band plays Waltzing Matilda
And the old men still answer the call
But year after year, their numbers get fewer
Someday, no one will march there at all 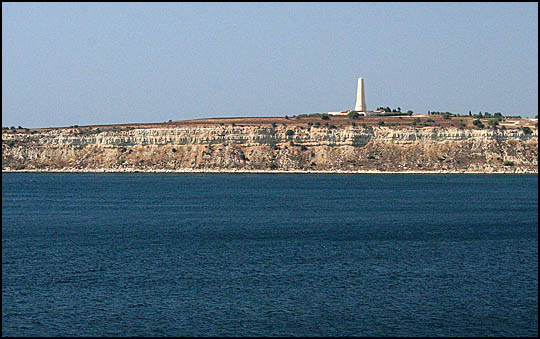 The British memorial. Our tears fell to the memories of those thousands of casualties, whether British, Australians and New Zealanders or Turkish.