More from the now-vanished Nostalgia web site. My very earliest memory is of an incident that happened when I was two. We had moved from living with Nana and Grandad to a terraced house of our own in Albion Street, Castleton. My Dad was ill and in bed. He had had asthma from being a young boy and he was particularly bad at this time. I remember running up the stairs behind Mum and going into their bedroom and seeing him hanging out of the bed in a state of collapse.

That one scene fades into another where I am looking out of the window of "Aunty Sally" our next door neighbour, watching the ambulance come for him, emergency bell ringing. 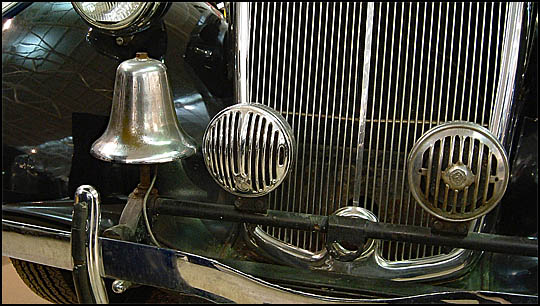 Sirens did not come into use until much later and in 1956 ambulances, police cars and fire engines had an electric bell on the front to clear traffic. There was much less traffic anyway and very few of those very few cars had a radio, much less some form of personal music player in their car to block outside sounds out.

Dad's lung had collapsed with the strain of trying to breathe. He was taken to Rochdale Infirmary where the doctors said if the traffic lights had been on red he would have died on the way to the hospital. I only mentioned this memory to Mum when I was in my 30s or 40s and she said it explained why I used to have nightmares after that day for a few weeks. She said Dad's face had already turned blue. My memory is just black and white and I hadn't remembered that.

When I was seven I started to develop asthma myself. Trying to run more than a few steps brought on the most horrendous attacks of it. I could breathe in but breathing out had to be forced and I wheezed and gasped for breath. Aerosols were rare for any purpose - for inhalers they definitely were not in use. The remedy was to measure an amount of liquid into a glass bubble affair with a rubber bulb underneath. The bulb forced the liquid into a fine mist spray which came out the top of the glass bubble into a tube which led to a hard black plastic face mask which covered the nose, mouth and most of my cheeks and chin. It took around 20 minutes hard pumping on every inward breath to calm an attack.

It seems an incredible amount of time now when modern inhalers have an immediate effect but once the aerosol inhalers came in, the old type were still sold with the slogan "An overdose would be beyond the strength of an average man"! Asthma shaped my life from age 7 until my twenties. I was unable to do most sports so have never had an interest in them. Instead I took up music in the shape of the guitar at 12.

For a couple of years I went to a chest clinic at Rochdale Infirmary two mornings a week. I suppose I'd be between 7 and 9. All I can remember is a group of about 20 kids all around the same age, some of whom seemed to have nothing wrong with them and others who were the same as me, and one or two who wheezed and gasped all the time. We did gentle exercises, lay on mats for an hour's sleep then had a competition to see who could blow a bit of cotton wool the furthest along a table.

As a result of those exercises I now have a lung capacity in excess of most healthy people!

I seem to remember sitting with goggles on huddled around a very bright light, which would have been a sun lamp. Sunshine was thought to be good for all sorts of ailments. Some schools were built with special glass that didn't block UV rays - kids tanned as they sat in class... When Ventolin came out I was on it for 25 years, taking 2 puffs at least 8 times a day, more on most days.

An earlier visit to the infirmary came when I was 3. Dad was cleaning out the gutter at Castleton and looked down to see me rubbing my eye. He was horrified to see it bulging out of the socket and, unable to see the cause, took me up to the infirmary. I can't remember this incident at all, but he told me years afterwards that the doctors had taken from the back of my eye socket a long piece of string that had fallen from the gutter into my eye and my rubbing had wound it around the eye inside the socket.

All I remember about the event is that after coming from the infirmary he told me I'd been very brave and that he would buy me any record I wanted. I had no idea what I wanted but we went to one of the two shops in Rochdale that sold records and I stood looking in the window at a display of lots of 78rpm discs, pinned up on a display, pointed and said "That one..." What he bought me was Don Lang's "The Witch Doctor" which I still have in my collection of 78s from that time.

It was important to catch some of the childhood illnesses early. Mumps was a case in point - horrible symptoms in post-adolescent males! If you caught it, your Mum would tell all the other mums and that night after school you had all your chums round to play in a darkened room whilst the grown-ups sat anxiously waiting for the swollen glands to appear...

We had polio jabs and sometimes took the polio vaccine by eating a lump of sugar or a jelly baby that had been squirted with it!

At least some of the real child-killing diseases had been got rid of. As a child, Dad had caught Scarlet Fever. He had been taken into hospital and not allowed visitors at all as it was so contagious. "When it was visiting time all the parents would gather at the railings around the hospital," he told me. "Nurses would make you stand at the window and tell you to wave at your Mum and Dad. Even if they were there, they were so far away you couldn't make them out in the crowd, but you waved anyway... I was lucky - lots of the kids died."

Perhaps "nostalgia" isn't quite the word for this entry...

Return to Family Memories Index
Posted by John Burke at 20:50