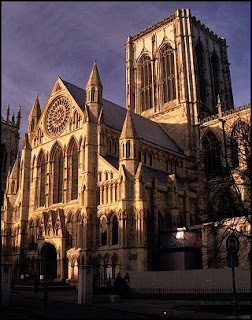 This evening shot of York Minster was taken in December 1997 and I was lucky in getting the low winter sunlight on the front of this glorious cathedral.

Earlier in the year I had climbed up the tower - a rather testing feat of legs and stamina! What a view from the top though!

The Minster is one of the most beautiful cathedrals in England and is set in the heart of a city with plenty of sights and attractions. It is well worth a visit for anyone who has the chance.

We have missed going this year - a visit to York in December has been a regular occurrence for several years but this year, somehow, we haven't made it.

Yikes! 2009!!! It only seems like 5 minutes ago there was all that fuss over the new Millenium!

Large version of the photo: York Minster
Posted by John Burke at 09:11