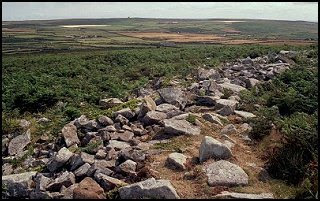 We drove with Mum and Dad round the coast past Zennor and climbed a gorse covered hill towards Chun Castle, an iron age hillfort.

Britain was cut off from the rest of Europe when the last ice age melted and whilst the first cities were being built in the middle east the British were still living in stick and mud huts in fortified circles on the tops of hills.

The gorse was in abundance - the farmer on whose land we parked told me the weather "...has been very good for the shrubs this year!" The gorse looks lovely from a distance. Close up it has small two inch branches covered in spine like leaves which just then were pricking through trousers and skirts and up to shirts and tops as the bushes were anything up to 3 feet tall!

Chun Castle boasts the foundations of much of its surrounding defensive wall, now reduced to what looks like a pile of rubble in the shape of a huge ring. It has a couple of gateposts still standing. 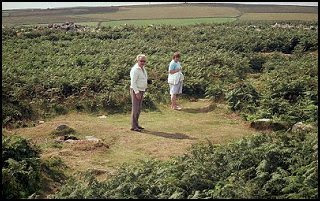 In a clearing in the gorse which now covers most of the interior, the castle's well, choked with fallen stone can be seen.

The hillfort is in a superb position on the Lands End peninsula and you can see both the south and west coasts from its wall which afforded its residents some amount of warning should an enemy appear.

Also clearly visible that the residents would not have been familiar with are the remains of a couple of the distinctive engine houses of Cornish tin mines.

Mum had given up in the face of the gorse (well it came farther up on her than anyone else as she's a bit smaller than the rest of us!) and she had gone back to sit in the car whilst we explored.

Fran and Dad decided to go back and keep her company. Meanwhile I have one more thing to see which will take me back in time a further two to three thousand years from the hillfort. But that, as a quizmaster would say just before a TV break, is why you will come back tomorrow - won't you?

Large versions of the photos: castle wall, Fran and Dad near the well
Posted by John Burke at 09:10