A Deathly Game of Quoits 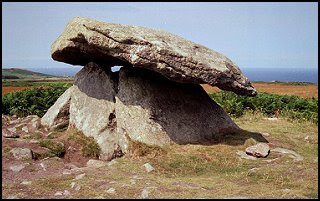 Dad and Fran left me at Chun Castle and I walked a couple of hundred yards to Chun Quoit, a megalithic burial chamber.

This was older than the nearby hill fort by two or three thousand years.

It was originally built to house the ashes of one of the race of stone age "Beaker" People - so called because they were cremated and interned with their ashes in earthenware pots the shape of beakers.

I walked round the quoit, savouring the atmosphere of the place and set up the camera on the ground to take a self timer photo of myself. I'll spare you that one as there's another - equally gruesome - to come...

The quoit would originally have been covered by a mound of earth to make a barrow or tumulus.

I braved the gorse spines again and returned to the car and we drove about half a mile to another quoit, Lanyon Quoit. 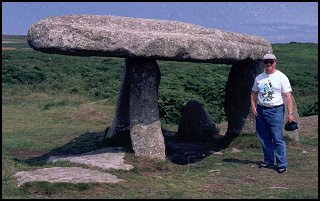 Easily found in a field just at the side of the road this quoit was originally tall enough for a man on horseback to ride underneath the capstone without bending his head. My sense of humour would like to say that this is because the horse's head would have crashed into it first, but in truth it was indeed possible to ride beneath the capstone!

A violent thunderstorm in 1826 caused the quoit's collapse and it was re-erected, but with the supporting stones sunk deep into the earth. The people of 1826 were taking no chances...
"I'm not lifting yon bloody stone again and that's for sure!"

The cromlechs or quoits of Cornwall are as mysterious and atmospheric as you can make them. Lanyon is a bit too close to the roadway to have an atmosphere. At Chun Quoit you can be quite alone with this mysterious chamber of the dead. Would you dare go at night to see if any spirits remain?