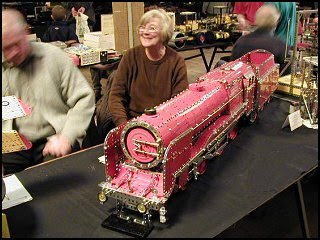 I watched the repeat of James May's Top Toys on BBC2 on Sunday and thoroughly enjoyed it.

Apart from the fact that he had come up with exactly the same design for a Lancaster bomber as my brother Frank and I used to make with Lego and had the cheek to claim it as his own, I have to agree with him that today's toys, including those still around from 40 years ago like Lego and Meccano, are absolute rubbish.

When we used to play with those building toys you had a pile of bits, either metal rods, bars, nuts and bolts, or square and rectangular bricks and then you used your imagination to build something.

These days Lego kits and Meccano kits all contain specially shaped pieces designed to build just the one particular model that is shown on the box. Since the 1980s we have been breeding generations who have never needed to use their imagination and, as a consequence, many people don't have one.

Whilst I was looking for the photos to accompany the last blog entry on Austria, I found these photos from a visit to a modelling exhibition in Fleetwood in 2000.

The chap who built that marvellous model of a steam engine in Meccano didn't do it from a set of instructions I'm sure. 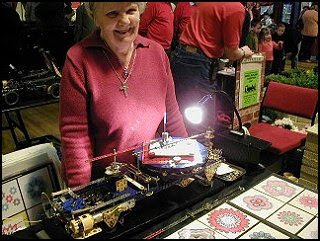 And there was this ingenious device. Hardly a work of art in itself, but this complicated set-up of cogs, chains and pulleys was turning out works of art like the one shown below.

Rigged up to a turntable, the device had a pen holder in the shape of a drum with a hole in it that you could drop a ballpoint refill down and it then drew the pen back and forth whilst the turntable revolved slowly. The other bits and pieces varied the length of the stroke to come up with all the intricate geometric designs that later generations would create using Spirograph.

Many towns have a modelling society and many of them have an annual exhibition. They are well worth going to have a look at if you get the chance.

I'm sure I saw something in the paper the other day about another one in Fleetwood... What, Fran? Oh... I'm supposed to be tiling the kitchen...? 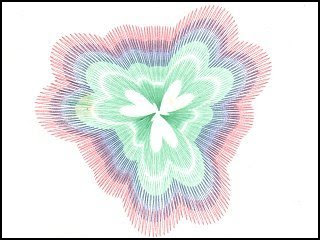