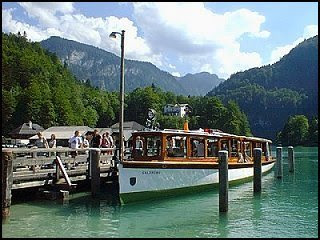 We were on a coach holiday with Leger and were touring the Austrian Tyrol. On this particular day we spent the morning in Bavaria in Berchtesgaden.

After lunch we got back to the coach and motored on for another while before coming to Königsee. We learned that the "see" part of the name meant "lake".

In the case of Königsee it was a crystal clear turquoise lake with tiny fish darting from underneath at any bread thrown to the ducks. We had been told there would be time for a boat ride across the lake and back before the coach left, but there was a huge queue and we decided instead to go up the Jannerbrau mountain by cable car.

The cars turned out to be quite effective ovens and we were boiling by the time we reached the top of the mountain 30 minutes after climbing into the small fibreglass pod! 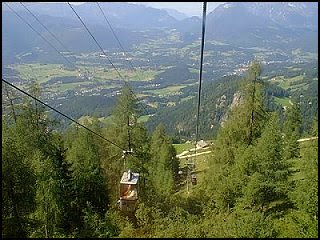 There was some lovely scenery as we climed steadily upwards, but we were a little disappointed to find there was no clear view of the lake. We caught glimpses of the edge of it from time to time.

At the top there was a cafe and bar and we were able to cool down for a while before clambering back into our own personal sauna for the ride back down.

Once back on the coach we had to wait for a family of four, who had been assured by the joker in the boat ticket office that there would be plenty of time for them to take the boat trip and be back for the coach.

They had jumped ship at the very first stop and then persuaded 100 people to let them queue jump and still arrived back at the coach half an hour after the appointed time.

"But was it worth it?" one of the other passengers wanted to know.
"No!" he was assured, "we spent the whole time petrified the coach would go without us!"

Note: I have no larger versions of these photos, sorry! Here's another to make up for it... 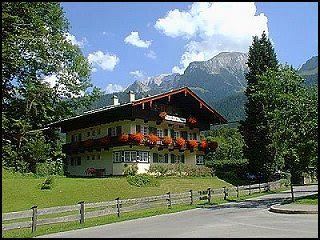