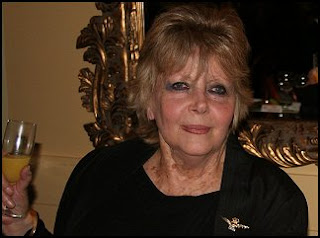 Just as the very first signs of approaching flu and galloping gobrot appeared, Fran and I were in best bib and tucker at the annual birthday and fan club reunion of actress Ingrid Pitt.

Since the big birthday last year I think she's trying to play down the birthday part of the event and concentrate on enjoying herself with a large group of friends who over the years have included some very famous faces.

There's always a sprinkling of well known and "isn't that...?" faces and this year was no exception with Celia Imrie in attendance and enjoying herself on the top table. Pat Lasky was there again and, whilst some may not remember the name, she was an actress under the name of Barbara Hayden and married Jesse Lasky Jr, son of the Jesse Lasky who made Hollywood's first full length movie.

Maureen Barrymore the Vogue photographer was there again - I sat opposite this beautiful lady a couple of years ago to great jealousy from all the other male regulars! She has a history as a model and was so successful as a go-kart racing driver she was booted off the team by the jealous male drivers!!!

This year we sat opposite Edward Morley and his party so it was a jolly night. Photos of the event can be seen as a collection at my Flickr account.
Posted by John Burke at 09:30