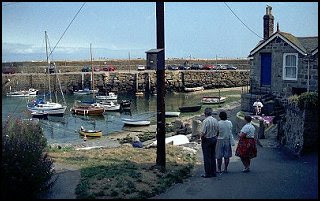 After the stones we stopped in Mousehole, which the locals pronounce "Mowzil".
A bit like Polperro this is a small fishing village, but this is much more relaxed than Polperro.

It's one of those places where you can sit and relax and just drink in the unhurried atmosphere. The harbour is extremely pretty but nowhere near as busy as Polperro. There's a small beach that faces the harbour with sand at one end with pebbles making up the rest.

Chains snake down from their anchoring point on the wall behind the beach to individual boats that either bob on the water or, at low tide, tilt attractively on the harbour bed.

Not that this picturesque quiet place has always led a sheltered life. 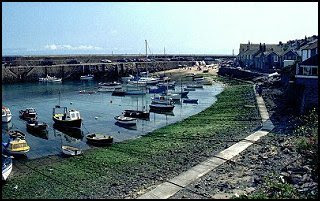 A placque on a wall reminds us that the Spanish landed here and ransacked the place, killing inhabitants left and right. This was, admittedly, a few hundred years earlier than 1996 so we felt safe enough...

I sat on a bench next to a sleeping black cat and did a sketch of the some of the buildings facing the harbour.

On the next bench a man was painting designs on round stones in water colours, presumably to sell as paper weights. I got sunburnt a bit on the back of my neck!

Large versions of the Photos: walking to the harbour, the harbour
Posted by John Burke at 07:58