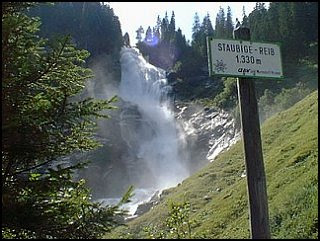 Our friends Chrissie and Alex visited Austria this year and made a trip to Krimml Falls. Chrissie has uploaded some of her photos to Flickr.

We were there ourselves on Friday 18 August 2000 and she was asking how far up we got. My photo here shows exactly how high we went.

It was a hard slog up some very steep pathways, that zig-zagged up the mountainside. The height at the coach park was 1100 metres above sea level. We reached 1330 metres so in the limited time that we had, we had climbed the equivalent of one and a half Blackpool Towers! 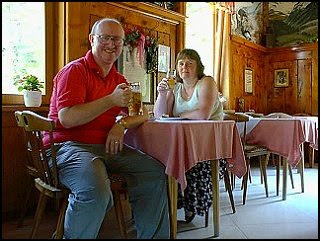 Chrissie asked if we got as far as the cafe and to prove it here we are - on our way down, I might add - having our lunch all on our own!

We'd been told not to miss having some Wiener Schnitzel. It was excellent and we both enjoyed a really great dinner.

We ordered in German and after a while a waiter came in and rattled something off that I didn't catch. Presuming it to be "Is everything ok with your meal?" I answered cheerily, "Ja, danke!" on which agreement and thanks, he opened the windows, turned the stereo down and left...

I'm afraid I haven't any larger versions of these photos. From around 1997 I started to take digital photos, using the film camera only sparingly. The early digis weren't up to large format photos so there is a bit of a gap in my collection of large photos until around 2004 when I started saving photos at 800x600 size.

Here are a couple more of Krimml though! 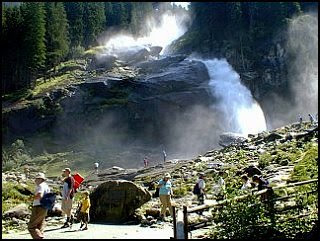 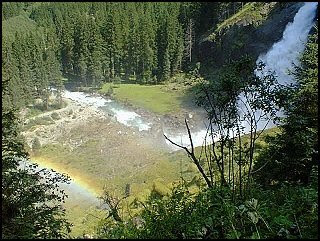 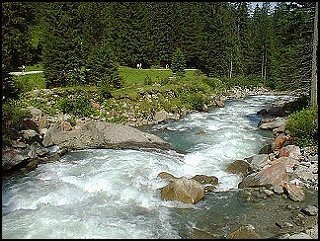