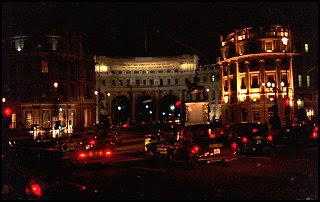 Someone was very quick off the mark this morning.

As I uploaded this photograph of Admiralty Arch at night up to Flickr, someone had viewed it and left a comment on it even as I was still editing the title and tags!

It's another of the photos I took on that weekend trip in December 1995. I've always liked night photography, though in the days of film it used to be much trickier than it is these days with digital cameras coping with low light levels.

We spent ages wandering around London that first night, photographing floodlit buildings and of course, as it was December, it went dark very early anyway! 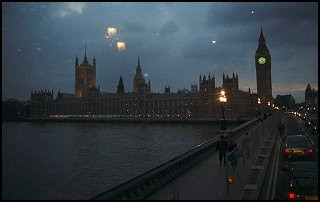 Here's one that was taken from one of those open-topped tour buses as we crossed Westminster Bridge towards the Houses of Parliament. It was dusk and the lens picked up those strange relected images of street lights, placing them to float in the sky.

We found a discount theatre ticket office and booked to see the life story of Roy Orbison the following night. So we ensured our second night might be a little warmer than the first!

Large Versions of the Photos: Admiralty Arch, Westminster Bridge and Parliament
Posted by John Burke at 17:16