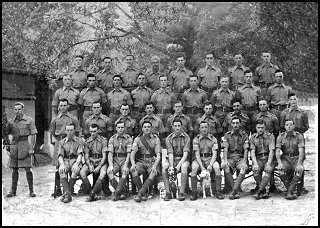 Amongst all the old photos being scanned are some older photographs from both sides of the family.

This is one from Fran's side. Her dad, Bob Perks, is second from the right of the front row. He joined the army in 1937 and by 1939 had been transferred to the Leicestershire Regiment.

He served in India on the North West frontier and then to Singapore. He was taken prisoner by the Japanese on 15 February 1942 and remained so for 3 years and 239 days, being required to work on the Burma railroad.

Never once did he talk about his experiences to the family. His wife, Peggy, even in the 1990s, would say "What did the Japs do to you in the war, Bob?" and would get just a terse "Nowt!" in reply.

Whatever the real story, spending 3 years and 8 months in the conditions that there must have been would have been no picnic.

The photograph started out as a dark brown scrap of torn paper, creased and with chunks missing. I've spent hours trying to reconstruct it. At least one person had lots of damage across his face and so apologies if anyone knows the regiment and fails to recognise someone they are looking for.

Large Version of the Photo: Leicestershire Company
Posted by John Burke at 08:20