Tuesday, 26 August 2008. The coach brought us back from Rome to the port of Civitavecchia where the Island Star was docked at the end of a road leading past a moored tall ship and a fortress. 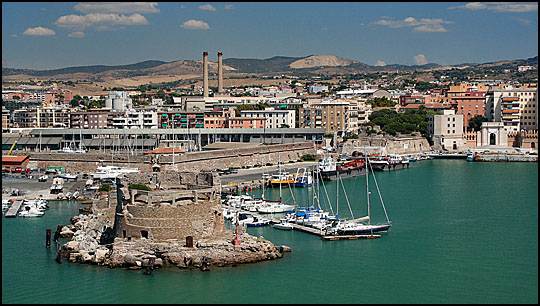 We had lunch and as the ladies prepared to while away the afternoon on the pool deck, after a morning sitting on a coach I was feeling the need to stretch my legs a bit so I took the camera and walked back past the fortress to have a look at the ship. 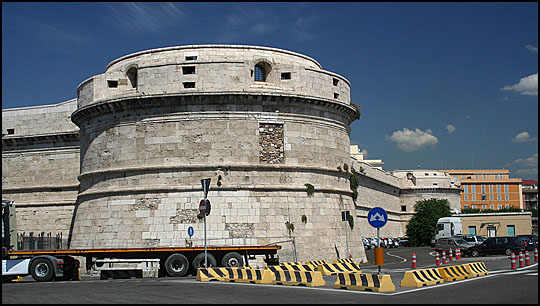 It was a bit deserted on that part of the dock! I saw only the cabaret act from the night before who was on his way back home with his wife and who had also had the same thought about wanting to photograph the sailing ship. Apart from that there was a young local couple with a baby in a pram and that was it. Eerily quiet. I took this photograph through the bars of some railings, but then found that by walking a bit further I could pass through an open gate and round onto the wharf where the ship was moored. It was the Signora del Vento and seemed as deserted as the dock itself. The three-masted schooner was built in Poland in 1962. She has been a training vessel since the 1990s and was bought in 2006 by the Italian Society of Navigation. Apart from her training vessel duties, as part of which she partakes in many rallies of tall ships around the world, she can be hired for private and corporate events, offering meeting space and fine dining. 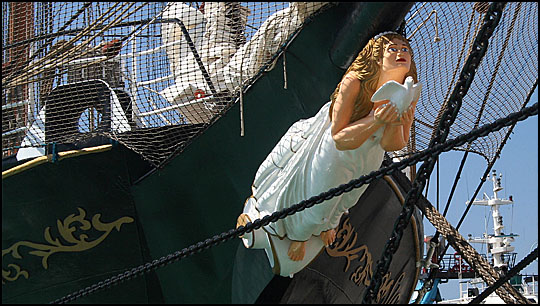 The figurehead was a female figure holding out a white dove and was carved by Birgit and Claus Hartmann. I dawdled past the fortress and took a couple of photos and then made my way back to the ship, being challenged by the official in the hut at the barrier onto the quay where the Island Star was berthed. Showing my boarding card was all that was required, but it's nice to know the port authorities were stopping unauthorised people from trying to get on board. We noticed similar checks at a couple of other ports in the week too. I can't remember being checked so diligently by port authorities on prevous tours, but it was more reassuring than annoying! 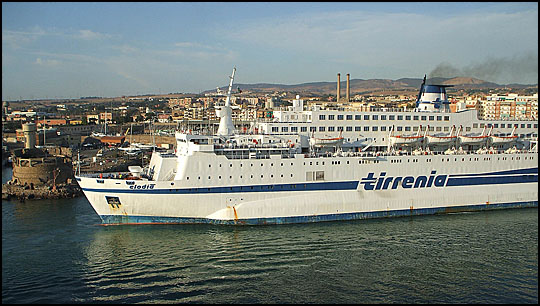 Back onboard the Island Star I rejoined the ladies, reading, lazing, dozing and watching any ship movements in the harbour. The Clodia was one of six sister ships, but was the only one to be built in the Sestri Penente shipyards in Italy. Dating from 1980 she originally catered for 1000 passengers and 470 cars. She was enlarged twice, in 1986/87 to carry 2000 passengers and 610 cars and in 1992 to carry 2280 passengers and 650 cars, which reduced her speed from 20 to 17 knots. 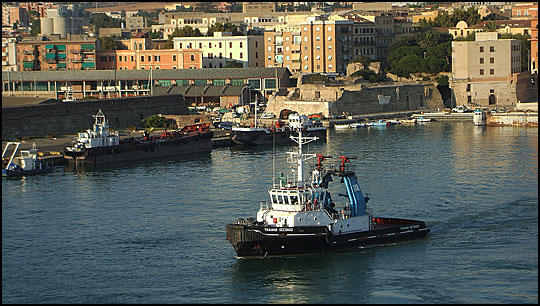 Civitavecchia insists on ships using its tugboats. Use of side thrusters is not allowed. Captain "JC" remarks that this is purely a money making venture... 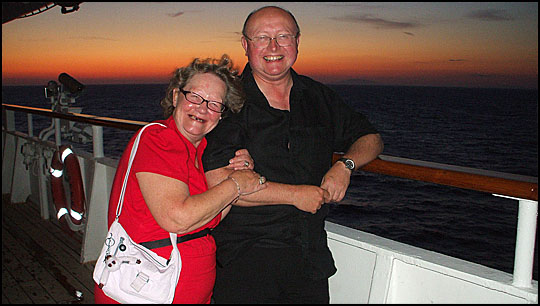 Out at sea, it's a warm night and we are out on the Promenade Deck to watch the sun go down in a blaze of orange and red. 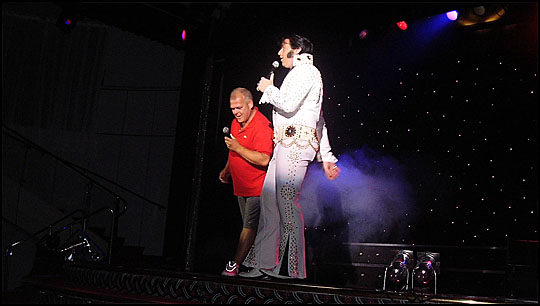 The show tonight is a guest cabaret, Joseph King giving a tribute to Elvis. He must be Joe King... One chap is wildly enthusiastic and is invited onto the stage, but then to Joseph's surprise, doesn't know the words at all and instead breaks into a hilarious dance that totally stops the show and has the audience in stitches.